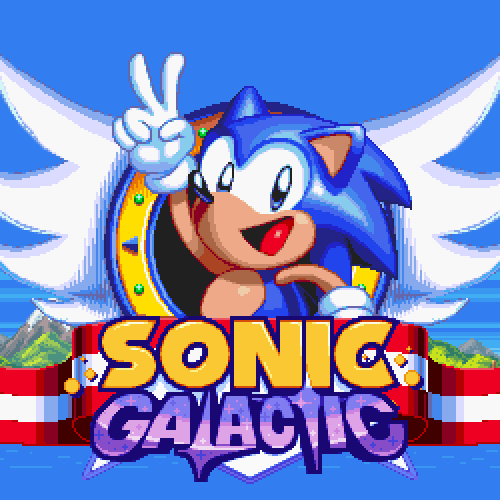 Hello, and welcome to the page! This page will have a few things written about our project so that you can get a general gist of what's been cooking up!

Sonic Galactic is a 2D Fan-game inspired by the Classics. Taking a more "Saturn" approach with its art direction, Galactic aims to be a sort of continuation to where the classics left off. Aiming to follow the classics, Galactic features new zones, brand new sprites, and a new character! This energetic mole is more than willing to join the team in their battle against Dr. Eggman!

This has been a fangame under the works for about 3 years, and is currently using Hatch Game Engine, an engine built from the ground up with accuracy perfectly replicating the classics.

The group assembles! These 5 are the ones responsible for putting an end to Eggman's plans this time around.


Sonic the Hedgehog: The blue blur filled with attitude, Sonic's always itching to embark on a new venture! With the prolonged absence of Dr. Eggman after their last battle, he starts to gain a false sense of security during his vacation, little does he know of what was to come...

Miles "Tails" Prower: Sonic's closest ally and most trusted friend, this curious fox is always willing to follow alongside Sonic in his adventures! After scanning the badniks that disturbed their vacation, Tails (alongside Sonic) make haste for their source location, Dr. Eggman!

Knuckles the Echidna: The steadfast protector of Angel Island and the Master Emerald. Knuckles quickly caught on to Dr. Eggman's resurfacing with the badniks that attacked Angel Island. None of them coming to target the Master Emerald raised Knuckles' suspicion well enough. Understanding what this meant, Knuckles meets up with Sonic and co. to take Dr. Eggman down for good.

Fang the Sniper: This cunning weasel always has a plan to make himself a bountiful profit (most of them to his detriment...). Fang didn't take too kindly to being abandoned in the Atomic Destroyer by Dr. Eggman, so he's teamed up with Sonic and co. to take him down... for purely selfish reasons and rewards, of course!

Tunnel the Mole: This excitable young mole is adventurous and always up for a challenge! After noticing the abnormalities of Illusion Island caused by Dr. Eggman, Tunnel makes the decision himself to follow Sonic and co.'s trail after deciphering they're to be trusted to get to the bottom of what's going on! 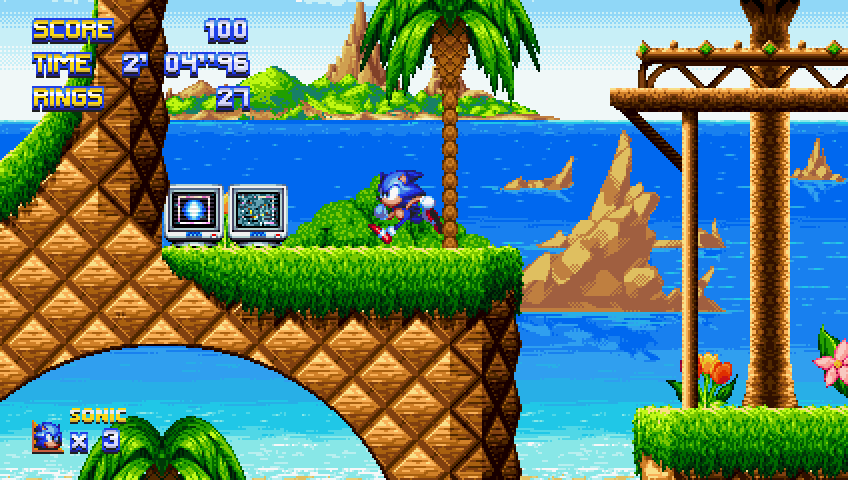 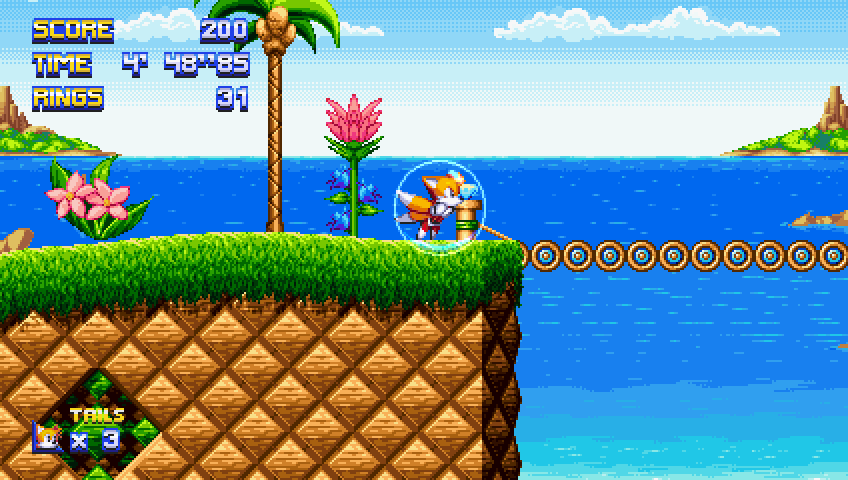 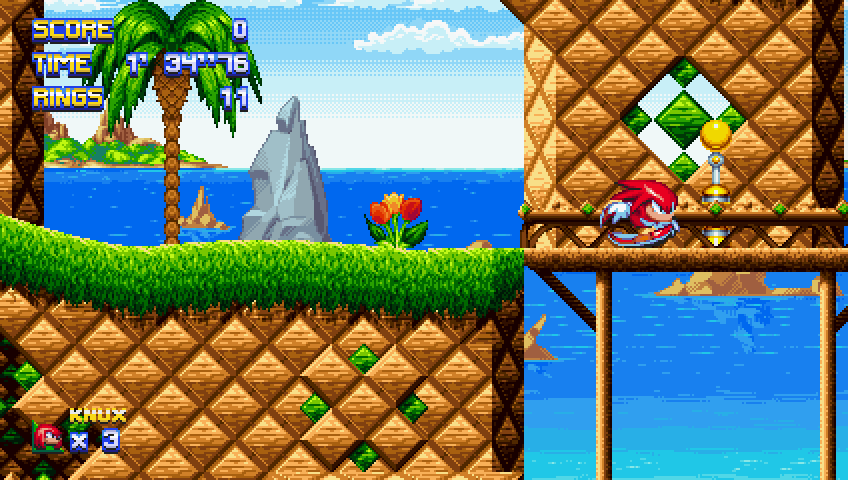 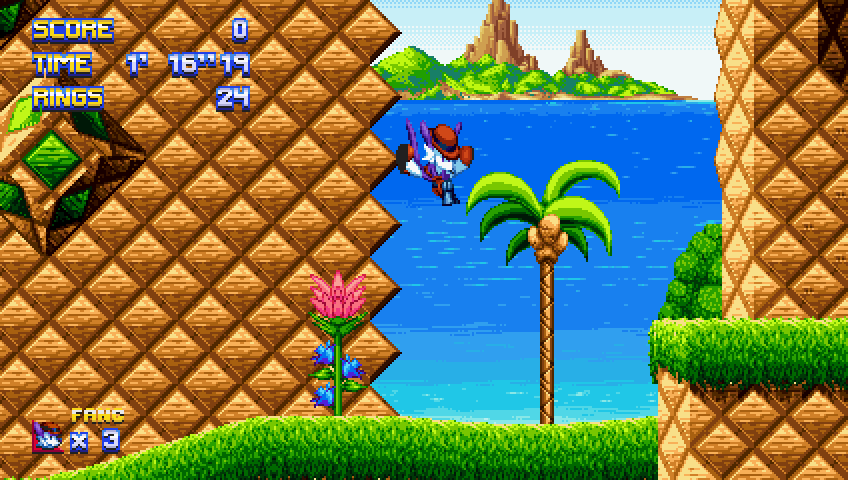 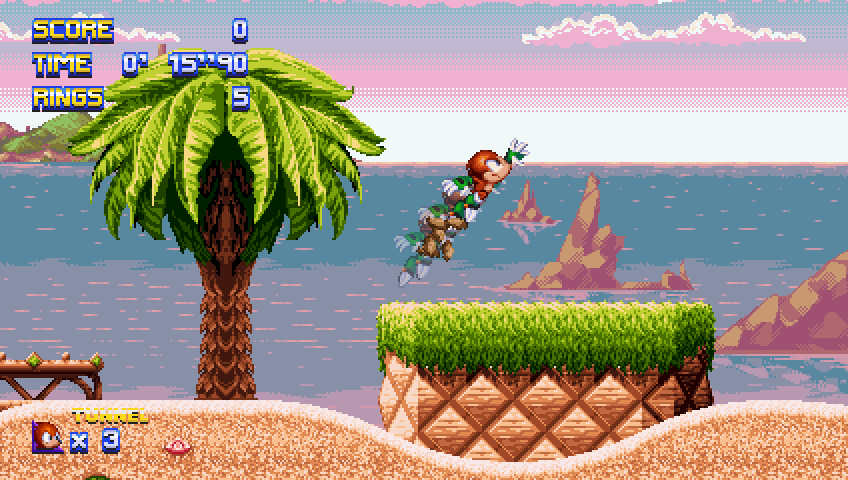 If you'd like to keep up with Galactic's progress, you can find us through Twitter! Here's our handle:

So I was told my cousin was working on this game and that demo of it was out and that I should play it and give some feed back so that's what I'm here for. I'm not trying to complain about anything since it is just a demo so things can be changed this is just supposed to help make the game the best it can be. I also tested the game multiple times to make sure what I'm saying is correct.

1. I feel like Sonic should be faster as he is now he is the worst character to choose as every other character is just as fast as sonic yet they all have abilities on top of being just as fast as Sonic which considering the game is named after him is not good.

2. There is a bug in the game where if you die and respawn at a checkpoint the timer get's reset to zero instead of continuing where you left off.

3. Tunnel (Dig the mole) is a bit broken with him being able to tunnel into into both the ceiling and the walls. It breaks a lot of the platforming as you can just tunnel and jump up insane heights skipping the platforming entirely making him an easy pick for best character.

4. The bosses are pitifully easy. The worm takes about 3 hits before he scampers towards you but you can just roll at him and finish him off before he even reaches the other side of the screen and I once was only able to hit him twice but then I just pass straight through him as he reaches the other side of the screen. Eggman is just a joke with you being able to attack him both while he is one the ground and in the air. Perhaps it be a good idea to only be able to hit him when he is in the air and having to dodge him while he is recharging on the ground to make him more challenging but still have him feel like a first boss.

The rest of the game however is made really well. The art gives the same feeling mania did and the animations are extremely clean but tunnel can sticks out a bit when looking at every character side by side but maybe that's just me. The platforming is also done well but makes Sonic feel even worse when playing other character. The music is definitely one of my favorites but I get the impression they loop to quickly and it can get annoying if you want to explore the level a bit longer also.

I hope this helps and the rest of the game will be just as fun as the demo was to play. (why does the options menu not work tho.)
This game was very fun, I love all the playable characters and how they play differently, the level design, the gameplay, the art. This is a really good fangame and I cant wait for more. ^w^
Reactions: Jlook
H
Huntertheheghog123
How do I download the game
Overall, nigh-perfect, just with a few glitches here and there, like on slopes and things like that. There was also a game-crashing bug that happened when I paused on the first screen of act two.

But one last nit-pick: Tunnel's brown color kind of stands out due to him having the only reasonable shade in the cast. Might I suggest swapping the green and the brown in his design to make him look more like a real-deal Sonic character?

Pyra's Wolf
i think it might be better
Read more…

Is there controller support at all? Trying to use a PS4 and X-Box 360 pad and not really have any joy with them.

Demon Dethchase said:
Is there controller support at all? Trying to use a PS4 and X-Box 360 pad and not really have any joy with them.
Click to expand...

I think you can use things like "Joy To Key" to use controllers
I'm actually pretty impressed with how fun it is to play as Tunnel. The burrow/high jump combo works really well, and it's pretty great when you manage to stick into the ceiling.
no full screen support?

Slasher The Echidna said:
I think you can use things like "Joy To Key" to use controllers
Click to expand...

I managed to get the 360 pad going. I did try joy to key for the Dual Shock but for some reason it didn't like the D-Pad

Press F4 buddy, that'll get you in full screen
Is there an option to play as Sonic and Tails together?
To those experiencing controller issues with the dualshock 4,I would suggest using DS4 windows.Using DS4 there will be a setting called hide DS4 controller.By doing so it will make windows recognize it as a xbox controller and that'll hopefully fix the problem.

This one is, by far, one of the fangames with the most incredible art design of the last decades. And I don't say this as an exaggeration, it is extremely ambitious, I think the sprites of the characters are exactly what I would expect from a game that comes after S3&K! Add a fun level design to this and we have here one of the most impressive projects I have ever had the chance to play!

The only thing that makes me worry is precisely the fact that it is so amazing - projects that are so impressive don't usually have a long life and rarely reach its final stage. Obviously, I'm rooting for everyone's success! Congratulations indeed, because what you have done here is surprisingly high quality!

Demon Dethchase said:
Is there controller support at all? Trying to use a PS4 and X-Box 360 pad and not really have any joy with them.
Click to expand...

Partially, it's unfortunately a bit buggy
One of the best that this SAGE has left us, very creative both in level design and the color of both acts, also, I love the aesthetics it has, highly recommended.

Polymath said:
Is there an option to play as Sonic and Tails together?
Click to expand...

Sadly not for now, it was too buggy.
Just one curious question, what is a .hatch game data file and how do i open them? I know the data for the game is inside and is fun to play with, but it seems that i can't get them to open with any program. Is there another way to open .hatch game files?
This is one of the best so far, just beatiful! Amazing job!
Hey, this seems pretty good so far. The level art is very... noisy, I guess? The details are neat but the basic textures less so. But I can live with it. It's very ambitious to try to draw this much stuff yourself, and the constantly changing backgrounds are a nice touch. As for gameplay, it's never easy to say much about green+orange starting zones because they're all very similar, but this differentiates itself from the pack a little with those green rubber bands and the things that demolish bridges, so that's a good sign. There's a good amount of path splitting and spring use and so on, well done.

DatDataMinin' Guy said:
Just one curious question, what is a .hatch game data file and how do i open them? I know the data for the game is inside and is fun to play with, but it seems that i can't get them to open with any program. Is there another way to open .hatch game files?
Click to expand...

That is our engine's own files, and we honestly did lock them to avoid the fun playing lmao, very sorry about that.
*clap* one of the best fangames i have ever played.

Imperfect said:
*clap* one of the best fangames i have ever played.

That unfortunately won't be real for a while lol, but I'm really glad you enjoyed the demo so far!
Truly an outstanding demo! Feels as official and authentic as Mania. Tunnel feels fantastic to play as, and blends into the cast perfectly. I hope that SEGA notices this game, but either way I hope we see a finished version one day. Excellent music, excellent intro level that manages to not be just Green Hill Zone again, and an exciting new character. Thank you!

(If you wanted to just release a game about Tunnel and treat it as its own IP I'd be your first buy)
Well... This fangame is amazing! everything is so vibrant and amazing! the only problem is a bug i found, when as fang, use the popgun at the ring box, it will destroy it, but do it again. Yep, you gain another box. But other than that this game is amazing! Bug:
You must log in or register to reply here.