Welcome to Bun n' gun! The game that stars a rabbit who has a gun!

For SAGE we have a 1 level demo representing the first level of the game, switch weapons elements, fire type, collect chips and discover alternate paths and secrets.

Think you have what it takes to fight the giant snake that's been terrorizing the town?

Everything you see here is in early development so don't expect this to look the same if we turn this into a full game. 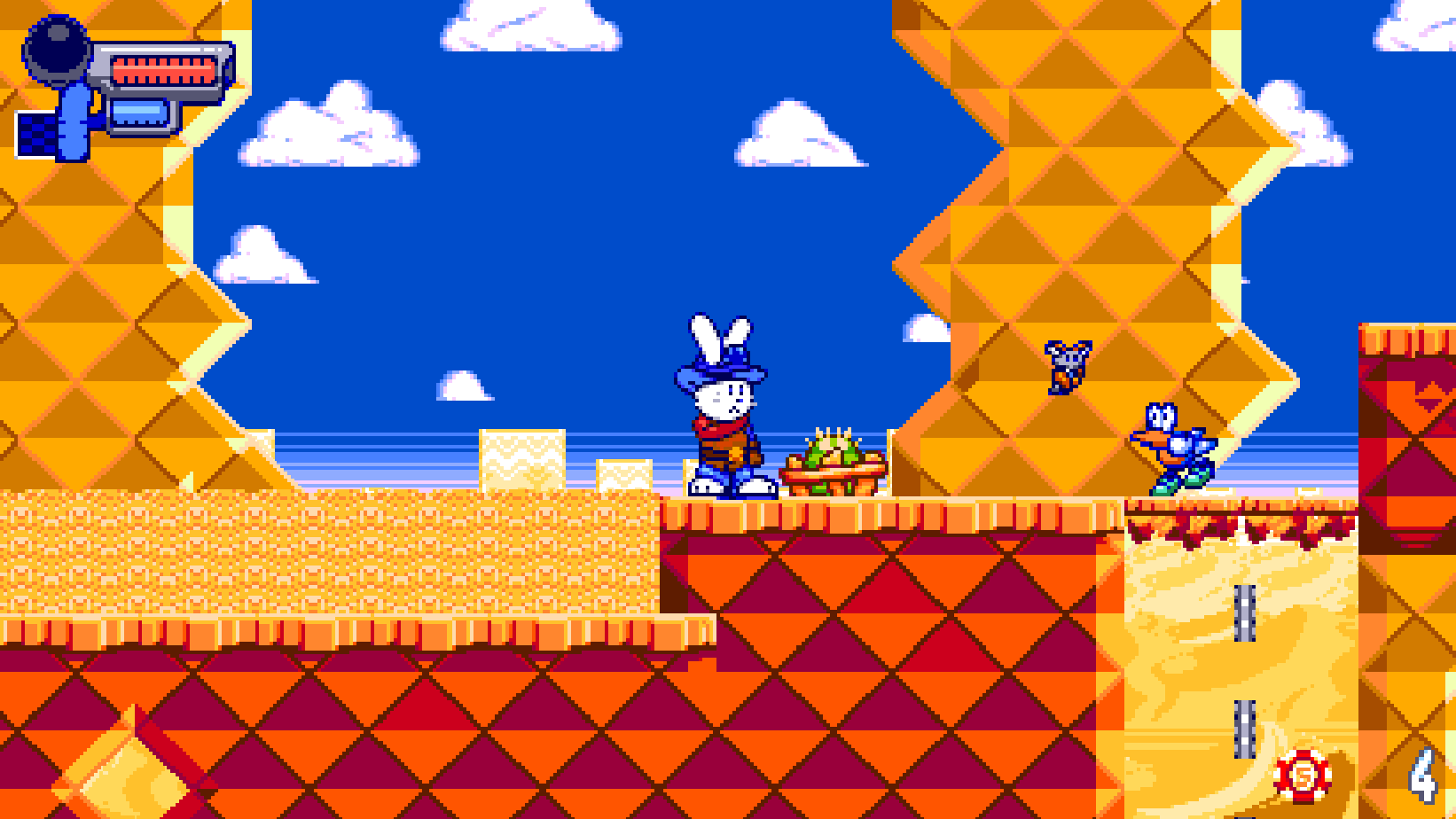 There are so many good things about this project I have no idea where to begin. I love the humor used at the beginning of the game. The one playable stage brings to mind that one cut desert stage from Sonic 2 and I think it is a great setting. One of the things that really wowed me was that despite the fact that this is a 2d platformer, you are not afraid to use different perspectives, as with the boss fight. Another thing I really loved was how the view tended to widen and tighten depending on your location. This will be project I will play again after SAGE.
A solid run and gun game, even though it was only one level. Pixelart is colorful and pleasing to look at. I love the variety in types of shots, you can really get creative with them. If there's one recommendation I could give, add a lock button, I see that you can fire in different directions but it's really difficult to aim without one so adding one would be appreciated.
Read more…

Controls wise, it's pretty normal. I was using keyboard though, and would have to manually check where my fingers are to hit Q/E if I wanted to switch weapons. I mostly stuck to the default cause of it.

The jumping took a while to get used to due to the start up animation, so I felt kinda sluggish. It led to me missing a number of jumps, having to pre-plan basic movements, and getting hit by the boss during it's rushing forward attack.

There's some interesting physics. It took a while getting used to the ring grabbing, a lot of times I would overshoot or undershoot and because of the positioning I would be pulled towards an unintended direction. That said it is nice when it pays off, and I'd love to see some more spots that make use of it (like, having multiple paths you could reach based off of it, or a section where you're climbing up by grabbing multiples of them in a row. That'd be better for future levels).

I liked bumping into a wall, turning into a ball, and being able to jump again. It'd be fun to have more spots where I can explore like that. For example, the cliff in the upper area of the level, near the end before you drop down to fight the boss. I got close to the top but couldn't reach that, and it'd be a cool spot to place a power up or some extra health (is there health pick ups in this game?)

On level design, it has a good snaking pattern to it's structure. I feel like it'd be fun to have more fake/destrucible walls, like in the lower area the camera pans out far enough, I think you guys could make a gap inside the cliffs with some poker chips or power up, so I would know to destroy some blocks to reach it.

There's a couple of sections that leads to poker chips that then loop back into an earlier part of the area (the top of the cliffs at the start, the middle lower area with some sinking sand pits); I feel like these might as well have been blocked off, or had something like a spring to launch you back as a ball.

The presentation is really good. Color palette is pleasant and warm, and everything is pretty legible. I have bad eyesight so that's important to me. The only exception would be when the camera panned out and I couldn't see some stuff like the breakable blocks well. I think the breakable blocks should have some kind of reaction to being shot, like shaking, blinking, making a noise, particles, etc. Some of the game state transitions are a bit imperfect, like dying or going from intro to the level.

The extra bullets on the power up feels good. For the alternate bullet types, are you planning to have them all available, found in levels, bought, etc? If you can have multiple types with you I think it'd be interesting a power up would only apply to one of them, then I'd have a good reason to find multiple power ups so I can pick which ammo gets upgraded. Speaking of power up ideas, one for extending your ammo count would be cool. I see there's one for charging, though it felt like my bullets should have been doing more damage to the boss. Overall I think the gun and powerup system has a lot of potential and hiding that in the levels would continue to improve the experience.

The boss is cute and while not overwhelming, I think some more telegraphing would have helped. I can see there's some dirt particles but I'd consider exaggerating them, especially on the spot where it's about to pop out. For where it drops down, I'd have it hang in the air a bit to be aware of where it's coming from cause I could never dodge that in time. The background to foreground attack was cool.
I played this on my stream. I also watched Stealth play it on his stream.

I really enjoy this game! The controls take some getting-used-to, but once you do they're quite precise and satisfying. My only gripe is the startup for the jump. Otherwise, running and gunning (or is it bunning and gunning) feels great.
This game was pretty dissapointing...

No jump control? No Kayote Time?

It just doesn't control well for me.

BUT I do wanna add that the game is very creative and that the art style is incredible!
Keep up the good work, dude! Even if it doesn't control too well, it does look very promising.

No jump control? No Kayote Time?

It just doesn't control well for me.

BUT I do wanna add that the game is very creative and that the art style is incredible!
Keep up the good work, dude! Even if it doesn't control too well, it does look very promising.
Click to expand...

I'm sorry it didn't meet your expectations, I wanna assure you I'll be addressing these issues and hopefully making it more enjoyable by the next demo, I hope it'll be more enjoyable by then.
I'd strongly recommend allowing people to configure their own controls. I never discovered it was possible to change weapons, because that wasn't a part of my keyboard I tried when looking for the jump and fire keys. Even after I found them, movement always felt a bit awkward, and I'm not really sure why the camera zoomed out at one point toward the bottom of the map. The enemy designs were probably the standout part of this demo, plus the interesting element of having the narrator be someone who cares for the main character, rather than some generic detached voice. You've got more colors than Bun & Gun, but not as many levels yet... keep at it, and put your resources to use.
Main problem of this game is character physics. Bun runs like Sonic , but he can kill enemies, destroy walls, et cetera only with his weapon, so I think that he should be a little slower. Boss is interesting, but he takes SO MUCH TIME to deal with. Stage music feels a little off, I think it fits more for dialogues (Also, can you add some sound effects and music for them and for menu. Before stage I thought that game was broken or without sound). But music for boss is great. Waiting for next demo
fun game! the mechanics took a little to fully understand but they're pretty fun to use and the level design is pretty good!keep at it!
You must log in or register to reply here.