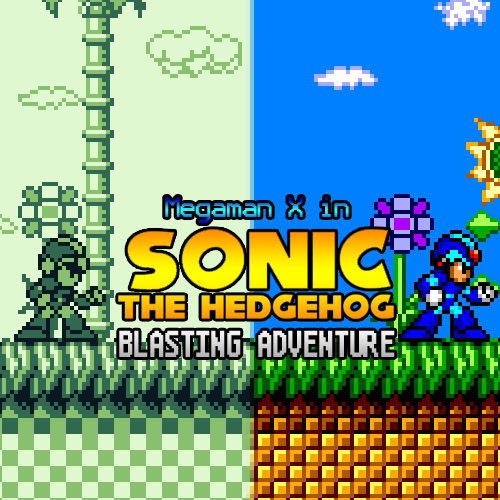 This is a modified version of Sonic the Hedgehog: Blasting Adventure, featuring X and Zero from Megaman X series.
Initially, X was going to be a secret character in the original SBA, but the project was split in two. As the new updates came, Zero eventually became a playable character along with X.
X plays just like in his own games, using his good old X-Buster, dash and wall-kick. Zero's gameplay is based on X3, having two charged shots and a Z-Saber attack.
You can also collect four power-ups to increase your character's abilities:


The package includes JoyToKey, which allows you to play the game with a controller.

I hadn't played the original Blasting Adventure but this seems neat. I wish the controls were rebindable, particularly because pressing Esc instantly exited the game during a late-stage boss instead of bringing up a pause menu as I'd hoped for, but otherwise this is a fine mini adventure with gameplay and graphics just complicated enough to play while distracted by something else.
You must log in or register to reply here.