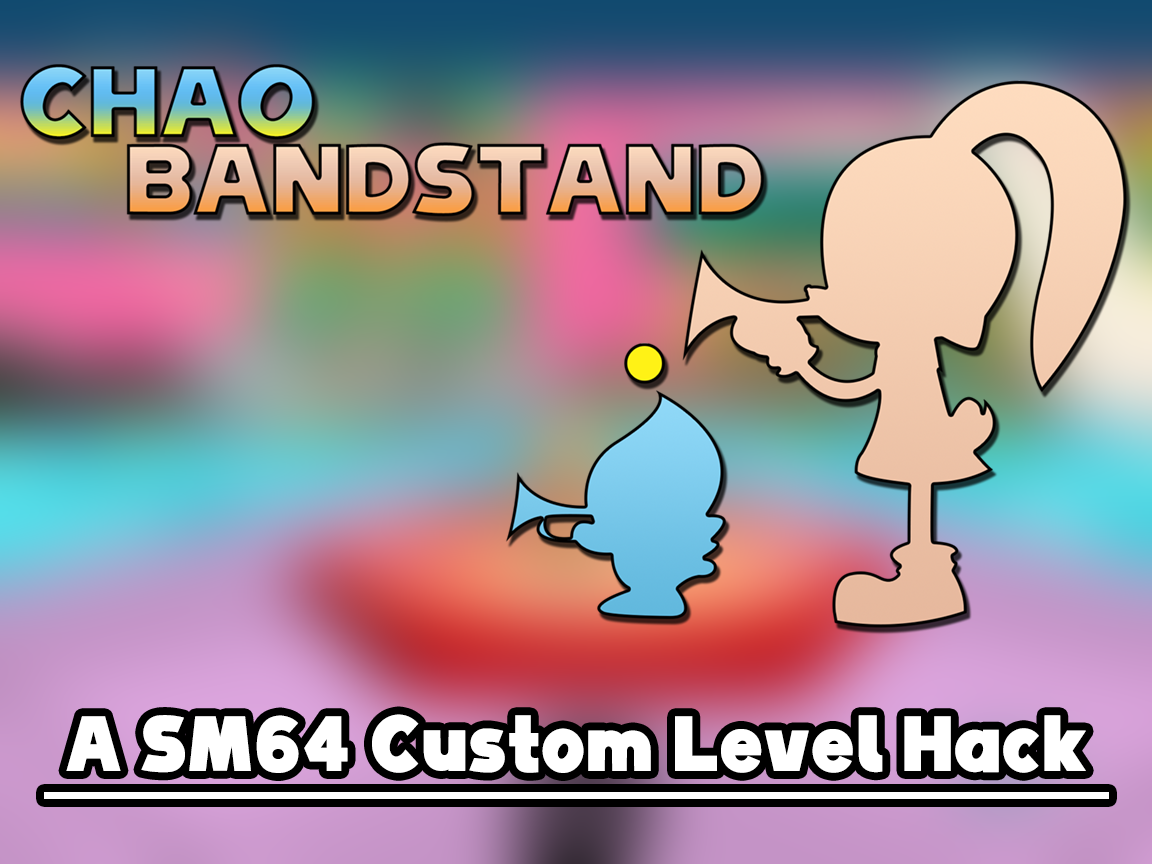 One faithful afternoon, Vanilla was helping the lil' chao prepare a bandstand till suddenly, all the instruments were stolen! The poor chao ever so upset and Vanilla in no shape to find them, asks her daughter to go out and find them. Cream has to explore the aptly themed Music Plant Zone and go find music boxes filled with the instruments galore. Six (or Seven if you wanna go for it) are scattered throughout the zone. Only finding them all will uncover who may have stolen them from the precious chao.

While still sticking to traditional SM64 controls, you have the ability to fly! You'll get about 3 seconds of flight time, with no stamina lost while not moving. You can execute the move through any of the three jumps, the wall kick and/or the long jump. Mess around with it in the hub to get a good feel for it. It's only needed for one spot to complete the hack. It's more of a test run for future uses of the ability in later hacks.

The hack also supports 16:9 thanks to the repo being used. Default is 4:3 but you can change it anytime in the pause menu. Just make sure the emulator window is also setup correctly to take advantage of it.

- Speedrun Mode! Pressing L on file select will bring up a timer. Timer will start as soon as you're loaded into the hub and end when you reach the victory picture.
- Flight mechanics changed just a bit. Camera will no longer jump behind Cream when flying, but still stay at the normal camera position.
-Flying after a long jump is now activated by pressing B rather than A (you still flying by pressing/mashing A though). This lets players use BLJs if they can find the spots for it.
- Updated some models and level geometry to be less intensive, performance should be improved in certain areas.
- Small QoL changes due to updating to the latest version of HackerSM64.
- Added new alt: Creamocchia (by MSP169)
- Added some extra death planes along the slide so you're not waiting to hit the bottom death plane.
- (still wip) Console compatibility. The game itself will boot just fine and play, but talking to the piano NPC (whether it just be normal talking or giving them back the lil' piano) will crash the game, making getting the second star impossible. This is just a real hardware problem and will not affect anyone playing through PJ64 or Retroarch.

- 5 extra alts are now available! Follow the instructions in-game to choose your bunny.
- Fixed the door! Will block you till you have the right amount needed to open it.
- Added two new music tracks which replaces two existing tracks. Music credits are properly updated to reflect this.
- Fixed some NPCs not showing up in the end.
- A bonus area has been added.

- Made changes to the red ring slide:
Falling off the stage respawns you back at the top. Your red rings collected stay with you.
Added heart to heal any kind of damage you somehow take during the slide mainly due to if you DO somehow die, you end up in an infinite deathloop when you respawn.

This was a lot of fun! I can tell a lot of heart and soul went into this, and I really hope to see more from you down the line.
Reactions: Gamebun

Gamebun
Thank you! And I hope so too personally. Just need to get back into gear.
Read more…

Made an account just to say this was really great! I had a lot of fun and there was a lot more polish than I was expecting. Hope to see more fun stuff from you in the future.
When I try to build with sm64pcbuilder2 I get an error for every animation

Micah33088 said:
When I try to build with sm64pcbuilder2 I get an error for every animation
Click to expand...

Did you remember to uncheck DynOS in the patches tab before compiling? That has conflict issues with the included extended_boundaries patch files in the zip.

Gamebun said:
Did you remember to uncheck DynOS in the patches tab before compiling? That has conflict issues with the included extended_boundaries patch files in the zip.
Click to expand...

Yes. I don't know why I got those errors because I tried to compile it again with the same settings and it worked fine

Micah33088 said:
Yes. I don't know why I got those errors because I tried to compile it again with the same settings and it worked fine
Click to expand...

PC Build be weird like that. Glad you got it working though!
I can't run the game on the Project64 emulator, even if I set the memory size to 8MB.

FunsterTime said:
I can't run the game on the Project64 emulator, even if I set the memory size to 8MB.
Click to expand...

There's a known bug with PJ64 v2.3 that just has issues with certain sm64 hacks. Are you using that by any chance? Try something like v2.4 or even an older version like 1.6 and see if that works. If not, what's the error you're getting?
I was using PJ64 v2.3. I used the newest version v3 and it worked perfectly! Thank you for telling me.
how i can install this mod on sm64pcbuilder2
You must log in or register to reply here.