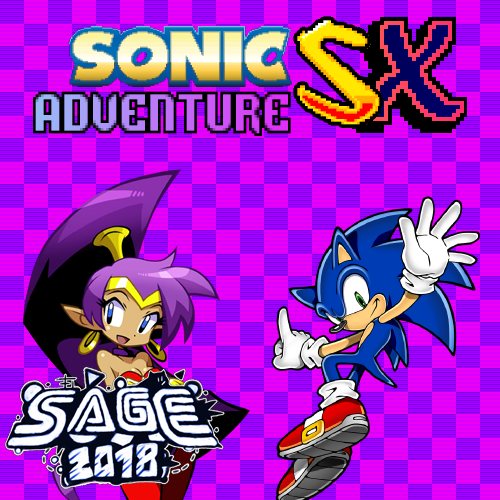 Sonic Adventure SX is a 2D Sonic the Hedgehog fangame, crossed over with the Shantae series. Originally named Sonic and Shantae Adventure, it has been in development for over 18 months and has received four major updates, and will also have a Flash Movie counterpart in the future. This is the special SAGE 2018 Demo which includes 8 characters, super forms, 4 stages, 2 minigames, a rank system, and one ultimate adventure!

While I applaud the effort, there's just not a lot of good things to say about this game. The most fun I had was playing as Sonic, and even then his levels were very linear and sometimes even confusing. The levels for the Shantae cast are riddled with bugs and in general have very bland and boring level design, not to mention half the time the sprites don't even align properly with the ground they're supposed to be walking on. The camera desperately needs tweaking as well, as it was constantly jittering back and forth and couldn't really handle Sonic's speed/quick turns. I realize I may be being a bit harsh but I do see some potential for a fun game here, so hopefully you can keep working on it and make it a smoother, more concise, experience. Good luck

giga6152
Thank you for your feedback. However I have now decided to cancel this game and work on something better. I will try my best to address everything wrong with this game and make it better. Stay tuned for that xD
Read more…

iv'e seen youtube videos of this
it isn't bad
You must log in or register to reply here.