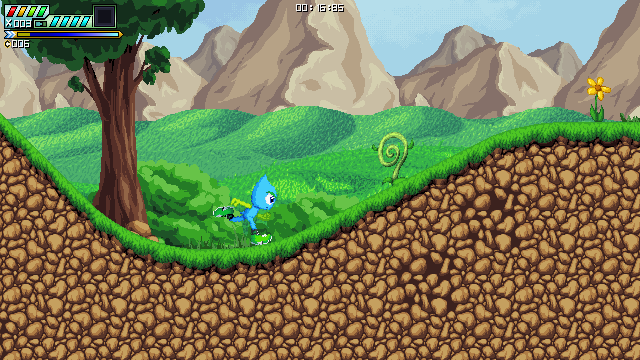 Bingo The Multiva is a fast paced exploration platformer about the titular young multiva, Bingo, on his journey to stop the evil Darth and his troops from invading his homeland. Bingo will have to conquer many challenges, defeat many robots, and explore many exotic locations, by utilizing his various abilities.

He can perform a Kickflip or Spin Attack to take care of airborne robots. He can Roll into enemies on the ground or to gain extra speed down hills. His Butt-Bounce allows him to get back to the air while achieving a greater height. Bingo is also able to utilize his Dash ability when he needs to keep things moving.

The game is still a work in progress! There were some planned features for the SAGE 2017 demo, but they could not be added due to time constraints.

One of the major changes that I wanted to have ready for the demo is Bingo's new redesign. His sprites are also being redone in a new style that better reflects the direction I want to go with the game. Here are some examples of the sprites.

Another addition that would have been in the demo are Charges. Charges would serve as the power-ups you can find throughout the level. There were going to be 3 Charges showcased. Speed, Air, and Swim.
-The Speed Charge would increase Bingo's acceleration and allow him to reach his top speed easily.
-The Air Charge makes Bingo's jump floatier and let him stay in the air longer.
-The Swim Charge improves Bingo's underwater mobility as well as staying underwater longer.

The game controls fine, the "attacking" is kinda weird and really slows you down in my opinion. The music is great and the sprite art is good too, it just seems very uninteresting and bland to me. It looks like some random mobile game. The sound effects are meh.
Reactions: MetalVolt
Read more…

LOVE DAT DESIGN!
You must log in or register to reply here.