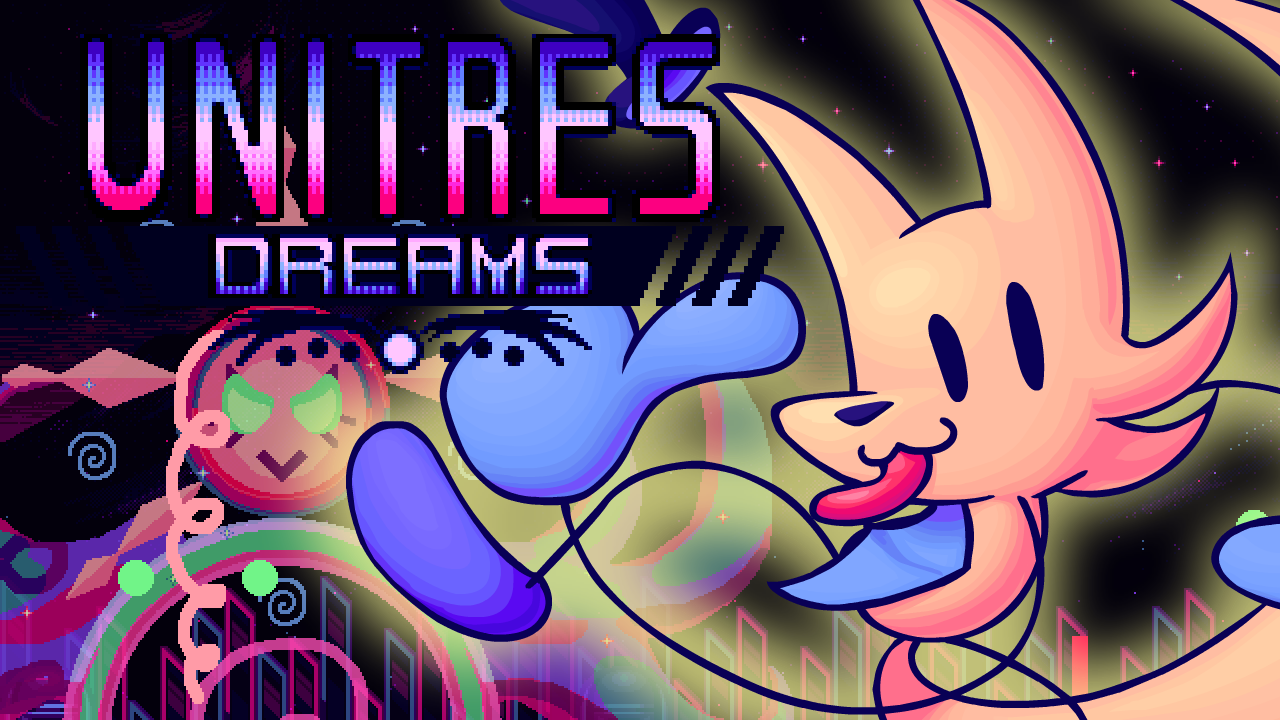 Download for free on Windows, Mac, and Linux. Or get the game on Itch.io!

UNITRES Dreams is a free, experimental pixel 2D platformer created by Unlimited Trees with inspirations from games on the Megadrive/Mega CD. It involves a group of friends going on a wacky adventure to get home, having to traverse bright, colorful environments in a strange dimension. The game's soundtrack was composed by RRThiel, A-S-H, Scooblee, CosmicGem, Mr.Sauceman, [c], MiniMacro, Crash, littlelamp100, Woofle, Lange, MegaBaZ, SoundCirclet (dante) and R3tronaut. However please note that most of the sound effects and a certain music track do not belong to us.

Originally, the game started life as a tech demo for a future project. This game was made in Construct 2 and is completely free to download. Currently the game is available for Windows, Mac, and Linux.

The game includes 3 separate campaigns with their own levels and story, which include:
-The "Dream Campaign", the main campaign with 4 levels, each split into 2 sections.
-The Original Campaign, which contains the first ever level made for the original tech demo.
-The "ULTRAMEGA Campaign", which contains multiple challenging levels, 2 of which being based off the game "MEGAMAN PERFECT BLUE", a fan project lead by RRThiel.

I hope you enjoy this game I have spent the past year and a half creating. It was definitely a great learning experience for me, and I hope you'll continue to support my work when I begin creating my next big project.

(The current version is v2.0.1. Please let me know any issues you may have with the game)

Okay, this game shows a lot of potential with it's colorful graphics, fluid controls, and bombastic style, but... IT'S TOO MUCH.

I like a lot of variety and setpieces in games, but by the third level it's genuinely overwhelming. There are enemies attacking from all sides, your party is bouncing all over the place, objects are flying around the screen, you don't know where to go, and suddenly you're in a cube shooting bullets.

The crazy style was charming before, but a little bit goes a long way. As admittedly entertaining as it is seeing things flying around, I think you as the developer as well as the players would get a lot less fatigued if things were spread out into a more digestible pace. The first few levels have enough gimmicks to last for three or four different levels, alone.

Dialog exchanges and cutscenes go on for just a little too long. The silly writing is funny in short bursts, but gets a little grating for long exchanges.

As much as I gripe about this game, though, I had fun with it, and I hope to see more.
You must log in or register to reply here.