DISCLAIMER: THIS BUILD DOES NOT REPRESENT THE FINAL VISION FOR THIS GAME


*The intent of this demo is promotional purposes only*


This is not the state I would have liked to release the game in, nor is it representative of the final quality I would like the game to be played in. That being said, recently, the main programmer behind this build, the talented MarmitoTH, decided to amicably leave the development of Sonic Freedom. The idea with releasing this early build is to generate more interest in the project and hopefully welcome a new programmer onto the team. If you're interested in becoming the next programmer for Sonic Freedom, please contact tripplejaz through Twitter (links provided below in credits section) or email your interest, along with experience, at tripplejaz@gmail.com

I'm fully aware of many jarring issues with the current build. Visuals are sparse or cluttered, level design is poor, the camera is not entirely functional the way I'd like it to be, and the Bullet Dash remains a source of debate among those who have played it. Please keep criticisms focused, as many people have shared their thoughts and most have already resonated with me and I agree with. I am hesitant to release the game in this state, but I think it will be to the benefit of the project's future development to do so.

Thank you for understanding and I hope you enjoy the small slightly off-kiltered slice of the game.

The game is built in Unity on MarmitoTH's free to use, open source 2D engine called the Freedom engine, built precisely for this project and released for the public to use. You can find details about it here.

Concept
Bring Sonic into the modern era of 2D platformers with faithful recreation of momentum based gameplay, drawing on mechanical and level design inspiration from recent metroidvania titles like “Hollow Knight” and “Ori and the Blind Forest,” coupled with an aesthetic grounded in 90s anime as seen in the Sonic CD Toei anims and the “Sonic the Hedgehog” OVA.

Sonic wont stop looking down i cant figure out how to fix it even if im not touching the keyboard he is just looking down
this is fixed when i switch to a controller but the up and down axis is backwards so when im pressing up he looks down and vise versa
Last edited: Dec 2, 2020
D
DarthPhoenix306
PLEASE HELP ME

Nicki Manaji
Omg I Love This Game !
Confusing level design, but otherwise incredibly beautiful aesthatic. Excited to see what comes next, hopefully the level design is less vertical and more traditional.
It's a pretty good demo, although I do think this is just scratching the surface of what this gameplay style is capable of. The level design could use some work too. Otherwise, this is an amazing demo.
Overall, 9/10.
Read more…

THANK YOU IVE BEEN WAITING FOR THIS
There is no option to NOT tripple map your controls and all the axis-s are mixed up, so all that this game is is watching sonic headbang. 10/10
It's beautiful. I've been looking at this for five hours now.

On a more serious note, I really like what I'm seeing so far. The hand-drawn design is great and the controls work great. I really hope you can find someone to help finish this out because I'd love to see the final product at some point.

As far as the bullet dash goes, I kind of like it. It's a unique mechanic I've never seen before, and it works well with the level design. I'd honestly hate to try completing the game without it.
cool
This is really awesome, but the stage design is... not. That, and Sonic's acceleration is a bit too low, he feels heavy.
I also got the emerald shard :)

IDK but he feels kinda slippery and maybe too heavy?
Cool
thanks for this cool game) 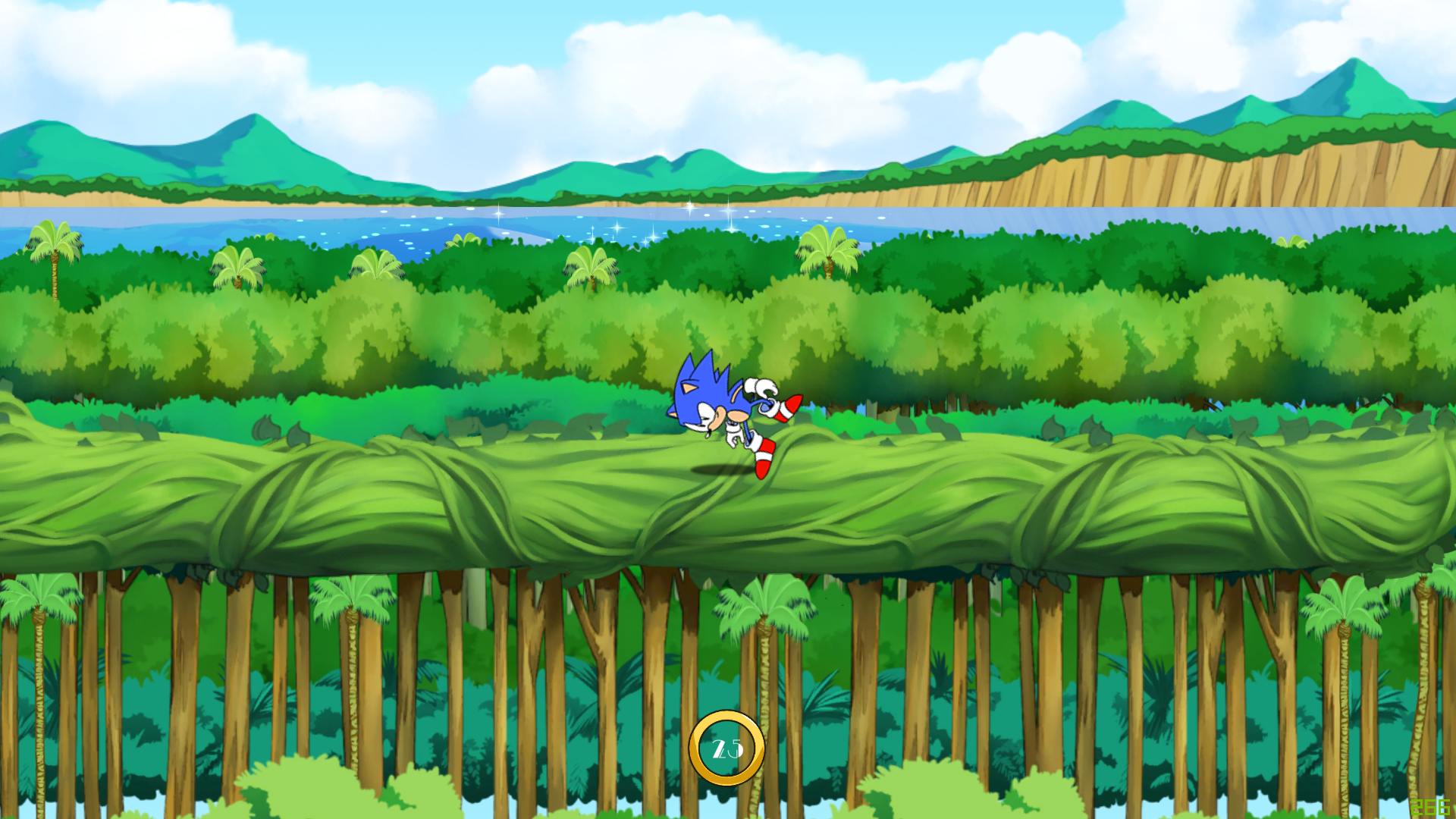 Um I found a glitch idk how I did it.

i think i know, if you end up doing a false double jump (starting the air dash and hit a wall cround or roof makes the air dash cancel) if you do a false double jump on a slope that makes your sprite tilt, the game will bug thinking you shooted yourself on ground, and thaat sprite becames the normal ground sprite,so when you step in one slope, itwilll tilt the same number of frames, while already being tilted, just do a ininterrupted air dash, it will fix the sprite
hey i found this bug when i exactly touched the ground but at the same time gave an air-dash and the collisions bugged,I don't know which part of the map this happened because this map is sooooo big and my sense of location is horrible haha, but other than that the game is perfect continue this incredible game :D 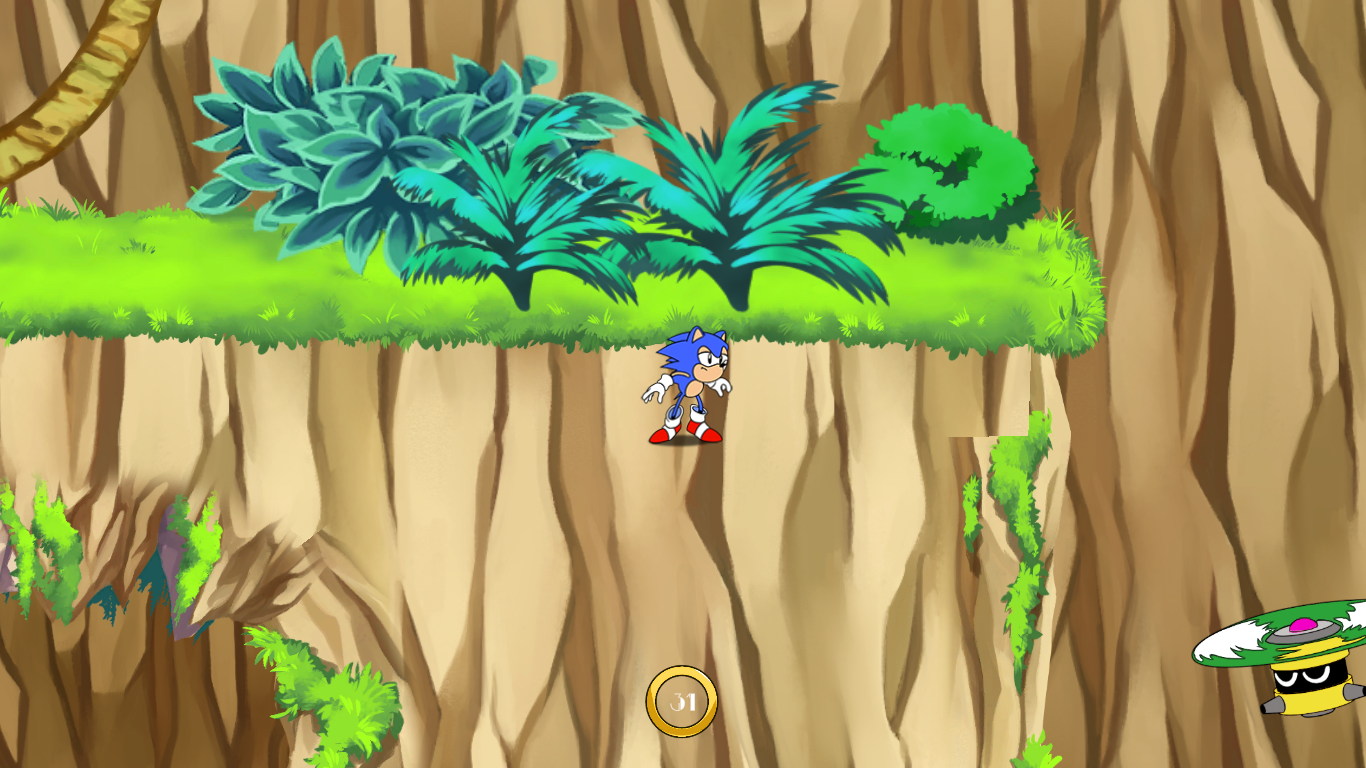 Last edited: Nov 8, 2020
Hey, just a quick note: There's a v-sync issue that makes the background look like it's breaking apart, so can you please fix that? Oh, and it also only happens in fullscreen.
I downloaded this game on my mac and it says permission to open the file. how do i fix this?
How do i Download it for Mac? All i get is a file folder

IttaBitta said:
There is no option to NOT tripple map your controls and all the axis-s are mixed up, so all that this game is is watching sonic headbang. 10/10
Click to expand...

do you know how to fix it?
Sometimes you can just simply jump into the ring tv. But its an awsome game.

Mr__Siphon said:
How do i Download it for Mac? All i get is a file folder
Click to expand...

Pls answer. The MAC download doesn't work for me. If it worked for another MAC user please tell me what you did

Mr__Siphon said:
Pls answer. The MAC download doesn't work for me. If it worked for another MAC user please tell me what you did
Click to expand...

I have an app instead of a folder.....
Well whenever i open the Mac mirror it comes up as a folder file. And the game says its a text document
You must log in or register to reply here.