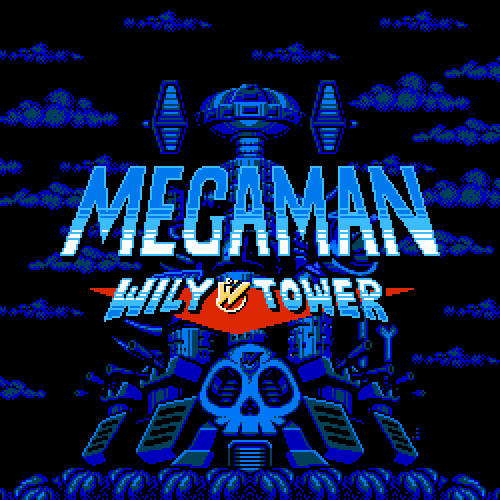 ABOUT​
This is an 8bit-style demake of the Wily Tower bonus game from the collection Mega Man: The Wily Wars. It is a standalone version of the game that does not have Mega Man 1-3 attached. It features 8bit versions of the original game's graphics and music, 1:1 recreations of the 7 original stages, the weapons and utilities of Mega Man 1-3, the Time Slow and Oil Slider weapons from Mega Man: Powered Up, a sound test, and cheat codes. There is also an "Improved" weapon style mode you can select at the start of a game that changes the weapons to be more balanced, and allows every weapon barrier to be destroyed by all of the barrier-breaking weapons. It also has a number of new options such as difficulty, infinite lives, game borders for when you're in fullscreen mode, interpolation and CRT filters, pixel ratio, optional new HUD graphics, among other things. In addition there is secret unlockable content that was not in the original game. The game is completely finished except for the final boss, 8bit recreations of some music tracks and jingles, the Wily Tower-themed fullscreen game border, and more playtesting. It is playable from start to finish, and has credits.

The point of this fangame was to try to put together an entire game on my own as efficiently as possible, learning the ins and outs of everything that goes into game creation, and as a way for me to try to put into practice a healthy and sustainable work ethic for myself as I have trouble taking care of myself. Unfortunately I did not succeed with the latter, and I'm not very proud of this game's development. Regardless I am still proud of the game itself, and I hope you enjoy it. I chose Wily Tower because it's relatively short, and many assets for it already existed in some form. It was essentially a game just waiting for someone to come along and put it all together. As such this game was almost entirely made by me using existing assets that people had already made, such as the 8bit tilesets, the engine, enemies, gimmicks, weapons, etc.. Though of course I still had to make a lot of new things myself such as bosses, menus, and cutscenes, as well as touch up the existing assets. I also needed outside help with other things as well. Shout-out to iyamwhatiyam for helping with the music!

If shaders are not working for you then you probably need to install/update DirectX. If you are using a Windows compatibility layer like Wine you will need DirectX Runtimes for shaders to work. The game is fully playable without shaders though, they're just used for a couple visuals. It's not a big deal if they don't work.

This game is not possible on an actual NES in its current form. I cheated the palette limitations a few times, most notably in Buster Rod G's stage with the 16x16 palette limit, and I'm almost sure I exceeded the tileset size a number of times. There are also some things like the Fire Snakey boss that would have to be heavily changed to make truly NES accurate, and I felt that it would be better to leave it faithful to the original game instead. I did try to remain faithful in as many places as possible. Maybe one day I'll come back and improve the accuracy.


CHEAT MENU:
On the title screen: Up Up Down Down Left Right Left Right

Please keep adding new weapons from all the MEGAMAN this great I always dreamed of playing a game like that especially fighting with all the boss Robots the best MEGAMAN game I ever played
Well, that was... something, I guess? I played it on Hard Mode and with Improved Weapons Mode, and I can't really say anything. I didn't play Wily Tower in a while, so I can't say if this is how the original game was, but this felt... really unmemorable. I just went through it and I can't really remember much, aside from the first three Wily Tower bosses. The visuals are meh, the level design is meh, the pick weapons before the stage system was interesting, but some weapons were way too nerfed to be viable, such as the magnets from the third game. There were oddly a lot of Hammer Joes in this game, which is a weird design choice.
The Powered Up weapons are rather situational and I didn't really find them useful, but Hyper Bomb was heavily improved.

Overall, this is just sort of... dull and run of the mill? Nothing particularly stood out to me, though I will say that the music did sound better than the original versions, since I decided to give them a listen after beating the game - good job on that. But otherwise, I really can't say much, as there's really nothing to say. It does the most basic things right - it controls correctly, it's not broken, it's not terrible... but I don't really think this was worth beating, either. I do assume that a lot of those problems stem from how the original Wily Tower was, but that didn't really make this one any more fun. The Improved Weapons Mode is a good rebalance, but that's about it.
Reactions: BeRluck325
An incredible recreation of one of my favorite Mega Man games! I played the "rebalanced" mode, and I loved the changes to the weapons. My only quibble is the final Wily fight isn't fully implemented, but as it's marked Beta, I won't hold that against the score. Excellent work!
B
BeRluck325
Very good game add Weapons
Read more…

This was amazing! Thank you so much for making this! I will be doing a short video review within the next couple weeks! Thanks again!
I love this so much. There is so much I love about the re-balance weapons BUT THE CHANGED HARD KNUCKLE IS MY NEW FAVORITE THING RIGHT NOW.
I never played through Willy Tower and this was a blast!!! A BLAST!!!! Thank you so much! Here is my review:
You must log in or register to reply here.