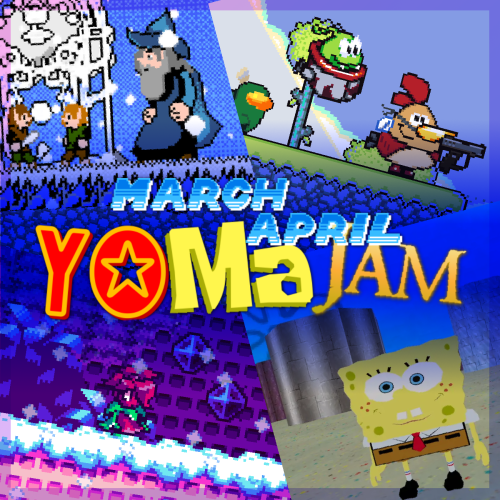 ​
YOMAJAM was an event done in 2021 by me and a few friends. This is the collection of the games featured in the event, with multiple QOL improvements. The idea was that each member would get 3 random games from a list and have to make something inspired by them! This resulted in many wacky and different small adventures.

Keep in mind these are mostly just proof of concepts.

Made by me! Features you play through 2 stages as Pou with the help of your partner from Cut The Rope trying to avenge the crown of Play Store Island!
SERIOUS LORD OF THE RINGS BROS

An HTML5 2D sidescroller adaptation of Lord of the Rings in the NES style, made by @casanovagames. A full game, multiple locations and accurate to the movie.

A bizarre 3D story-driven adventure made by @John-Kun (creator of Flicky8 & Sonic PC Port). A doom mod that has you play through a campaign as Spongebob helping out Sandy in multiple different objectives. A lot of content.

A game by @ZazonGames that mixes Megaman, Jet Set Radio & Sonic.exe. Quite a weird little mix of games.

A game by @SpeedVGM that mixes SMB2, Pizza Tower & Freedom Planet. Quite Early in development, follow him for more updates!
BONUS: COMMANDER NUKE

Added as bonuses to the collection, you can play through Commander Nuke (game made by me and
@casanovagames). This one mixes Duke Nukem and Super Mario Bros).