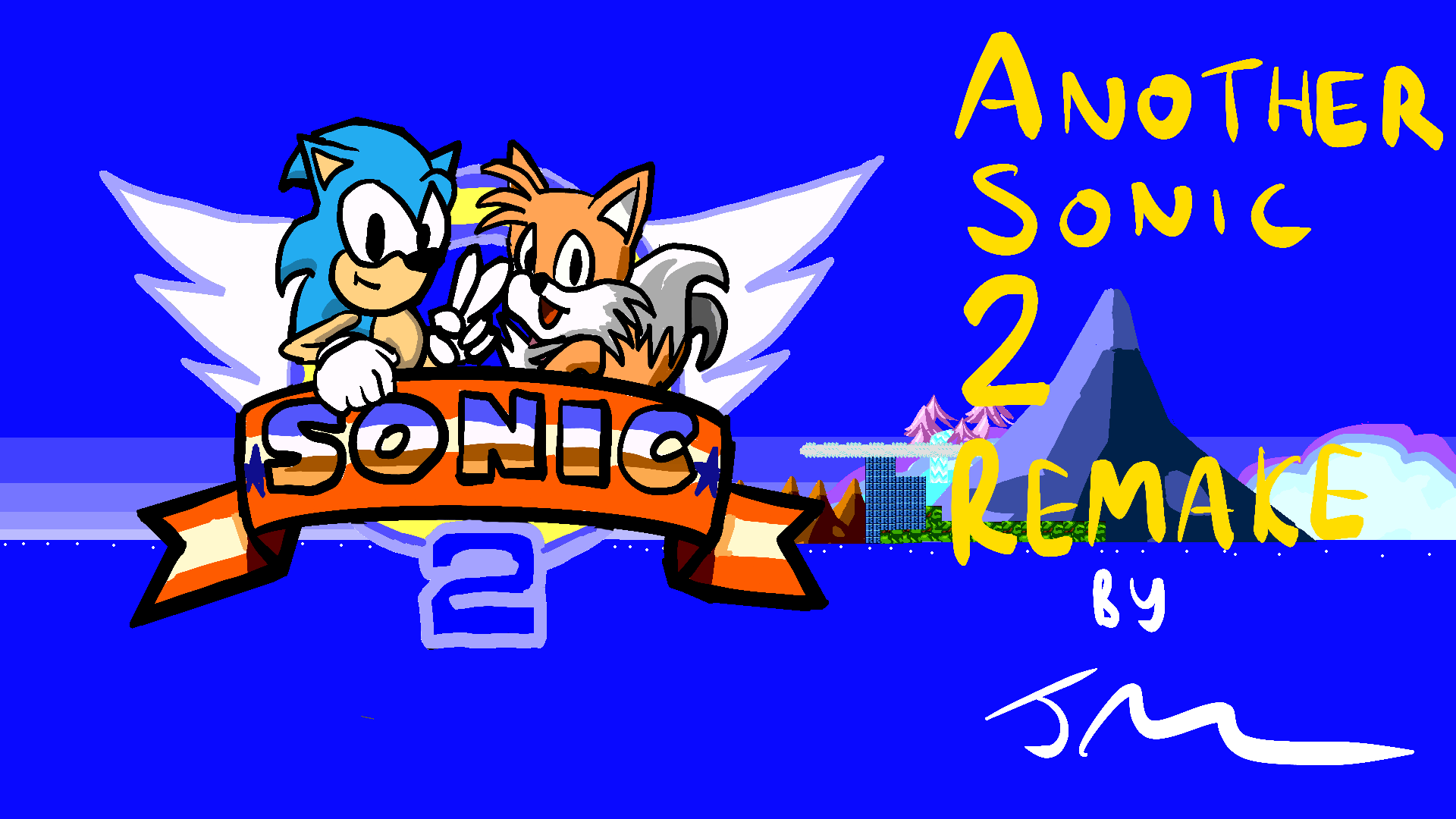 View AS2R's original "High Quality" art here
AS2R has been updated to v2! See updates for more info!​
I am just an average person who grew up with the original Master System version of Sonic 2. I have always loved it's unique style. Since I was a kid I have dreamed of making a Sonic fan game. So I taught myself how to animate, make sprites, and how to script - so I could make that dream come true! 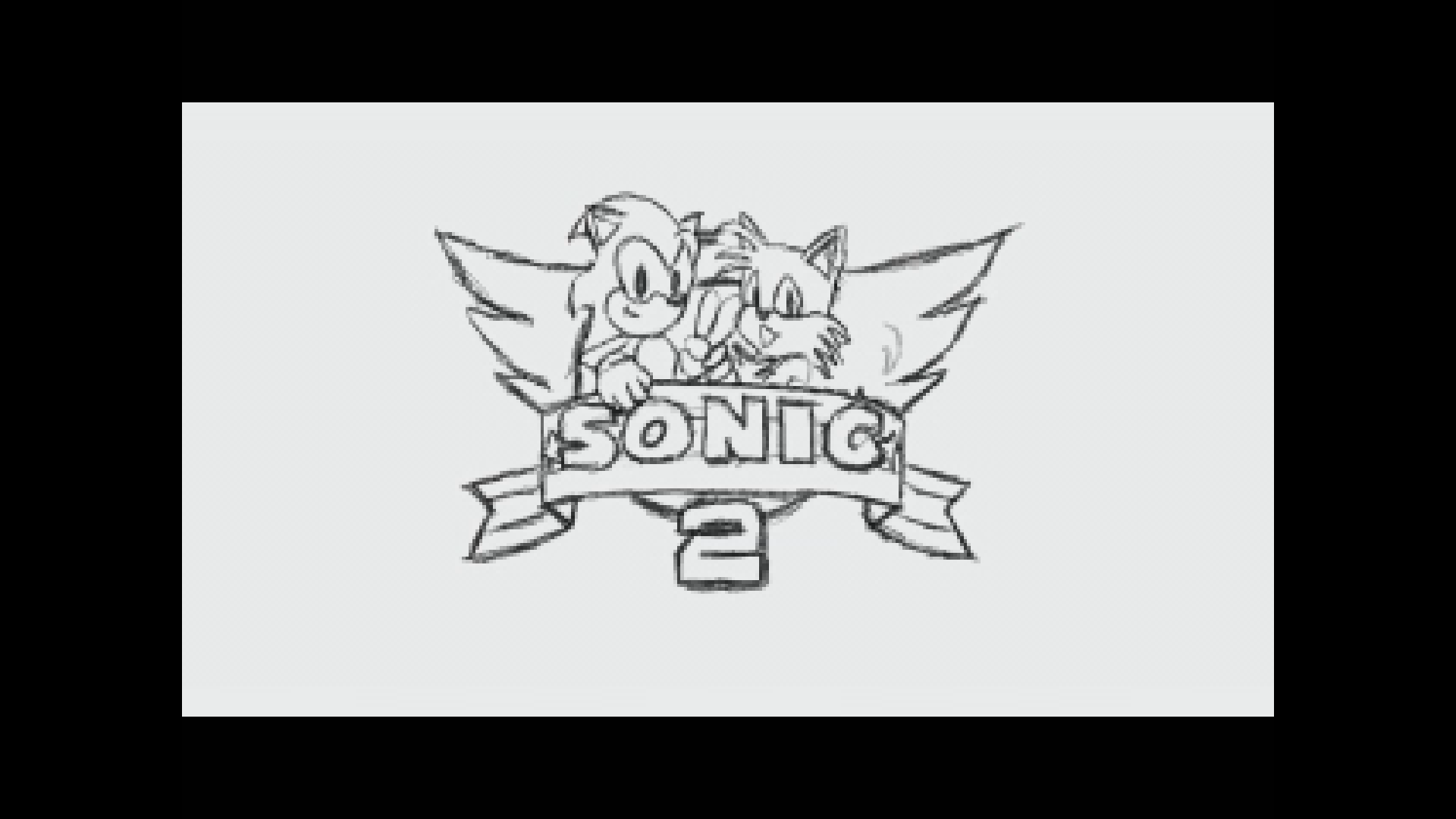 Welcome to Another Sonic 2 Remake! A hand crafted re-imagining of 8 Bit Sonic 2, designed to be a prequel to 16 bit Sonic 2! Inspired by the amazing music, fan games and YouTube content created by the Sonic community and the "digitised" games of the 90's. 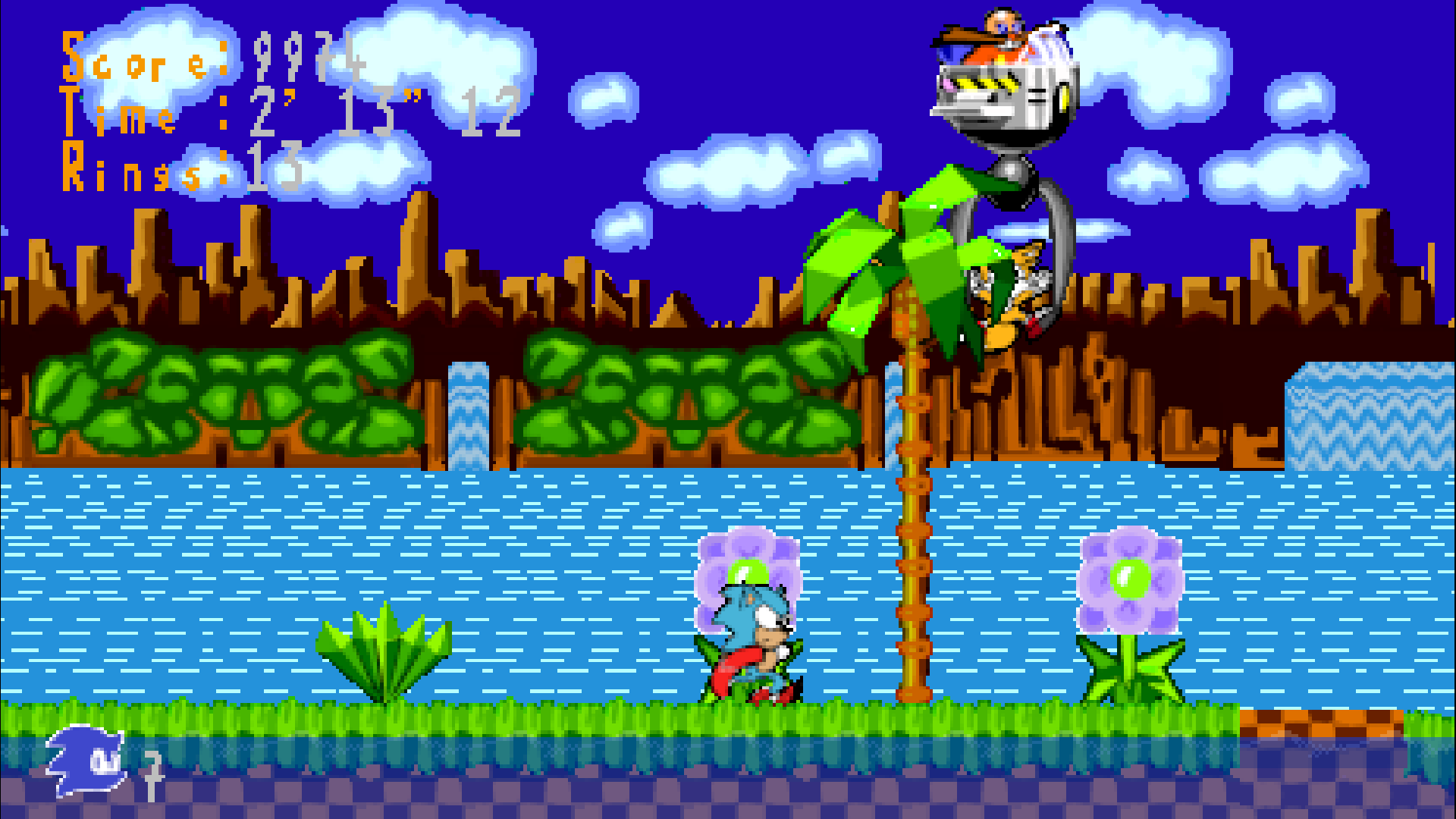 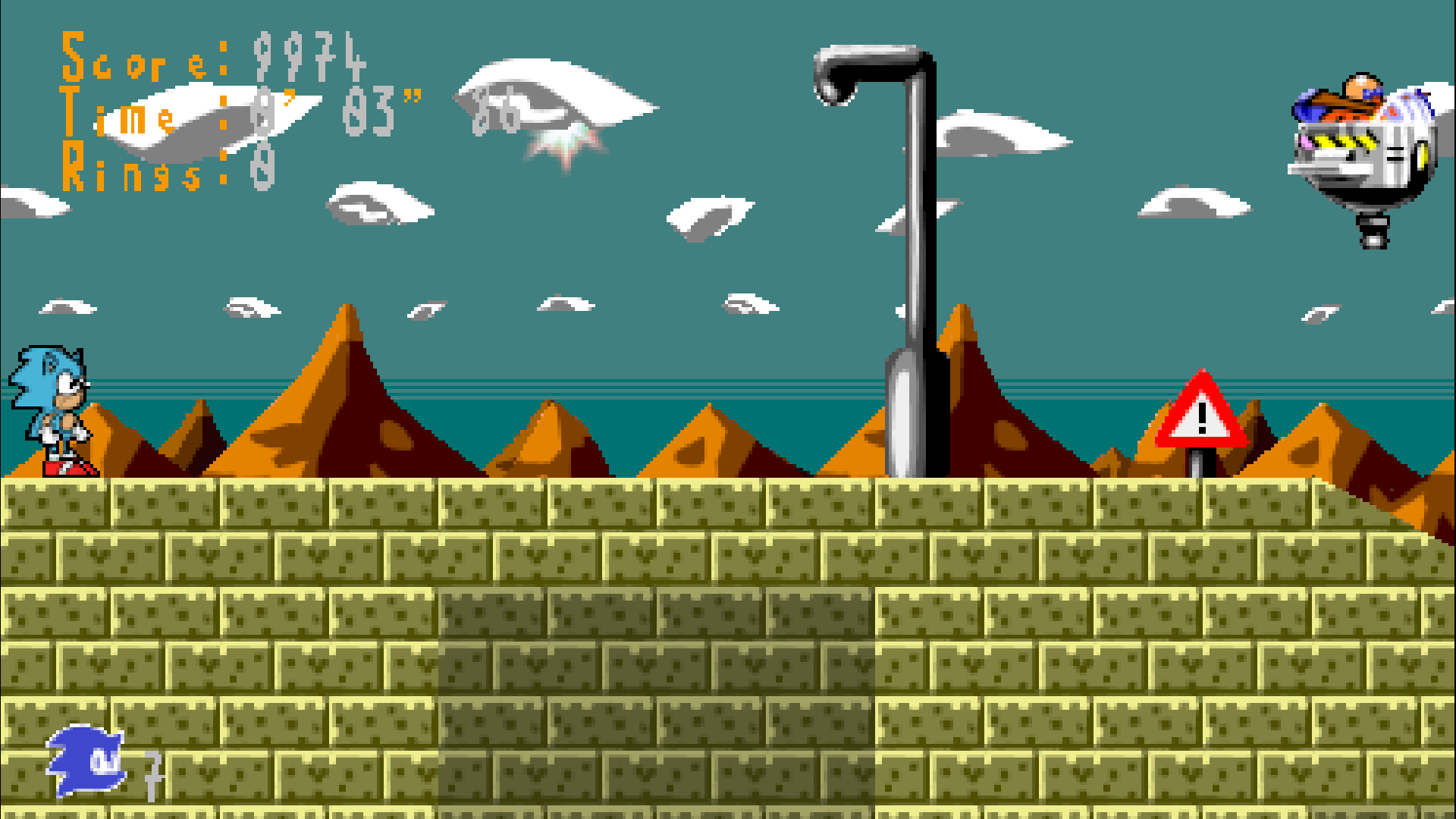 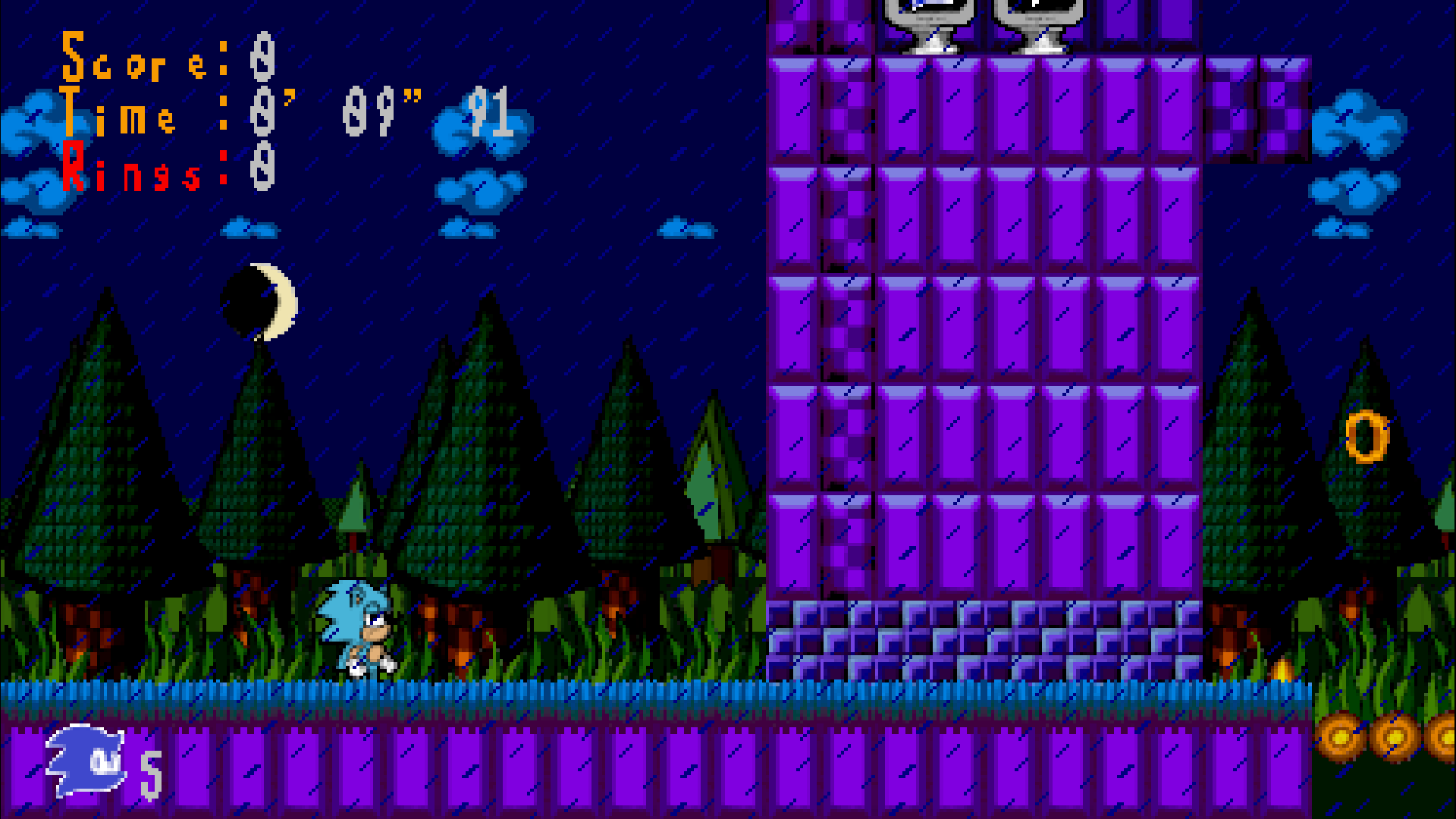 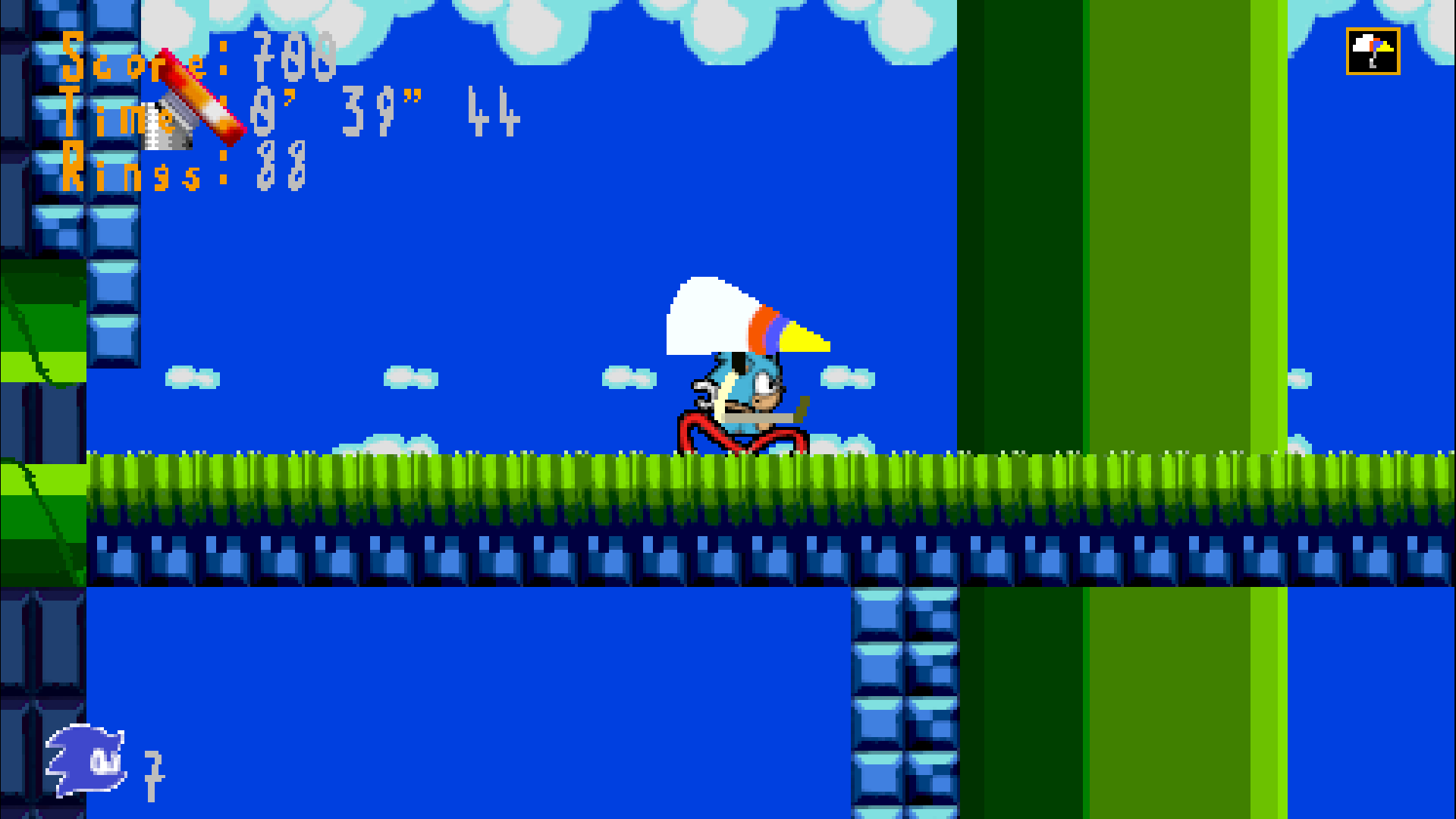 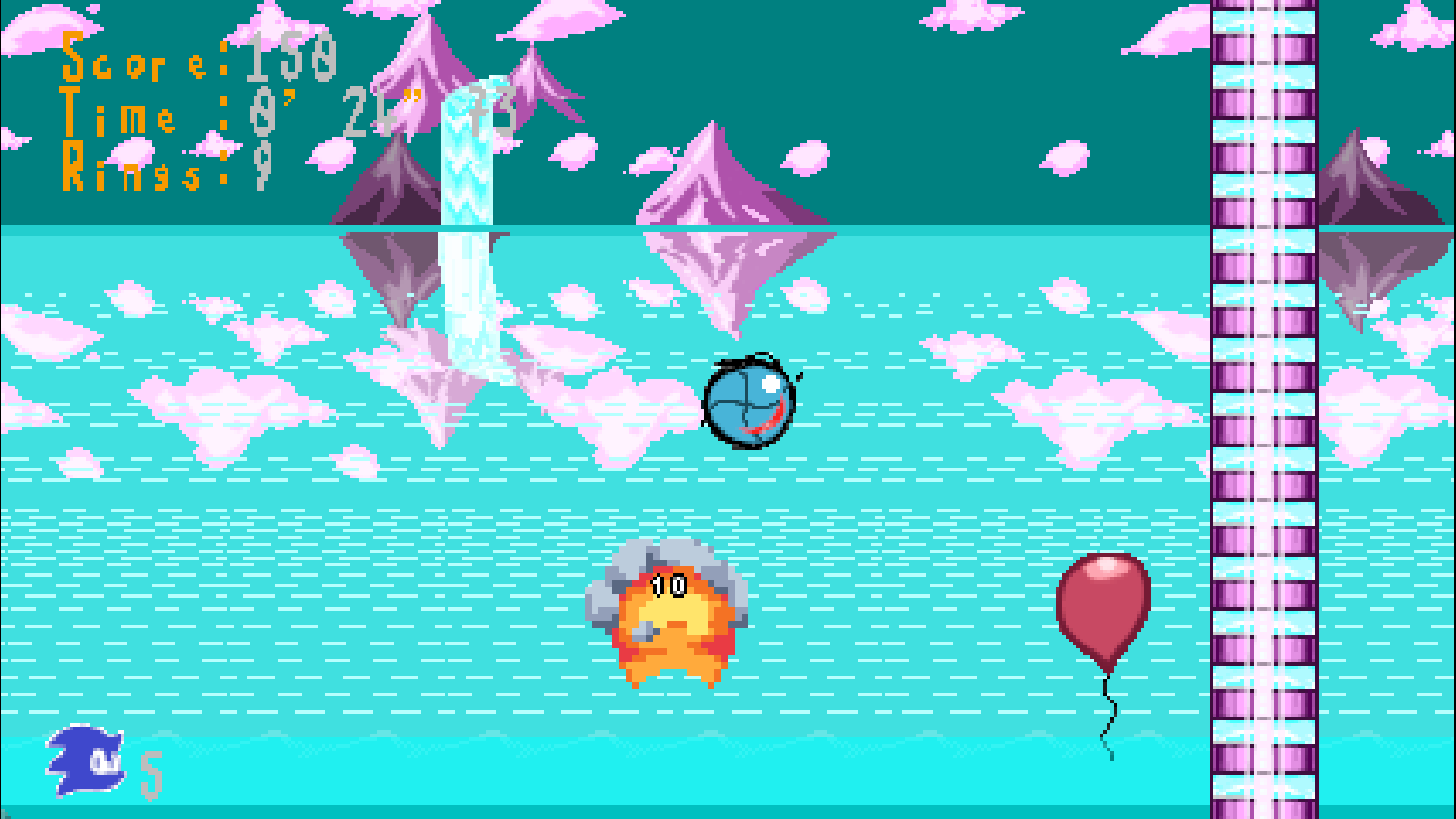 This project aims to:
- Honour the original game's difficulty
- Modernise the gameplay to Sonic 3&K/Mania Standards
- Re-imagine the level design & Boss fights
- Tell a story that connects it to the 16 bit games.

This game is powered by the Open Surge engine, a free and open source learning tool!

Known Issues that I would like to fix (but do not yet possess the knowhow):
You can reset any level if you experience any rare softlocks. Press F12 to enter debug mode then press Ctrl + R to reset the stage.
- The Barrels in Sky High Zone Act 2 do not like being drop dashed into
- Audio mixing has not been properly balanced
- Aqua lake Act 2's main gimmick is not polished, causing the water level to sometimes behave erratically.
- The game still features no save. (I am looking into it but I still do not understand)

Major update for SAGE 22! New art, levels, bosses, cutscenes, menus, engine upgrades, bug fixes and changes to make for a more pleasant experience. Too many to list! Any further updates will be logged here.

17/09/2022
AS2R SAGE 22 Demo v2:
Opensurge 0.6.0.1
- Controller remap (All buttons now jump, exit has been moved to select)
- Pipes Updated (rare softlock hopefully fixed, have not been able to replicate)
- Bubbles spawn quicker
- Performance and fps optimisations
AS2R v2
- Level design tweaks, most notably in ALZ
- Decreased Master Sealion 2's ranged attack radius to 150px
- New modes!
- Casual Mode: An easier mode with bottomless pits removed, direction signs added to maze levels and easier bosses
- No Rings Mode: Another mode. I could have gone crazier adding more remix modes. I'm not sure if people will even play this one. Let me know if there is interest
- Time Attack: One chance to race to the goal. Screenshot your best time!

Oh my god this is amazing! It's so unique and full of quality in the style and music WOW!
Reactions: JustJohn43
I love this!

i appreciate everything that this person was doing with this project and im looking forward to see more!
Reactions: JustJohn43
The game is neat, though I'm giving it 3 because of such drawbacks:
1. The level design is decent, having a good balance between challenging and entertaining tracks and loops. However, I'd suggest naming this game not a remake, because isn't the remake's purpose to recreate the game in the fresh code of paint, but also to maintain the original game's feel? This fan game is too different from the original. Perhaps name it "Sonic 2 Reimagined" or 'Sonic 2 Remixed"?
2. The hand-drawn sprites are not bad, but cause a clash because, on one hand, you have Sonic's and background sprites, which are hand-drawn, while the level itself is pixelated. Also, they can be inconsistent, for example, Sonic becomes bigger when he gets hit.
3. The levels can drag for too long, taking in a range of 4 to 12 minutes. The 3-1 level took me the whole 12 minutes, which I guess is not intentional, since it has even caused the timer to count like it's from 1 minute. I don't know how you can fix that, but it's just something I didn't like since I felt burnt out while playing this demo.
4. The bosses are questionable at best. The 1-1 boss doesn't have something called "the laws of physics" since the ball shouldn't just jump on the hill that goes up, just because Sonic is there. The 1-2 boss doesn't tell the player what to do. I was lucky enough to spindash just because I wanted to, but I can see this boss being confusing for other players. 2-1 was fine, 3-1 was too easy and 3-2 was just ass. I was so confused why didn't he pull up his ball after he bounced under me? He was just standing there, waiting to bounce on again and repeat the same process 'till I died because I fell in the water. I was about to rage quit, but fortunately for me, I was able to cheese this boss fight by just moving my camera so he would be on the corner of the screen and only then he pulled up his balls. Please replace it or fix it..
5. Personal preference, but I'm not a fan of some remixes you chose.
6. And finally, the bugs. There were there from time to time. I can't recall what I encountered, since I can't remember anymore, but I remember that doing a peel-out on some clouds can cause Sonic to slowly go down.

Anyway, it's a hit-and-miss fan game to me right now. You can take my criticism into consideration or not, it's up to you. But my opinion will stay the same until you do.
Reactions: JustJohn43
J
JustJohn43
Thank you very much for writing this detailed review. This will certainly help me going forward!
1. Thank you. Level design flow is important to me. I will be sticking with the name AS2R as it has more layered meaning. I have been honest in the credits and said "based on the original" XD
2. Absolutely everything (barring a handful of OG opensurge sprites for effects) has been hand drawn on the ipad app procreate and then converted to sprites on a PC, including the backgrounds. I am still learning but if you could give me any art tips going forward, that would be great. Sonic's sprites clash as some of them are the original pencil & paper ones. Are there any animations in particular you really liked that I should use as a foundation?
3. I can only apologise for burning you out. I am also sorry that there is no save feature. I am making some key considerations for the final game because the last thing I want to do is upset a player
J
JustJohn43
4. Now boss design. I apologise for ALZ. They are incomplete as they were made a month before the event, I hope to make the ALZ bosses more exciting and easier to figure out. Interesting cheese. Each boss does indeed have a cheese method. I am an enjoyer of patience and animation based combat like Dark Souls & Monster Hunter. I find 2D sonic bosses to be boring and I wanted the Master Robots to be memorable. I like Dimps. I hope this helps explain my thinking. This will be a point of contention for sure and I expected it. Your comments are all fair!
5. Music taste is all subjective, but what were your favourite and least favourite tracks?
6. If you encounter any bugs please get in touch and show me exactly what happened so I may fix. You can take a screenshot with +

Sounds like I do not even deserve this review! But you did it anyway! Thank you very much for your time.
Read more…

This game is a lot of fun! I love the sprites and the music, but unfortunately the level design can make you feel lost sometimes and the last boss is a little confusing.

Despite that, its a great game!

Afonso14 said:
This game is a lot of fun! I love the sprites and the music, but unfortunately the level design can make you feel lost sometimes and the last boss is a little confusing.

Despite that, its a great game!
Click to expand...

Thank you for your comment. I admittedly stitched that boss together a couple of weeks before the event. I think I have figured out a better way of scripting the boss behaviour after watching my friends try it. And as for feeling lost, I did refrain from sticking signs with arrows in the levels like Sonic 3 did. I'm curious to research if the level design gets less confusing on repeat playthroughs. But perhaps I should at least add a beginner mode that adds more checkpoints and direction signs to levels in the final game
This is super cool man! You did NOT have to recreate all the visuals with hand drawn art, but you did and it's incredible! I love how many rings you can get, it's so much fun. I also really like how you solved the hang glider's annoying controls by just making it a power up that glides like Knuckles.

I will say though, there definitely DOES need to be arrow signs giving direction, I'm convinced Sky High 2 has no exit and is just an enormous maze.

AortaPlatinum said:
This is super cool man! You did NOT have to recreate all the visuals with hand drawn art, but you did and it's incredible! I love how many rings you can get, it's so much fun. I also really like how you solved the hang glider's annoying controls by just making it a power up that glides like Knuckles.

I will say though, there definitely DOES need to be arrow signs giving direction, I'm convinced Sky High 2 has no exit and is just an enormous maze.
Click to expand...

Thank you very much. These comments about confusing level design have been noted, and I care very much about accessibility. One of my favourite comments about the level design taken from a playthrough on Twitch said "feels like a Metroidvania at times". I'm pretty sure he mean't it as a negative, however, I am thrilled about this observation.

If I may give you some hints regarding Sky High Act 2. Each Level has it's own theme and identity. The theme of Sky High Act 2 is "environmental puzzles" and our built in "rhythm of three". Followed by the sensation of freedom. It is possible to complete this Act in 2.30 for myself. I have given the player a hang glider the moment they are free for a very good reason. There is a "sequence break" if used correctly. Try to channel your memory of Gimmick Mountain Zone to find the exit! You can do it! :)
Last edited: Sep 3, 2022
You must log in or register to reply here.