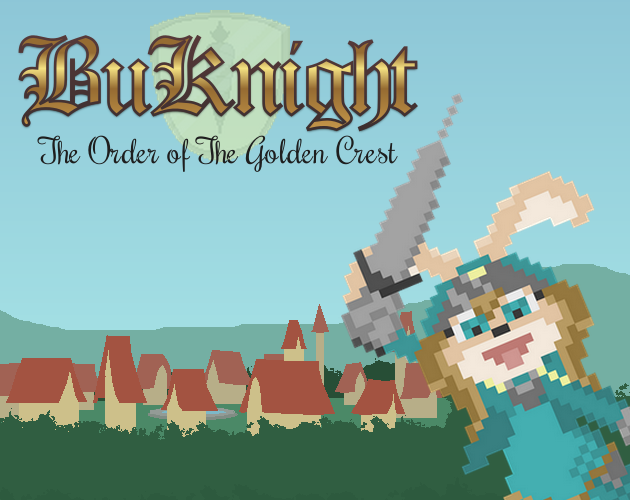 Summary:
The village of Carrottia is under attack from the wolves (again)... and they have company. It's up to the rookie Bonnie to save the day from this canine menace. Jump, slash and spin through the various tracks to fight back and recover the parts of Carrottia's sacred treasure: The Golden Crest.

BuKnight is a fun and speedy action-platformer mixing the late-90s era mascot fever with the mid-2000s indie game craze. Use your up- and downsmash attacks, as well as the special swirling move to hurl pain at your enemies or to change your momentum and dodge their attacks as your zoom past or towards them. 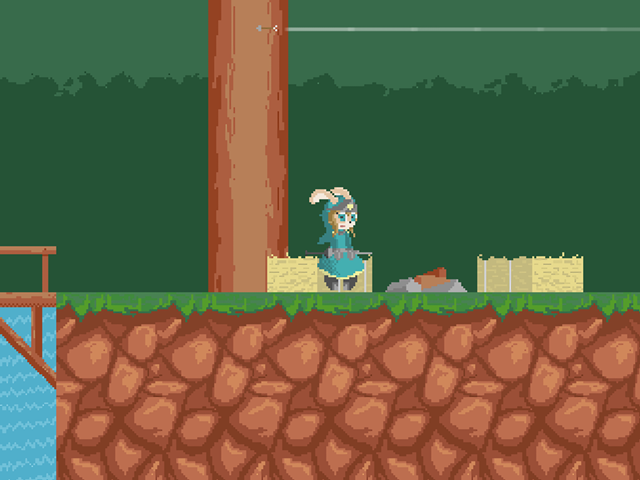 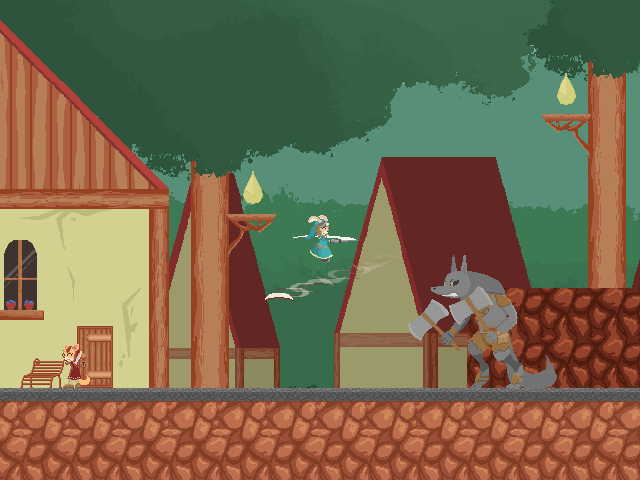 Controls:
Arrow keys - Movement, jumping and crouching/climbing down
W - Looking up and climbing up
X - Standard attack, holding up and down midair can make it an up- or down-smash, left- or right for side-smash
C - Whirling attack, grants invincibility during animation.
P - Pause the game
Enter - Navigating the menus
Esc - Quit

Need more?
Subscribe to my RSS feed on Pawoo for bite sized updates or check out my Toyhouse for BuKnight-related art.

Well Knights, I will swallow my pride this time and concede: You were all right, the sideways attack was a good idea. So good in fact I don't think I'll postpone it months until I figure out a way to overhaul the control system.

From this patch onward, holding left or right while attacking airborne will allow Bonnie to perform a sideways cleave that will halt her momentum, effectively making her hover mid-air for a split second. As well as for nabbing at enemies in the air, you can also use this to save you from a projectile you found yourself dodging too early, or when overshooting a platform.

This patch also fixed the bug where holding any key on your keyboard at all would result in Bonnie running at a constant speed, this bug now only persists using the bound keys the game uses. I have also added a few extra frames to BowFox's shooting animation so she will not pellet you as often.

Enjoy and stick around.

Also, I'd like to thank all of you for the nearly 300 downloads on the previous version.

---
Tiny update: BoomFox was acting up not throwing her boomerang in the latest 0.5.2 release. She's now wrangled in and the release file has been switched. Sorry for the late fix.

This is a great game centered around an interesting character, I would love to learn more about her in the future. You did a great job at meshing together the eras you were aiming for. I do believe the enemies need a bit of work though, perhaps some nerfing to their AI, or as another reviewer suggested, giving the player some defensive moves.
The sound was amazing, both the music and the voice acting. I look forward to seeing where you take the finished game.
Reactions: The-Syreth-Clan
I can see what you're trying to accomplish here, but there are still a couple of things that I need to complain about. The game is quite unbalanced, enemies can shoot you off-screen which can lead to unfair deaths and hits. There's no real reward for defeating enemies, so the best thing to do is just avoid them since you will get hit anyway due to the enemy's aim. Also about the enemy's aim, it's quite hard to avoid getting hit by the enemy since their aim is nearly perfect and will get you unless if you're running. A recommendation I would add is some kind of defensive move to protect yourself against enemies. The least I can give this is a good rating since you have some great ideas but they need ironing out. Fix these problems and I bet you'll have something amazing here.
Reactions: The-Syreth-Clan
Read more…

Which version of Game Maker was this made in? I played it on my stream, and the old Game Maker stuff really threw me back. Especially the midis.

I like the main character. She's kinda a bamf. The swordplay was fun, though I wish there was controller support. (Unless there is, and mine didn't work for it.) Might come back to this one!

WhiskerMidi said:
Which version of Game Maker was this made in? I played it on my stream, and the old Game Maker stuff really threw me back. Especially the midis.

I like the main character. She's kinda a bamf. The swordplay was fun, though I wish there was controller support. (Unless there is, and mine didn't work for it.) Might come back to this one!
Click to expand...

It's made in Game Maker 8.0. Thanks for the feedback and the rating, it's much appreciated. Unfortunately there is no controller support so you'll need to use something like JoyToKey.

The-Syreth-Clan said:
It's made in Game Maker 8.0. Thanks for the feedback and the rating, it's much appreciated. Unfortunately there is no controller support so you'll need to use something like JoyToKey.
Click to expand...

Understood. Controller support is a PAIN in Game Maker 8.0. I know that from experience. I'll try it out with JoyToKey next time. I'm out of practice with the keyboard, lol
You must log in or register to reply here.