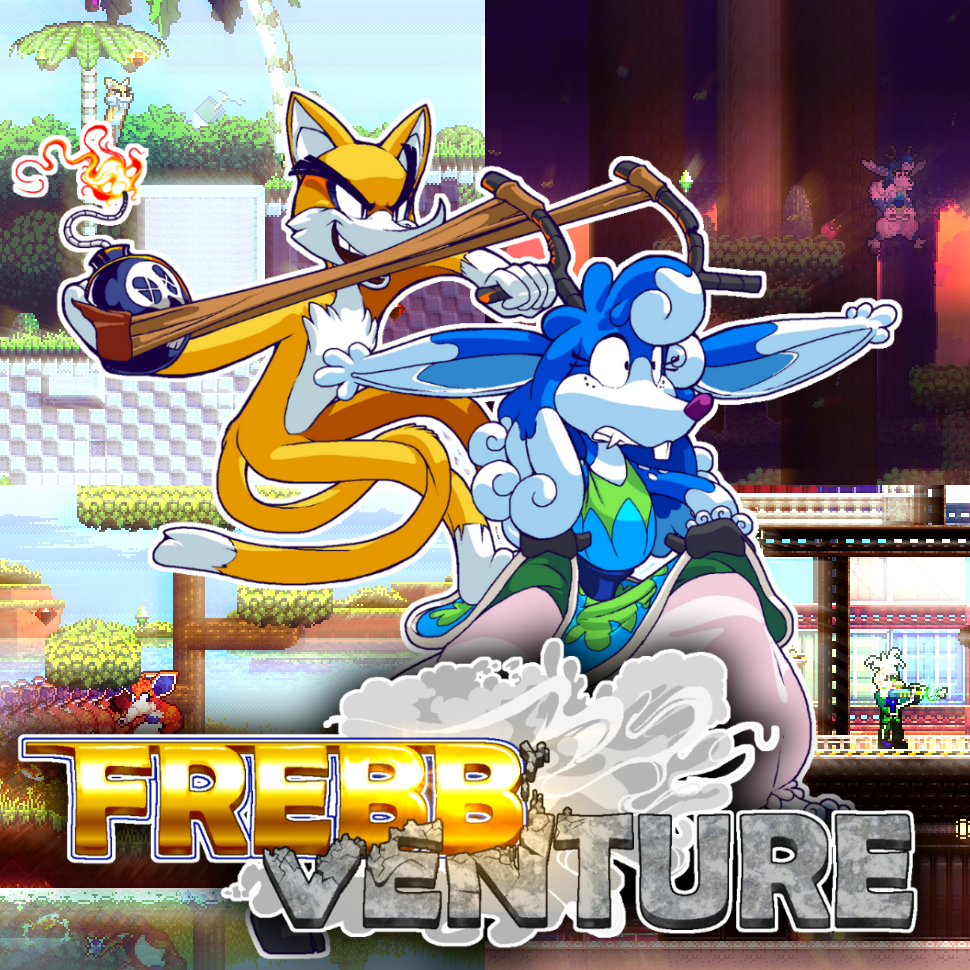 In a world gone wild, there's only one animal who's man enough to put his foot down! All the grumpy Frebb wanted was a good night's sleep every now and then, but when he learns the mac daddy of the planet is making his centennial celebration a year-long rave, he unwittingly declares an all-out war. Take control of Frebb and his growing cast of reluctant 'friends' as they traverse beautiful but hostile territory, crash deceptively insidious parties, and bash through the sycophantic minions of unscrupulous celebrity villains!

If you ever wondered how a Kirby inspired action-platformer would play if you ditched the copy gimmicks and smashed the speedometer, Frebbventure is the game for you! With four playable characters, you've got plenty of movesets to master, and a variety of special bonus medals will reward you for learning the levels, too. Collect them all to unlock bonus stages, and peel back the layers of a shocking secret.

Beware on your quest, as Ulcethot has many friends in high places. A colorful rogue's gallery of boss characters and monsters are waiting around every corner to thwart Frebb's efforts, so never let your guard down and always be prepared for the worst!

The tricky platforming and countless hectic boss fights might get a bit overwhelming at times, but fear not, because an imaginative and humorous plot (that's still not afraid to raise the stakes!) is there to accompany you through. Frebbventure explores and lampoons the absurdity of culturally-approved rebellion and mass-market edginess through a manipulatively hip villain, a mercilessly unindulgent hero, and a comically mismatched supporting cast.

The post-SAGE build is a'go! With opinions gathered from the lovers and the haters alike, I've further refined the balance and accessibility of Frebb. What's changed?

- Ground traction and acceleration have both been increased.
- Gaining momentum midair is now slightly easier.
- Added a 'head bonk grace period.' Frebb now 'sticks' to the ceiling briefly after bumping it, instead of dropping instantly.
- Slopes are a bit more reliable.
- Frebb's 'Frebbzooka' and 'Magic Hammer' attacks are now a bit faster to use.
- Frebb's 'Spin Punch' not only boosts vertical momentum but makes him slightly lighter while active.

- Checkpoints are now more plentiful, especially directly before and after minibosses.
- Defeating the 'mixmaster' miniboss and dying during the escape sequence no longer requires you to refight him.
- Vehicle stages now feature checkpoints.
- Fixed a code oversight that caused the Catbird vehicle to take no damage on crashing into walls.
- Added a few nifty visual effects.

Copy this file into your Frebbventure_0_4_1 folder; if that folder does not already exist, create it yourself. I recommend copy-paste, rather than cut-paste, as you may want to retain a backup in case something goes wrong!
Share:
Reddit Pinterest Tumblr WhatsApp Email Link

I played this last night after downloading based on the animation you have showcased here. I was pleasantly surprised by the quality of the writing here. A great and promising 2D game that seems to be inspired by Donkey Kong Country and Sonic! Little issues that could enhance the experience would include Fullscreen (I couldn't figure it out if it had one) and Switch controller support. Keep up the good work!
You must log in or register to reply here.