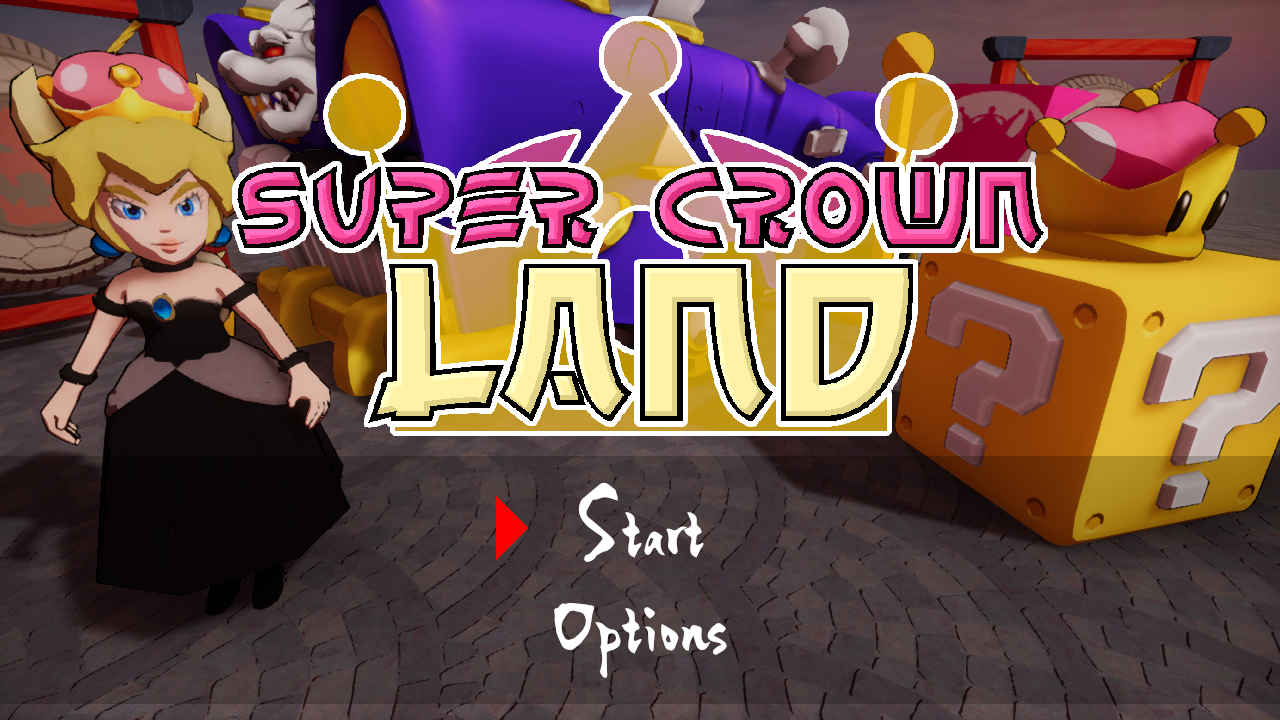 I played this game for a solid hour and a half, and... well, I have some things to say.

Story/Writing: Pretty simple story. Bowser's minions aren't a fan of the new "Bowsette" look, and so they're rebelling. Unfortunately, the game's writing is... very same-y. Most of the writing is just "Hey, Bowsette! the other minions of my species are jerks who are rebelling against meeeee!" "No problem, I'll show them the power of the Super Crown!"

There's also a lot of very stereotypical writing choices in here. For example, Goombette constantly says, "It's not like I wanted to do this, idiot," which is not the way to write a tsundere. It's the one thing you make fun of a tsundere character for saying. Other characters have similar writing mistakes, but this is the most awful. If you're gonna advertise the story as being written in VN style, maybe put a bit more effort into it.

Visuals: I'm pretty sure most of the "original" visuals here are stolen assets. Particularly in the loading screens, since there's a lot of borderline NSFW content in them and even the original comic Bowsette came from.

There's a somewhat nice lighting engine, however there are a lot of problems with it. In dark levels where you're not supposed to use the light block powerup, it's still hard to see, and in levels with better lighting, there is no landing shadow. In a 3D platformer, shadows are absolutely important, since they help you see where you're going to land. If your character's shadow isn't directly underneath them, platforming becomes incredibly difficult.

I should also point out that there are nine alternate models. Three of them make sense, those being Mario, Luigi, and a more anime-proportioned Bowsette. There's a Sonic one that sort of makes sense, but feels like he was just there to have a representative from another related series. Infinite is another one, which is a very arbitrary pick. Why him? Is it because "OMG COOL CHARACTER?" And if so, why not pick a more well-known pick like Shadow? Anyway, there's also a set of five with more human proportions. I already mentioned the alternate Bowsette model, but the others make no sense. Naruto, Neptune from the Neptunia series, Rem from Re:Zero, and Kanna from Miss Kobayashi's Dragon Maid. Naruto feels like he's just there for the stereotypical anime character pick, and the others seem to just be there for waifubait (which in Kanna's case is actually problematic because she's an actual child).

Gameplay: The game plays a lot like a normal 3D Mario game. Run, jump, stomp enemies, the works. However, Bowsette's jump is very heavy and hard to control, and you transition from rising to falling VERY quickly, which can make landing on enemies difficult. There is also some very wonky collision detection, meaning you can slip off blocks or springs very easily. (I legitimately had trouble with the first red coin section because I couldn't land on the springs.) In most Mario games, you can stand on the very edge of a platform, something that's basically impossible here. Also, the hitboxes change depending on the character, causing problems for more human-like models.

As for the premise of the game, collecting stars to open up new parts of the castle is a tried and true method, and it does work here. There's a simple joy to be had in this gameplay style. And despite the weight of the character, it still feels like traditional Mario gameplay.

Overall, I feel like this game has potential, but the awful collision, writing, and questionable character choices hold it back. If these got fixed, I'd risk the judgemental looks my friends would give me for playing something like this. But in its current state, it just feels like the developers were more focused on how neat the concept would be instead of how good the final game should be.
stupitest game i have played.the walls are too wide apart so you can't wall jump and the controls are fucking terrible and the damn camrea will not stay still!
Last edited: Nov 14, 2020
You must log in or register to reply here.