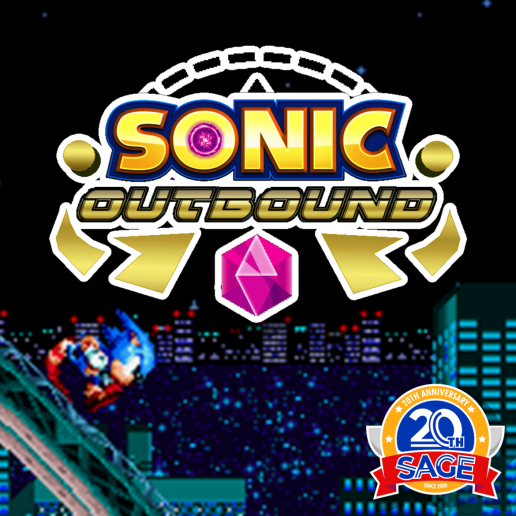 
Basically, it's an alternate timeline where you get the bad ending in Sonic Mania.​
After being defeated in the Titanic Monarch, Dr. Robotnik tries to study the power of the Phantom Ruby, "The power of this stone is far beyond anything I imagined, as if it could surpass every boundaries possible, my metallic experiments ended up in mediocrity, it's time I level up my game...".​
He locked himself up underground in a bunker working with what was left of his plans and most important machines. He finally created the first being powered by the phantom ruby, using Sonic and his friends' DNA, Meta the Eternal, the most powerful Eternal in the universe; Eternals are incredible beings that never ages and are virtually indestructible. This new creation was learning at an insane rate and its intelligence nearly matched Robotnik's, her awareness surpassed the 12th level and she began looking for beings capable of fighting equally against her.​
She eventually learned about the existence of Sonic, a blue hedgehog Eggman seems to hate deeply. After months of intense planning, he discovered where the phantom ruby originated. From The Supreme Ruby, something with truly unlimited power, something that controls the mere existence of the multiverse.​
Meta and Eggman were finally ready to conquer the planet, no, the universe, but Meta, being free-willed, wanted something more, she wanted to battle "Sonic the Hedgehog", but the only way to do that was to kidnap every person standing in her way, so she decided to trap Sonic's friends in solid capsules.​
Sonic will have to free his friends to take down Meta at any cost... but how?​
__________________________________________________________________________________________________​
About the game​
It's unsure if the game will be ever completed one day, but we sure hope so!​
In this game, there are two zones, with 1 level to play with each, and a boss level. Each Act 1 levels end with a Mini-Boss battle, and Act 2 levels end with a Big Boss battle.​
You got 3 playable characters, the same as Mania: Sonic, Tails, and Knuckles. They all have a new ability if you press the special button. Sonic got the Homing Drive, where he can go higher and faster with it. Tails can defend himself easier when flying with his new Tail Whip. Knuckles can finally go faster with his Mega-Punch, where he can destroy enemies while running.​
It may not work on some computers, for old computers, it will do the d3dcreateservice() error and another error that I don't know why it happens, but it happens on some computers.

Title Screen (or Sonic falling from the sky)

Sonic is surfing through Heaven Shore for vacations.

Oh no! Meta and Eggman have kidnapped Amy!

Run through the majestic Heaven Shores!

And save Amy Rose.

1. When Knuckles climb a ledge, he gets locked, click R to die immediately, or pause, then click Restart to fix, unfortunately, when that happens, you must start the level over.

2. For some still unknown reason, you might get that error if you play the game.

I'm sure this is a fine game but it won't start up for me. All that happens is a truck load of errors. I could post them, but there's so many just over and over... and when I tried again it said "Out of memory?"... hopefully you can get it fixed so I can check it out cause it looks fun.

Dashaque said:
I'm sure this is a fine game but it won't start up for me. All that happens is a truck load of errors. I could post them, but there's so many just over and over... and when I tried again it said "Out of memory?"... hopefully you can get it fixed so I can check it out cause it looks fun.
Click to expand...

It's your computer because mine never did that.

-Akurio64
If you have Discord, I can help you.

I have plenty of RAM, I just get these errors when starting up.

Error in code at line 1:
if exit_v>1
^
at position 4: Unknown variable exit_v

and it goes on. Am I missing some files or something?
pingers moment
Yes, you are missing files.

-Akurio64
what files you have
the level design urgently needs improvement because it becomes very frustrating, but I really enjoyed the music
Ik @TheSonicbandicootX, I just can't do proper level design.

-Akurio64
I just noticed the version of the OST Akurio sent is in mediocre quality and has a terrible amount of extra bass so I'm gonna re-upload it as soon as I can, if I want one thing to be remembered from this game, it's its soundtrack.
Last edited: Oct 20, 2020
It just wont start up
This game really shouldn't have even been released yet. A weird OC Mania sprites meshing with megaman sprites and advance tiles really unfun and awkward level design. I would go on but I know the developers are already mostly highly aware rather get into what at least I think is or could hold this fangame back a lot.

The OC: Listen I know OCs get a really bad reputation but that's not my problem in fact I really think a lot of Sonic OCs are pretty good. However this OC either needs to be removed or a exteme redesign. Why? OCs really only get a bad reputation when there just other characters like Sonic or Knuckles recoloured. This character is just Sonic Tails and Knuckles with a different colour and longer legs.

Dr Wily: Was this supposed to be a reference to the comic(s)? Cause if so it REALLY wasn't needed. Crossovers sometimes are fine but are never really needed mostly in fangames. This is a case of it was never needed and just seems stupid.

Level design: Time to get into the more main things. Its pretty bad. I read why it was bad on a comment from one of the developers so I won't get into this too much and this will be more of just suggestions than anything. My main problems are: gimmicks are reused so much how there is mostly one path how momentum is not really accounted for how short levels are how the second zone is just always a boss how none of the characters moves actually fit the level design how messy the level is (ill get to this more in depth soon) how bad the psychics are (ill come to this again aswell). I know the developers probably know this already but even if so I think just a reminder never hurts.

Graphics: I won't lie it kinda hurts looking at this. So much is stolen from megaman advance and mania which doesn't not even mesh well in the first place. This game graphically needs to completely be redone. There honestly is no adding that can fix the mess the graphics are in at this moment without completely restarting.

Pyshics: I mean do I even need to say anything? For a sequel to Mania it controls nothing like it and is much worse than Mania. I won't get too in depth cause again I saw a comment from the developer about this but even then like I said a little reminding doesn't hurt.

I really hope this can help the project some cause it seems like if it doesn't get out of this awkward state its gonna need a lot of help. But yeah hoped you enjoyed reading this. As per usual I made a review late at night really tired because I'm a little bored so might fix my mistakes and make this less of a mess in general. Anyway like I said hoped this helps and thank you for reading.
You must log in or register to reply here.