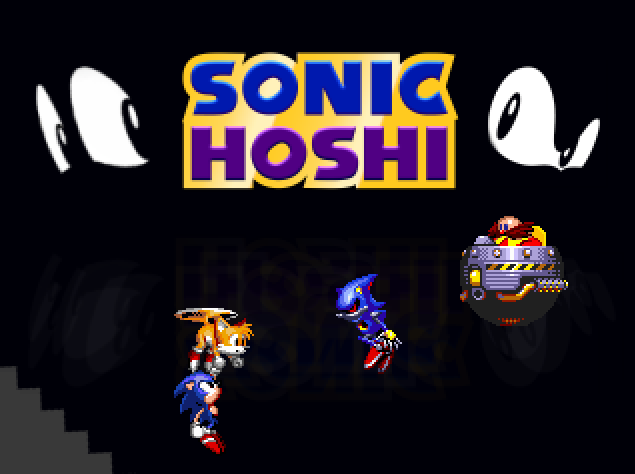 Sonic Hoshi is a 2D fan game that fits in-between the story of Sonic the Hedgehog 2 and 3.

==THE STORY==
After collecting the seven Chaos Emeralds and defeating the Death Egg, Sonic and his new friend, Tails, are attacked by a familiar foe, Metal Sonic! Metal knocks the seven emeralds out of Sonic, striking down Sonic’s Bi-Plane, the Tornado, as the duo crash land on the unfamiliar Starshine Island. Upon arrival, Sonic and Tails notice that their surroundings have been trampled by Badniks, while the nefarious Dr. Robotnik appears to be multiple steps ahead. Robotnik has begun the investigation of the island's mysterious ruins, A temple containing a powerful entity known as the Celestial Star. Rumour has it this star can rival the power of the Chaos Emeralds when fully powered, but it’s a race to see who can power and retrieve the Celestial Star first!

This game was designed for PC only, and has 2 separate playable characters, Sonic and Tails. 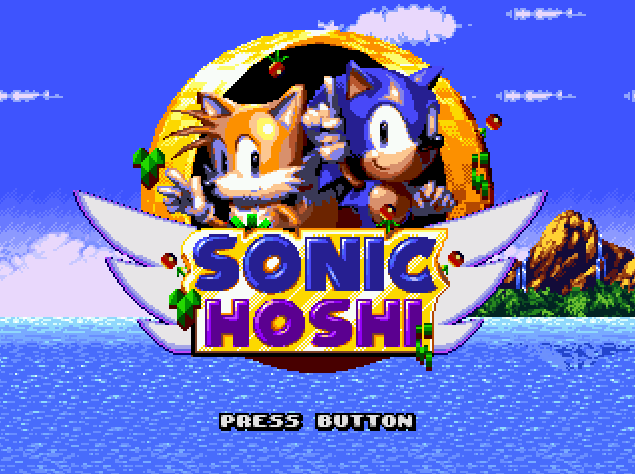 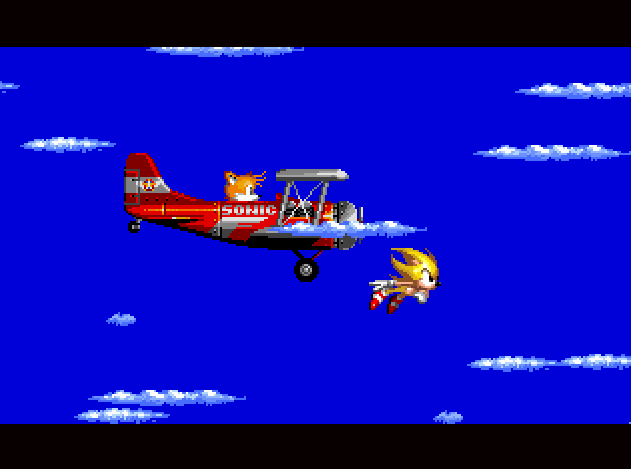 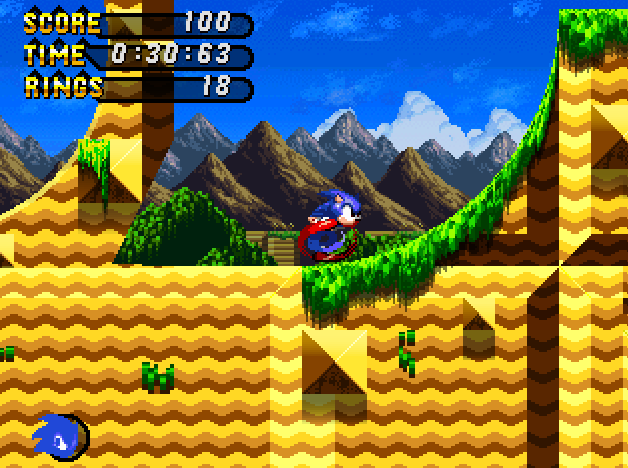 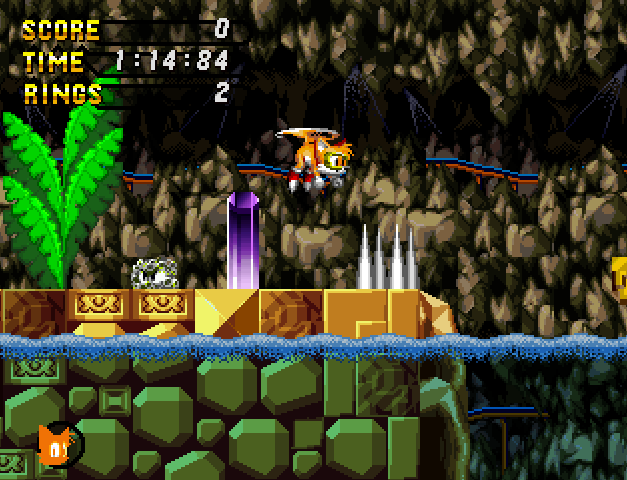 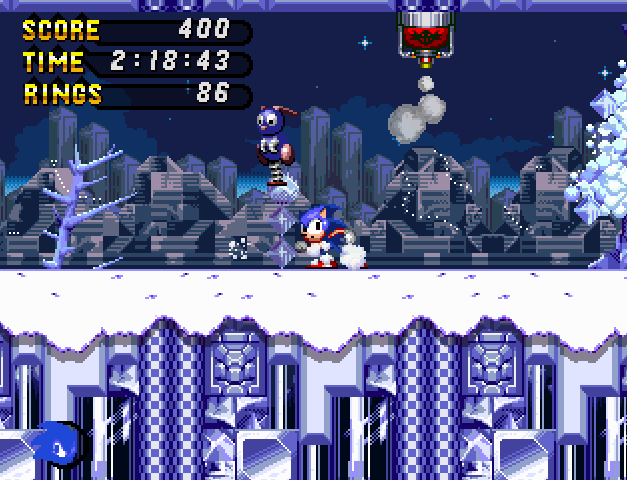 I FELL IN LOVE WITH THIS GAME!!! The music was fantastic, the gameplay was on point, the levels looked amazing and metal sonic at the end was super dope! From start to finish this game had me hooked! Also the Star Dash has to be one of the best additions to sonics move set and it is so amazing to use! There is only 2 minor things with this game, the first is that there should be a way to adjust the controller layout and second is that Tails flying looks kind of weird, this is just personal preference I suppose but tails flying upright is odd but besides that, Sonic Hoshi is fantastic and it has the potential to be one of the best Sonic Fangames ever made!

Last edited: Sep 17, 2022
Yo this demo goes HARD, the air dash makes everything so dynamic, and this whole Chaotix esthetic looks great, but more importantly Metal Sonic is so DAMN cool in this demo, this ending will stick to me for a while.
I did feel a little too overpowered due to that air dash, but I guess that is also what made it really fun. Remapping option would be welcomed too.
Really excited to see more about this fangame !
Reactions: ahmed2020gt
A very great experience all around in the demo! I have no major complaints, but sometimes the star dash seems to not work? I guess I misunderstood its use, I thought of it as a simple Jump Dash that hacks tend to add. This fan-game also reminds me of 2010's era of fan-games, and also stylistically looks like Sonic XG, which is a good thing. Level design is good, Bosses are impressive, music is just ok, everything is cool! Definitely will be waiting for this fan-game's completion!
Reactions: ahmed2020gt
Read more…

Really, really good fun. Honestly amazing work, I was smiling the whole way through playing this demo. The addition of the star drop works well and helps mix up gameplay compared to other Sonic games, it's not the typical homing attack and is instead an additional launch which can be leveraged in surprisingly creative ways. The music is very catchy and appopriate to the style that the devs were targeting. The level design is also great which is the main hurdle, but I was particularly impressed by the smaller touches like:
These all add up to demonstrate the amount of love and care that went into this demo. I really do hope this game gets completed because there's the potential to be the next best Sonic fan game here. Please keep the amazing work up! The only request I have is maybe the addition of sharp/soft CRT filters in the options menu a la Sonic Mania, but that's just my preference. Simply brilliant.
You guys went absolutely HAM on this demo especially the cutscenes my goodness! The level of care and attention to detail in everything is truly astonishing and I have nothing more to say except keep up the great work!
Will there bê for Android?
Could you make a ost for this great game
Music slaps so hard in this absolute highlight. Sprite work is beatiful too.

In short, this game is great!
That was AMAZING!!! Really liked it! Anyway, here is my review on it:
I played the first demo of this and really liked it. And after playing this new demo, i saw that you people improved it a lot.

First of all, the Gameplay:
The Gameplay wasn't really different from the first demo. But it has some new stuff to it. like the Ice Shield and the snowboarding. The ice shield doesn't have much to it, like no abilities. It just prevents the player from ice obstacles. The snowboarding part was neat. Yeah... i know, snowboarding is used in some in 2D Fangames but this onewas a bit unexpected for me. Like really, who expects a snowboarding section in the middle of the boss?

Next one, the Graphics (& Cutscenes):
I really liked how the graphics have been improved over the last demo. The level tiles, background objects, characters, badniks... In short, almost anything is improved. It looks more detailed than the last demo. also the new sprites for Sonic and Tails are really good and give this game it's own spirit. Also the Title Screen changed. I liked the old pre-rendered Title Screen, but this one is awesome too. For the Cutscenes, they are improved and it adds more to the story of the game. That is really good and i liked it a lot.

Almost forgot to mention, the New Things:
About the new Zone, Grand Glacier, the desing is nice, is fun to play, and has some cool bosses. Speaking of bosses, that Act 2 boss felt like a Fan-made Undertale Battle. Has like 3 phases, Extremely epic, and challenging. That cutscene gave some good Anime Fight vibes. I liked these new changes.

About the Music:
Alright, i gotta ask somethings here. First, Why did you decided to recompose the soundtrack? Second, How did you made it even better? I liked the first demos OST but THIS? Oh boy it is AWESOME. The old OST felt more like a "Classic Sonic Game for the Genesis" Soundtrack but the new Music feels more original and gives the game it's own Spirit.

I'm really happy with what this game is now and i'm hoping to see this game released. I'm wishing everyone who worked on this a very good development process.
I remember this from a year or two ago and it's only gotten better since! The second zone is still blatantly Labyrinth Zone, but the new place does a great job of forging its own identity, and the amount of personality from the boss animations is great. This is Sonic storytelling as it was always meant to be, no voiceacting or hugely zoomed in sprites with smarmy expressions. Everything feels good to play here and everything works together.
You've ruined me. The Star Dash is so awesome, it's going to be like the Drop Dash in that I'll instinctively try to do it and miss it in every other 2D Sonic I play going forward. What have you done.

HOW ARE THERE SO MANY GOOD GAMES THIS YEAR

My only criticisms are control support and a major bug- I played this with my RetroBit Saturn USB controller in Xinput mode, worked fine for normal gameplay but none of the buttons pause and the X button is the only one that jumps.
During the boss fight at the end of Glacier act 2, I died but I think I jumped on the same frame, which played the death sound and stopped the music, but also just dropped me down below the arena while the fight was still going on. Eventually the drowning music played to completion but even that didn't respawn me. And since there's no restart option on the pause menu...
Overall this is one of my favorites this year, but needs a bit more polish before main development continues IMO
what can i say after the prior comments? PLAY THE DAMN GAME
although i am sad to say that mystic mine brought me back to the labyrinth days
You must log in or register to reply here.