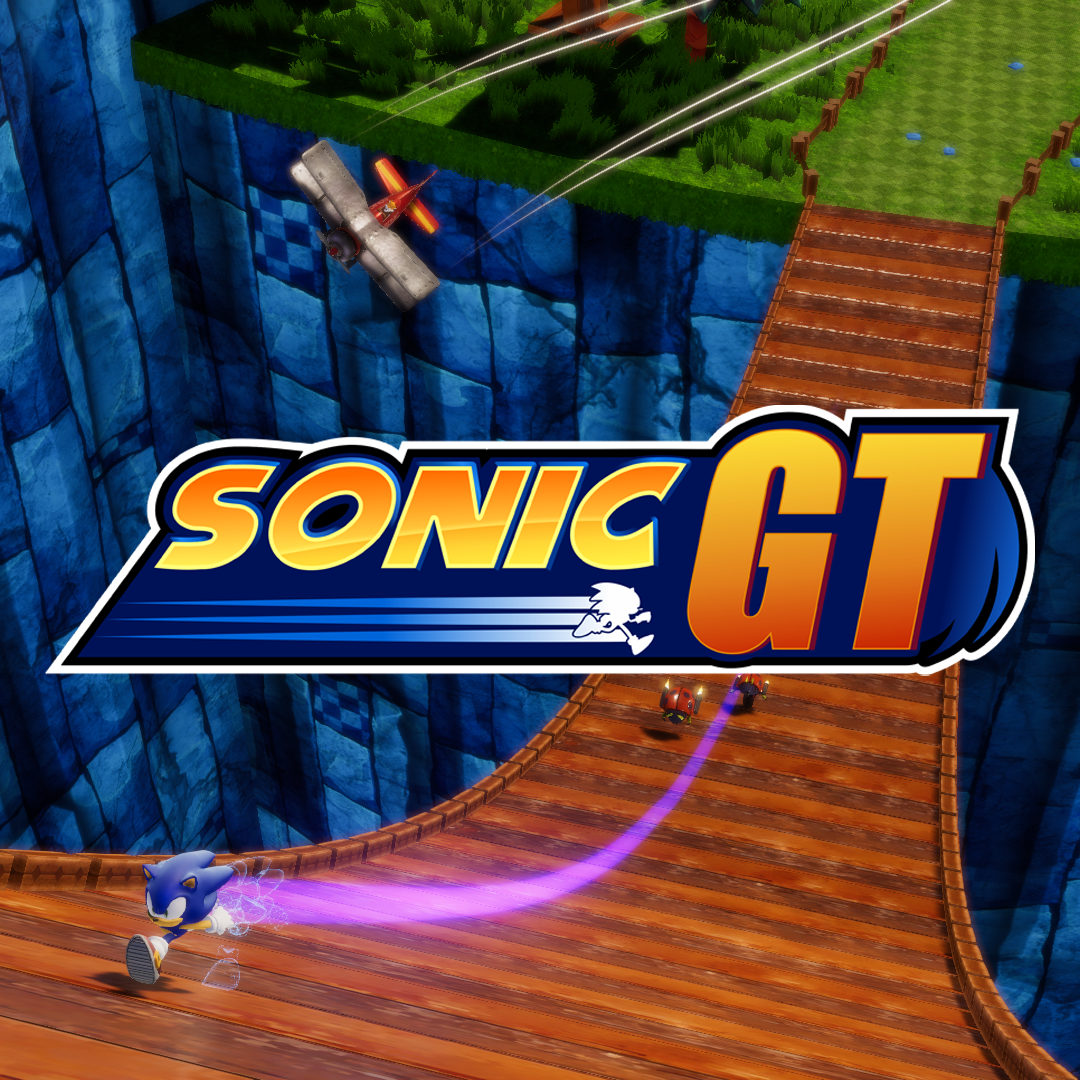 Step into the Grand Tour...
No, that joke is overused! Anyway...

Welcome! This is the release of the finally complete Sonic GT. We have 4 Huge levels, more than 3 unique characters, a fully voice acted story, secrets, a combo system, ranks, challenges you name it.

I hope you like it, it took me 2 years to get everything to this point and a lot of blood sweat and tears from everybody involved.

This fangame is absolutely phenomenal.

It isn't without its faults, but I have never felt closer in a game to what a 3d Sonic experience should have been until playing this demo. The physics feel great, the speed actually feels well earned and controllable rather than being assigned to a particular gamepad button, even the badniks actually present genuine threats that you have to think tactically to manage

Actually the most striking moment for me in this game was so simple, I was running down a hill into a valley, feeling the way the momentum was carrying me up the other end, then realising I was being chased by a motobug nipping at my heels and only just managing to outrun it, it was a sublime few seconds where everything about the game just felt perfect... thanks for that, really :)

I have never managed to play a 3d Sonic game since completely giving up on them figuring it out after being bitterly disappointed Sonic Adventure 2, in fact the rest of this review is going to be mainly directed at SEGA and how they did everything wrong and led everyone astray for 20 years.

There has never been any sense of freedom in 3d Sonic. You are going to run down this corridor, then jump on this spring, then bounce of these two badniks onto a rail that leads to another spring, and if you miss any of that, the game is going to kill you with a pit of death because the designer does not want you to go that way. This fan game goes a long way towards mitigating that feeling, the basic mechanics of level traversal are all pretty much the same, but there is enough variety in the routes that you can even end up wondering if you are going in the right direction - which is a breath of fresh air for a series that has never managed to break free from its linear two dimensional origins.

Actually Sonic's pits of death really are a crime against gamers and have become so abused over the years that the only right thing to do now is to banish them from existence forever. In the 16-bit Sonic games, they always existed but were used very sparingly and tactfully, in secret or alternative challenge routes, or in later levels in order to amp up the tension or challenge, and they often existed for a logical reason, eg you are actually on a flying fortress at 20,000 ft. Even Hill top zone only has a couple token ones as if to make a point that it's a long way down if you fall off the gondolas. In 3d Sonic, they exist because the designers hate you and need to keep you in a box. If you accidentally fall off into the sea at the beach, you instantly die a horrible death. It starts unapologetically at the first level Emerald Coast, and only gets worse from there.

This game still has a few moments like that because all Sonic games do, but despite that it shows signs that the author took a deep look introspectively and though to them self "does this mechanic actually do anything for the game?" if you miss a jump on the first level, you might fall down a waterfall to a lower area, or an updraft will save you from a precarious edge, and with no lives to speak of the worst consequence is you go back to a checkpoint if you really fall way off the edge. There were several moments in the first level where I thought "Oh No", then shortly after realised I was actually safe. It was a nice feeling not having to be yanked back to the last checkpoint for making a mistake.

In an ideal world, the perfect Sonic game would be like Zelda, where if you fall off a cliff and die, it is more than likely because you were pushing your luck too far. Zelda doesn't actively try and kill you for getting it wrong. You even have a parachute so you can potentially survive any fall. When you die, it's really on you, and because of that, the game never once feels unfair. Even if you argue you need some way to limit the play area and water is the only way, well Zelda boxes you in with water, but you really have to wilfully swim out to sea before you actually risk drowning yourself. Sonic still won't even sodding learn how to swim, grrr

The controls in 3d Sonic have also always been wildly unpredictable and suicide inducing. The homing attack is on the same button as the jump attack, so you always eventually end up homing in on something when you didn't want to and falling haplessly into the abyss. In 16-bit Sonic, you feel safe when you press the jump button because it does exactly what you expect it to do and you are always in complete fine control , in 3d Sonic, you never have any idea what the hell is going to happen because you are at the mercy of what the physics engine is guessing you want to do. The homing attack itself is pretty much a necessary evil because it is much harder to aim in a 3d perspective, but 3d Sonic has always suffered from combining both actions on a single button. Meanwhile the Y button is always wasted on the silly "lightspeed dash", which can only home in on rings, and only then when you are directly facing them from 2 inches away.

It's good that there are a variety of moves, but the way they are executed by the player has never had any kind of hard, brutal revision. No one at SEGA has ever stepped back and taken an executive decision to straighten it out into something that feels intuitive. Just the simple refinement of separating those actions into clear unambiguous "jump" "dash" and "attack" commands would be completely game changing. You have to get the simple things right SEGA before you start adding stuff on top! (oh who am I talking to I'm pretty sure they aren't listening)

Those are really the only faults I can find in this game. They are all features copied directly from the 3d Sonic design precedent example set by SEGA, so there is really no way I can fault the developer, but because this game just feels so damn good to play when things are going right, as a direct result of the fact that it does certain very important and crucial things its own way, then it is all the more frustrating that it has to be weighed down by the very same imperfect gameplay mechanics that have dogged the 3d Sonic games since the Dreamcast days.

But it is so, so close to getting it right, that I really genuinely have some hope again. I hope no one reads this review and finds it too negative - there are so many things about this fan-game that I love and have dreamed about, I am just really going for the jugular on the facets of the game that I think SEGA themselves have never gotten right.
Last edited: Sep 21, 2021

Domminic
REALLY?!? IT'S FINISHED?!? (aka haven't played this in forever)
cons: the tutorial was bit weird and hard to play and i couldn't really complete each section without dying. of course that how you learn is to fail but this tutorial didn't really feel like i want to learn, more like i was annoyed.
i never felt unsafe in tutorial.

the final boss i hate. i couldn't even barley get the powerups and coins to even live.

the first level i got lost and spent too long trying to find a way out. it confusing.
Last edited: Jun 20, 2021
Read more…

This game. Is like a sonic game. Where you ACTUALLY get to go fast. And it's FUN.
the fast enemies are terrifying and I genuinely felt like I should probably defeat them so they don't hit me, and I love that. You can get hit, yet the game isn't terribly frustrating to play. Why? Because you get to go fast. And it's FUN. Even if you fall, you can pick your speed right up again and go flying up a ramp to get to where you were before.
Oh! And running down hills is SO satisfying!
It even felt great to run along all the roadways thanks to the fact that I'm the one who chose to run down them and they all have fun great curves to them.

I'd also like to speak in defense of the boss fights.
They are INGENIOUS. The first one is everything I'd want from a Sonic game, with you going super fast to chase down a bad guy.
Then there's the second boss, which I thought was annoying and wished I didn't have to wait so long, and I was coming up with criticism for how it could be improved if you could jump off of its projectiles and hit it while it's flying. And then I tried that.
Turns out, you CAN.
All the bosses appear to be designed this way. If you're good at the game, you can hit them faster. If you're lazy, you can wait. On the first boss, it's rather difficult to hit the guy while he's on the rails and easy to hit him when he's on the ground. You can either wait, OR you can get good and GO FAST. Because this is a SONIC GAME WHERE YOU CAN GO FAST. MIND BLOWING.

The final boss seems a bit less so in this regard, I was only able to hit him once without waiting for him to fire his super laser, since after the first phase he seems to start turning towards you faster. I do love that you have to actually learn the mechanics of the game and bounce off the slopes to avoid his attacks. His shield popping up after you hit him means you'll have to wait a bit before hitting him again, but there's probably some way to go insanely fast and hit him from behind without waiting too long that I just haven't found yet.

There were, of course some odd glitches that I encountered, namely one strange invisible force that might have been intentional, during the tutorial area and right before the final hit of the final boss, that lets you hover over gaps. It feels a bit odd since there's no explanation as to why it's there, but hey I'm not complaining, it saved me from death-

I love this, and keep up the amazing work!
When i start a level there are a lot of weird graphical glitches and Sonic is invisible how to fix this
can someone give me a 100% save data via mega
Just wanted to say, this was, like, one of the only downloadable games I've come across, and let me say, Quite a good job! I would choose it over Sonic World, but This has a close tie with Sonic Utopia. Also, the game Sonic Grand Tour copied your application photo, and took it as their own! Please fix this mistake, and keep up the good work!
You must log in or register to reply here.