In 2001, Sonic Advance was released for the Game Boy Advance in Japan.

In 2011, Sonic Advance was ported to Android devices (only in Japan).

In 2021, Sonic Advance on Android gets brand new mods, ready for this game's 20th anniversary !

The Anniversary Mods Pack is a collection of mods of the Sonic Advance's Android port to celebrate the 20th Anniversary of the original Game Boy Advance release. The mods makes this game as followed :

First, the mods makes the game look better for Android devices with aspect ratios between 16:9 to 21:9. The mods were designed so the game looks graphically the same in 16:9 and lower.

SIDE NOTE :
Some menus, the opening and the special stages don't look perfect.
And the water animation in the first zone is slightly different to the original Android port. It actually resembles the animation from the original Game Boy Advance version.

The mods also have translated text inspired by its original Japanese version and the Game Boy Advance version's instruction manuals. The languages are English, Spanish, French, Portuguese and Japanese.

Alongside the different languages, there are 2 versions of the mods :
one with the original .MIDI soundtrack.
the other with the soundtrack with the instruments used from the Game Boy Advance version. The GBA mix mods are meant to use .OGG files.

SIDE NOTE :
The GBA mix mods do NOT contain the exact same soundtrack as the original Game Boy Advance version. Instead, they replicate the .MIDI soundtrack (with the exception being the "invincibility" tracks). This means the music uses for the first and second boss music of X-zone are actually GBA remixes of the .MIDI versions ("E.G.G. STATION ZONE" and "BOSS THEME 2" from Sonic the Hedgehog 4: Episode 1).

LIST OF PREVIOUS MODIFICATIONS/IMPROVEMENTS :
- Upscale the game canvas size from 284 to 373 pixels wide.
- Add extra graphics on certain backgrounds (some are ripped from the Gameloft version, others are either repeats or mirrored).
- Upscale certain zones backgrounds canvas.
- Make a GBA remix of "bgm_49_boss_f1" and "bgm_50_boss_f2".
- Change the "land on plane" sound effect timing of "bgm_38_ending_final" in the GBA mix versions.
- Upscale the confirm character select hit detection from 80 to 112 pixels wide.
- Remove the play "op_patch" sound command in the GBA mix versions to prevent listening to the same sound effect twice.
- Change the first zone's background water animation in order to work on different aspect ratios.
- Increase the background width of the Special Ending.
- Improve the game speed slightly by putting a Thread.sleep from 10 to 0.
- Make a Portuguese version of the mods.

From the version 2.0.0 :
- Smoothed quality texts in the HELP and CREDITS menu and in the TIPS board during loading screens.
- Sleep mode crash fixed. Instead of crashing the game, the RESUME screen will show up.
- Change the "rating in Google Play Store menu" into a simple "Thanks for playing" screen.

If you want to help me on my project, I'd really like to so we can improve the game as much as possible. 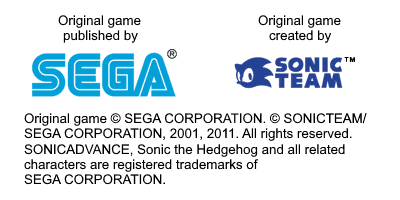 Of course !
You'll find a zip folder called "sonic-advance-anniversary-mods-pack.zip" on the Downloads section.
i love this, but i wish i could play it on pc

KoenProduk said:
i love this, but i wish i could play it on pc
Click to expand...

Well, you can play it via an emulator called BlueStacks.
You must log in or register to reply here.