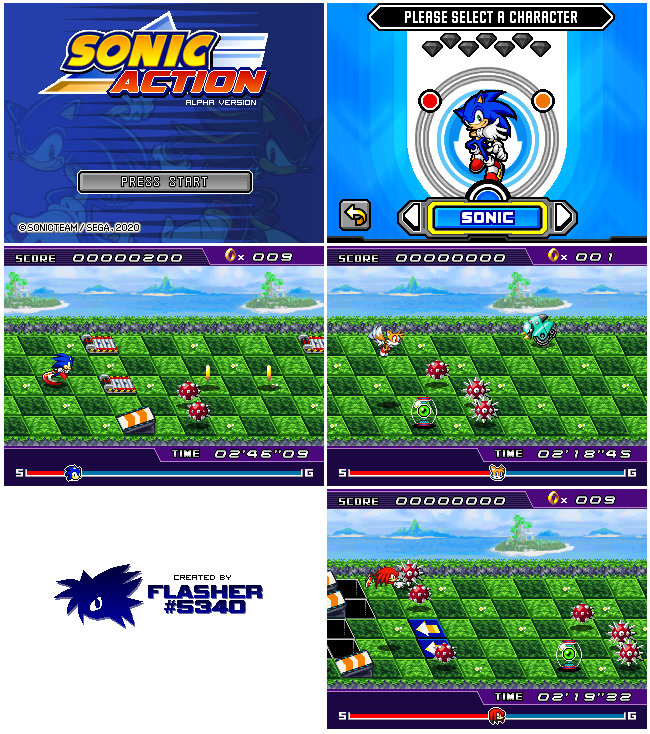 Sonic Action is a remake of Shadow Shoot, an old game made for mobile phones with Java system, the game was part of Sonic Cafe service offered by Sega.

This fan game is a mini-game where you will have to dodge obstacles, collect rings and defeat enemies as you progress to the end of level, and will have many characters divided into four types: Speed, Fly, Power and Shooter.


• Speed:
Characters of this type can perform Spin Jump and Spin when touching a Dash Panels destroying enemies front of them.

• Fly:
They can fly over obstacles, but they totally vulnerable in air and ground.

• Power:
They can glide over obstacles and destroy enemies while glide, when touching on the ground will automatically use Spin to gain a small boost e and destroying enemies front of them.

• Shooter:
Characters of this type have gameplay similar to Shadow Shoot. They can't jump, but can simply shoot projectiles at cost of Rings and destroy enemies and obstacles while running after passing through a Dash Panels.

NOTE: This game supports only keyboard until now.


This game still in development and does not represent the Final Version.

MediaFire is a simple to use free service that lets you put all your photos, documents, music, and video in a single place so you can access them anywhere and share them everywhere.
www.mediafire.com

I finally beat it with more than 100 rings, I got 104 rings. This is really good, but there are other things that could improve this. Like maybe just more movement options, more pathways to get more rings maybe, or making killing badnicks more centralizing. Just speculation though, I don't know if these things would improve the game, just speculating that it might.


Alright main improvements would to implement a resolution select and have a better fullscreen mode. (Currently it seems to change my entire computer's resolution while i'm playing or something? i dont know.)
I'd also like to be able to cancel flight or glide because I kinda feel Sonic is the best for collecting rings or even killing enemies since he can time jumps... though busting badnicks doesnt seem to be an important part of this game as of yet.

Maybe be able to jump during speed boosts and move more during ramps to avoid running into something, or a roll button? speculation
Last edited: Sep 23, 2020
Thanks for suggestions! I released this Alpha too soon and forgot basic things like control and resolution options.
I'm sorry for that hehe

About build in development: 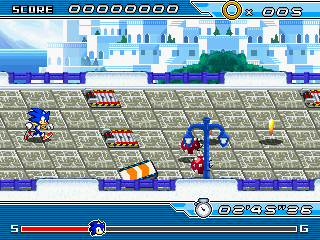 * I made gameplay as similar to Shadow Shoot, now all characters execute Spin when passing through a Dash Panel;

* Combo system has been implemented, you will have take advantage of your speed boost to destroy badniks, increase your combo, resulting in a higher score;

* Resolution options was implemented in game;

* Fly and Glide are now executed pressing Jump Button during the jump.(after executing them, it cannot be canceled);

* Ramps will now have the same function as Shadow Shoot ramps;
The reason why i thought like move during ramps and jump during boosters was because sometimes they're placed right before a hazard tho thats probably just level design or "a trap"
Just like in Shadow Shoot, when going through a ramp or dash panel, you will be in attack mode, being able to destroy any obstacle ahead.
Can't get through the menus for some reason, I can press enter to get past the title screen but Idk what to press to get to the gameplay.
You must log in or register to reply here.