Welcome to the Sondro Gomez: A Wonderworld Story page!

Created by Shane "Sparks," Sondro Gomez: A Wonderworld Story is a prequel mini-game that takes place a few years before the events of Kyle & Lucy: Wonderworld. In Kyle & Lucy, players learned a bit about the wish-granting Mystic Orbs that fall from the sky, but why are Maximus and Gresley out to find the new season of Mystic Orbs? What happened to the Orbs of previous seasons? Sondro Gomez knows what, and he might know more than he should...

Development wise, fret not, as Kyle & Lucy: Wonderworld is continuing development behind the scenes as we prepare a second Kyle & Lucy demo with bigger changes and some exciting surprises, too. Sondro Gomez is a re-tooling of an older project that had enough resources and assets that the development team decided it would be a suitable "appetizer" for people waiting on more news about the ever-growing Wonderworld story (think along the lines of Bloodstained: Curse of the Moon in relation to Bloodstained: Ritual of the Night, except this is canon).

In fact, Sondro was planned to be in the SAGE 2018 demo of Kyle & Lucy, but complications arose. To make it up, we're giving SAGEXPO three times the amount of levels we originally were going to have in Sondro's demo!

The core of Sondro Gomez's gameplay was originally conceived to be an authentic feeling NES-style game, in a market that's flooded by games that don't fully capture the quirks and limitations of the NES days. In doing this, the Kyle & Lucy dev team has been able to flex some creativity through limitation, and try out a gameplay style other than Sonic-inspired for a change, and we hope everyone at SAGEXPO enjoys the variety as much as we did making it!

(There's some twisted humor in bringing a NES-style game to a Genesis themed event, isn't there?)

The SAGE 2018 demo of Kyle & Lucy: Wonderworld is still download-able at its archived booth, here. 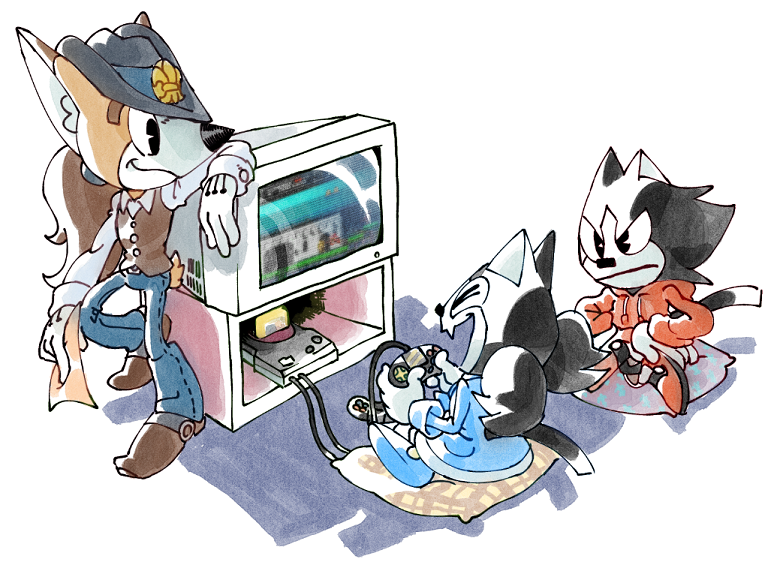 In the demo, you have 3 stages to play. These are the first three stages you go through in Sondro Gomez: A Wonderworld Story. 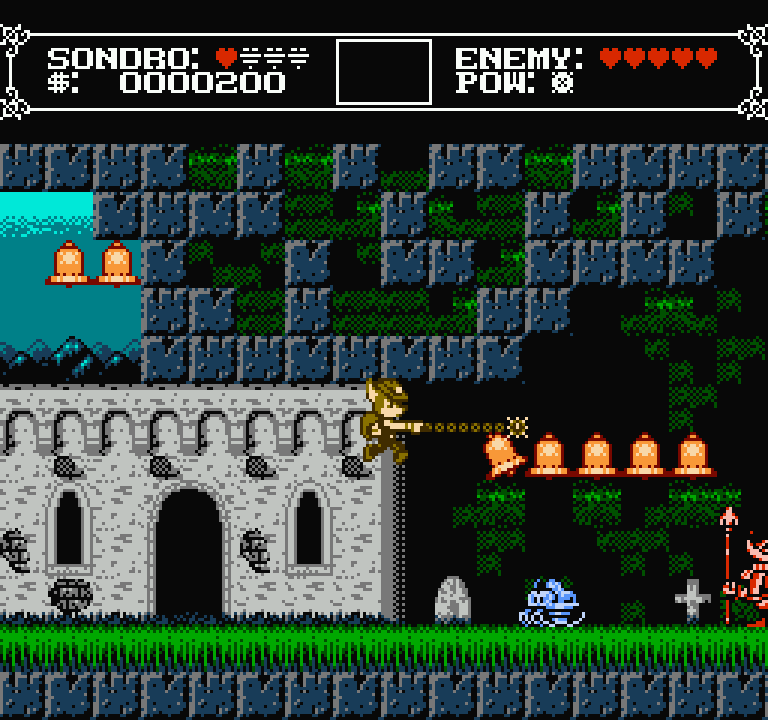 Nestled near the Brass Valley ruins, is an old village; its recently been taken over by a conflict between Gresley's robots and Maximus' knights, so take caution. 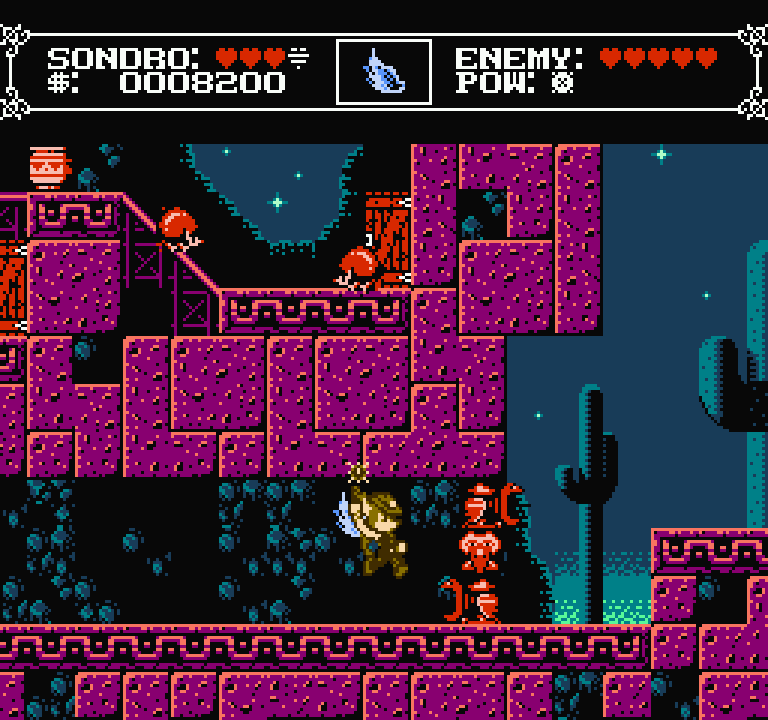 These tetrahedron tunnels are filled with conveyor belts that'll try to trick you off the stage. Maximus' party went this way, perhaps there's an Orb in the mines? 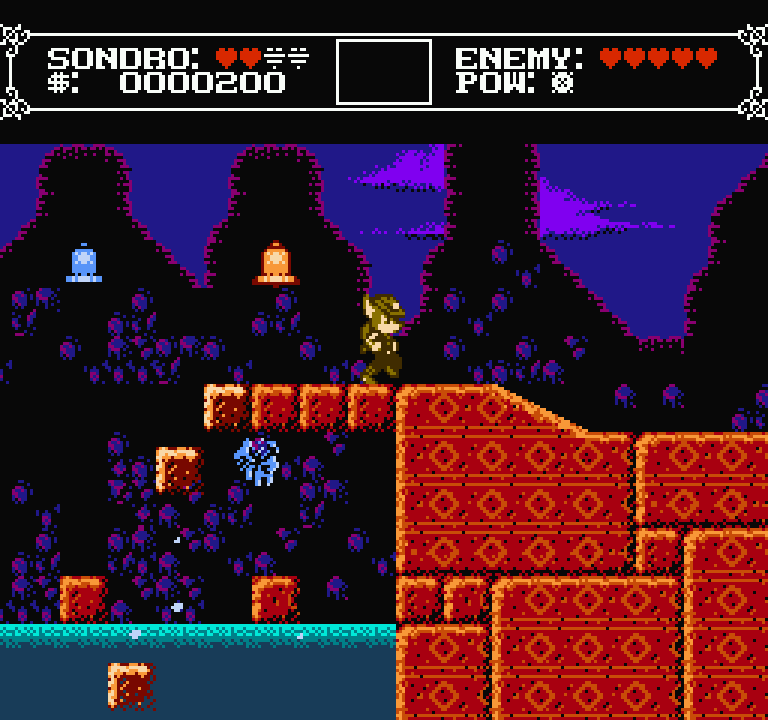 Gresley's party ventured off into the canyons in search of an Orb, which are overflowing with a surge from heavy rains. Watch out for the collapsing bridges!

Controls:
Sondro Gomez can perform all the actions you'd expect; walking, jumping, ducking, etc. Sondro's special attack however is his barbed-wire lasso, which is specially equipped with a spiked mace for combat.

By pressing B, you can launch it at enemies and bells.

Sondro can also attack while jumping and ducking down.

By holding B, you can "charge" Sondro's lasso for a longer and stronger attack!

Sondro can also attack vertically, depending on what direction of the D-pad you use.

This applies to mid air jumping as well.​

Synopsis:
In Wonderworld, shooting stars that do not get wished upon fall to the planet as crystalized "Mystic Orbs." Seasonally, these tend to fall from the sky every other Spring or Autumn. These are often sought after for their raw wishing power, though the last few seasons have yielded very few Mystic Orbs, leading to a shortage all around Sunova.

Sondro Gomez, a local living on his own in Sunova near the Brass Valley, has found himself in a bit of a predicament; his dreams of starting a career as a musician has not gone well. As a result of his gigs not paying off, Sondro has accumulated a very high debt to the Masked Man, his realtor. The Masked Man however has made a bargain with Sondro; if he can retrieve all of the Mystic Orbs remaining in the region, he'll accrue the interest on Sondro's debt.

Yielding only a barbed-wire lasso, Sondro heads off into the wild regions of Sunova to find gold to pay off his debt, and seek the Mystic Orbs along the way. However, he's definitely not the only one seeking the Mystic Orbs...

How does all this tie in to Kyle & Lucy: Wonderworld? How will the events here affect Kyle & Lucys big adventure? Guess you'll have to stay tuned to find out!

Enemies:
Gresley and Maximus have a much smaller army at this point in time, but they still got some goons trooping around. Wildlife also is a threat to Sondros journey.

Mook Knight
Maximus' front-line soldiers; they aren't the most clever fellows around, but they are fast!

Totem
These towering figures guard over the area, shooting fireballs at you, which do bounce!

Dillo
These little critters generally mind their own business, but it can be fun to whack one and send it rolling across the stage.

Bomb Dillo
These Dillos live in vases, and tend to come out when intruders are in their area. Watch out when hitting them too, they roll up into explosive bombs!

Fire Beetle
These big bugs climb up and down ladders, leaving a flaming trail wherever they go. If they see Sondro on their ladder, they'll speed up their climb!

Ghost Piranha
These pesky fish jump in and out of water surfaces, making journeying near the water difficult.

Collectibles:
Throughout Sondro Gomez, the player has to collect money in order for Sondro to pay off his debt. However, if you end up falling off the stage or defeated by an enemy, there's a $5,000 penalty to continue.

Bell Capsules
Items of all sorts can be found inside of bells in Sunova. This region of Sunova has slightly different-looking bells than the more-known Mystic Garden area. Perhaps you'll see both at some point?

Cherries
The most common health-providing fruit in Sunova! They refresh your health bar certain degrees, depending how many cherries are on a branch.

Coins
Your standard and cheapest collectible. I don't think Sondro will pay off his debt easily with these.

Money Bags
Why someone would leave this out in the open in a bell, who knows, but more money to Sondro.

Jewels
Jewels come in small and large sizes, with the former being more valuable than the latter. These have the biggest price tag, and thus are the most highly sought-after item.

Save Points
Hit these faux-orbs to save your level progress.

Mystic Orbs
These gems sport a fancy fleur-de-lis, and are full of wishing power. They seem kind of important; Sondro had to get these to accrue his debt or something, right?

Power Ups:
Sondro has access to a collection of power ups that can enhance his ability to find secret paths and trek the region.

Wall Claw
This strange glove give Sondro a strong pair of claws to grab onto walls with. Use the D-pad up against a wall and press A to grab onto it. You can jump off the wall to wall-jump; simply use the D-pad to secure your direction.

Big Boot
Press A while mid-air to slam onto the ground with a sudden pound of this magic boot. It can break certain floor blocks, as well as K.O. certain pesky enemies, such as Totems.
​ 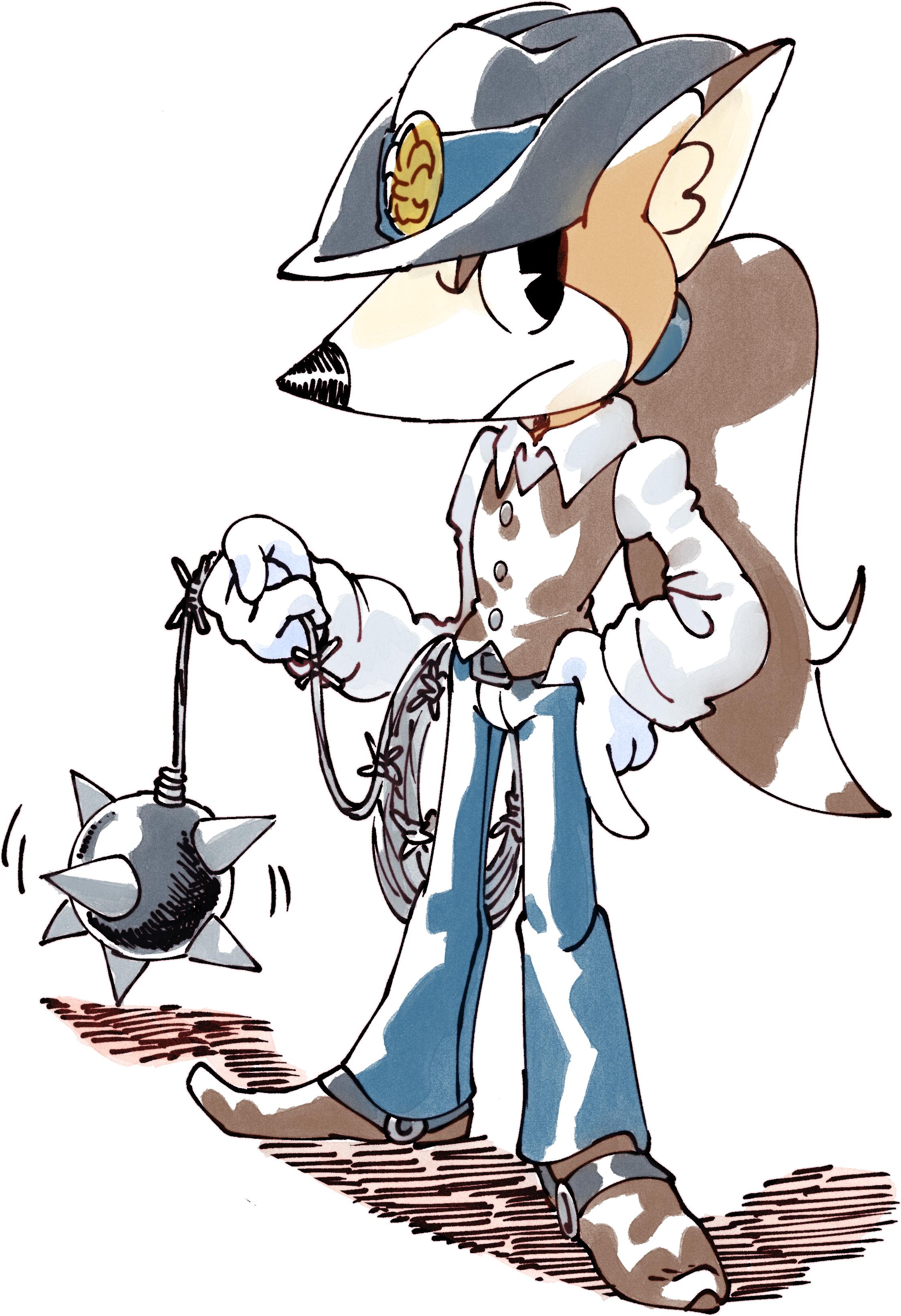 This game is beautiful and perfectly captures that classic NES feel. The sprite of the main character is particularly impressive looking, but every piece of art is great here, including the backgrounds.

The controls are very tight and the platforming and gameplay are very fun, with thoughtfully designed levels, cool secrets, and fun power ups to boot! I kept collecting points from bell drops without really understanding why I was doing it, just because the feedback and sound effect was so satisfying.

The only point of improvement I would suggest here would be to add some more transition between levels, maybe some cinematic story pieces, maybe a worldmap, maybe add some bosses? Basically just flesh it out, but for a first demo this is incredibly polished and I enjoyed it quite a bit. I am excited to see more.
Last edited: Aug 30, 2020
It's a pretty fun spin on the Castlevania formula, honestly! Yet to try the main project though, and I'll likely wait until the next demo's release just so I can experience it raw~

High Points:
-Controls really well and has a good set of challenges associated with it~
-Great soundtrack~ You definitely keep within the NES barrier and bring out its nuances to the fullest~
Tripping Point:
-...so I found a softlock during the third stage where falling through a ladder transition point instead of gripping the ladder(maybe I accidentally input up to grip the ladder as the transition went? I don't know...) causes not only a lack of transition but also a lack of control thereafter. Had to reset the entire game, since even the pause button wouldn't work. Of course I end up finding the weird bugs~ : |

Mixed Nuts:
-(maybe) Funny note, I had a time and a half setting up my controller for the game. For whatever reason, it wouldn't save my controls no matter how many times I tried. I was going to make a snide joke about how I had to play the game with the controller in my lap, with a finger apiece for the Square and Circle buttons on my PS4 controller(and another about the lack of music)... but it turned out the issue was that my copy of 7-Zip didn't remove the Data folder from the Zip File, which is where the file for the controls is saved. As is standard when I play games, and in reference to another name I use, I become Soudumm as opposed to Souget~ XD
Read more…