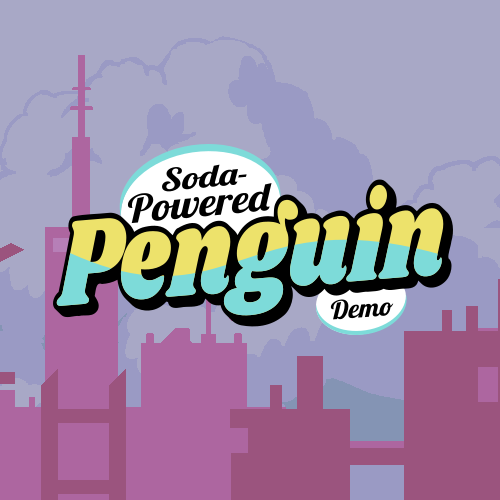 Soda-Powered Penguin is a fast-paced, momentum-driven precision platformer featuring a destructive penguin strapped to a soda bottle. The soda bottle enables dashes, double jumps, and generally lots of speed- all of which is used to conquer hand-crafted challenges.

This demo includes...
This is the first public playable demo, so a lot of things are subject to change.
Bug reports and suggestions are highly appreciated! Send them over on the Discord!


If you enjoyed this demo, here are some ways you can follow & support the project:

I'm not gonna lie, I tried this game purely for the penguin, I love it! Its animations are just top-notch.
I had a ton of fun with this demo, the gameplay is amazing, the penguin is adorable and those levels were so good ! It's a really simple concept, and yet I never felt bored while playing it and got through it all in one go. It's fast, responsive, intuitive and deep enough to feel your progress in its mechanics.
The music in itself is good too, but maybe it's a bit too chill for its levels ? (it's perfect for the HUB) I had the most fun when I tried to advance as fast as possible but the music didn't feel quite as driving as it should, maybe that's the point ? I dunno.
Anyway, so far this is my favourite game of this Expo.
Reactions: Domo Yoro
For most SAGE entries, I was way too lazy to review them at all, and honestly I feel the same about writing a detailed review of this game, but I decided to gather all my strengths to tell you guys that what you're doing is absolutely phenomenal and I think you guys have a beautiful future ahead of you.
I have only one single complaint: the time limit to get the last bottle cap in the second level feels way too strict, I have no idea of how you're supposed to do it. But I admit I haven't got that bottle cap yet and I probably just need to git gud. So yeah, besides that, no complaints at all, everything about this game is amazing!
Reactions: Domo Yoro
This is one of my favourite new fan games for SAGE! I came for the funny title but stayed because this concept works very well!

pros:
+incredibly polished controls
+I could play for hours
+clear indicators (sound and visual) to when I can soda dash again
+EXTREMELY FUN GAMEPLAY! (like celeste except kinder with an extra heart)
+sound effects are noticle but doesn't murder my ears haha.
+very easy to understand tutorial with controller support! (bonus points for mapping the dash button to the trigger buttons too! it made it easier for me to dash instead of using X on xbox one controller)
+BEYOND good level design + backgrounds to easily tell where I am.

cons:
-I don't know where the missing bottlecaps are (I am aware that you're supposed to look for them by yourself but maybe a hint after stage completion would be nice. such as: before you enter in a door and it tells you where you want to go, it shows the places where the missing bottle caps are
(e.g.
=downhill (2 left)
=uphill (all caps found))
-that's really it so far

the last bottle cap on the 2nd level is a true test of all the mechanics I've learned while playing this game which I wished more video games did.
please continue working on this because this has such potential to be very successful.
Reactions: Domo Yoro and etuevetuevetuev

Domo Yoro
Thank you for playing, I'm glad you super-enjoyed it!! I put a lot of love and care into the polish over the past few months.

As for finding the missing bottlecaps: I did plan on separating out the bottlecap list for each subsection of the level, but unfortunately I didn't have time to implement that for SAGE. But it'll definitely be in the full game!
Read more…

Wow, what a fantastic game! First of all, the premise... a soda-powered penguin, that's something that can catch the eye of everyone! Beautifully stylised, every visual element gels together perfectly well which is really hard to achieve in visual design. More importantly though, the game is insanely fun to play! The momentum physics are absolutely spot-on and the mechanics of the game are an absolute joy. It is simply so satisfying to pop a balloon and fly up while the plastic remnants fly across, the controller rumbles and the penguin spirals upward ready to smoothly move into another maneouvre. This game absolutely nails controls and is one of the most fun games physics-wise that I've played in a long, long time.

Played it on Steam Deck and it worked perfectly, just ran it under Proton as it's a Windows game. Game recognises controllers and even more unconventional control types like trackpads! There's just so much attention to detail, when boosting past grass/plants in the background they even react to the penguin blasting by. I can imagine this game doing very well on the market and I look forward to the day I can play the full game, this dev has given us a treat of a demo! Amazing work!
Oh this feels really good! I'm not a big fan of hub worlds, even when they use the same game code as the ordinary levels, but everything else was really nice. The Celeste similarities are obvious but I think this is also my favorite take on the fast loopy running from games like The King's Bird. Secret foreground walls fading away as you pass through them is always tantalizing. I don't think I totally understand the health system--sometimes I'd die after hitting spikes, sometimes not?--but otherwise the movement and puzzles and so on are a real treat to play.

Violet CLM said:
Oh this feels really good! I'm not a big fan of hub worlds, even when they use the same game code as the ordinary levels, but everything else was really nice. The Celeste similarities are obvious but I think this is also my favorite take on the fast loopy running from games like The King's Bird. Secret foreground walls fading away as you pass through them is always tantalizing. I don't think I totally understand the health system--sometimes I'd die after hitting spikes, sometimes not?--but otherwise the movement and puzzles and so on are a real treat to play.
Click to expand...

I'm glad you enjoyed the movement! And yeah, I do recognize that hub levels aren't necessarily for everyone; I plan on adding fast travel to the hub to help smooth things over. (But you'll probably have to discover the levels on your own, first!)

Admittedly, the way that the health system works is a little obfuscated by some overlapping mechanics, but here's the core idea:
After you hit spikes, you're in a vulnerable state; if you hit spikes again when vulnerable, you'll be sent back to the checkpoint. If you manage to land on safe ground when vulnerable, you'll "heal" and exit the vulnerable state. Of course, some hazards in the demo are one-hit deals; this is usually to avoid the frustration of being unable to recover. For example, the first iteration of the icicles would just constantly push you into pits and other hazards, which was annoying in playtesting. Making them insta-kill solved this problem!
I overlooked this game at first (probably because of it's very basic graphics), but Violet threw a little recommendation. I'm really liking the movement and level design. There's flow, but also a challenge which is a difficult balance to strike. But, I feel it could do with some QoL enhancements such as;

Health in the HUD - It's...really obtuse to understand at the moment. Having some graphics in the corner of the screen may help explain it better.
A map system - I have poopy working memory, but it would also help a ton with exploring for bottlecaps and gaining a sense of progression, along showing where these labelled checkpoints actually are.
Jump charge in the HUD - This one I don't feel too strongly about since the sound and visual cue is there. But with such a low res sprite and a somewhat quiet, not-so-distinctive sound, it's a little hard to notice until you condition the effort to seek it. Maybe just making the sound and visual "pop" out a little more will do the job.

I look forward to seeing more progress!
Your game controls wonderfully, and you have nice, snappy menus, with accessibility features to boot!
(A good chunk of projects this year did not have fully functioning menus, so props to you.)

I'd like to make mention of a few things:
- Is it possible to allow bouncing off balloons by pressing jump when adjacent to one? For me, having to dash into them, and readjusting my trajectory afterwards, was a bit more finicky then I would of liked
- The "get to the key room challenge" was fun, but a much too challenging, at least for me. I ended up having to slow the game down, and still only barely got by on 0 seconds. May I ask if the extra time gained when grabbing the key goes up by a minute or two? (This may or may not entail other timer-based challenges, if you plan for more.)
- Bottlecaps bring a great incentive to test yourself on more difficult platforming sequences, but there were times (2nd level mostly) where I was just trying to find where they were.
- There were also times where Pepsi Pengu was ground dashing in one direction (let's say going right), and even when I was pressing dash and left, Pengu continued to go right. I'm probably missing something, but u-turning proved hard to do at times

Thank you very much for the demo! It's one of the best I've played this year.
Cheers
You must log in or register to reply here.