DEMO 4
First zone are now finished but there something bit different. 2 killer machine.. per act.
That's Right. now Newtrogic Panic have 4 bosses or 4 more per zone. you could call this a big boss rush.
note : this is early SAGE2020 demo , so everything you'll see in this demo might not same to the Upcoming Sage2020 Demo

Note for potential outside readers: The previous SAGE 2019 build on this page has since been replaced with a newer Pre-SAGE 2020 demo at the time I'm writing, so you will notice me describing elements not present on the other reviews on this page.

This fan game has no doubt gotten a lot better since the SAGE 2019 demo with the sprite art no longer suffering with an obnoxious use of bevelling, the level design now being more cohesive and the general presentation now being more flashy akin to arcade games including usage of 3D models (which I didn't even think were possible in Clickteam Fusion). However when it came to gameplay I had some problems which I'll go over here.

First problem I encountered was with the controller and keyboard bindings as they were both inconsistent. When I first loaded up the game and couldn't get past the disclaimer screen on my controller, it gave me the impression of this game not having controller support but then when I got to the game with the keyboard, suddenly the keyboard doesn't work and I have to use my controller to play. It doesn't even stop there as even the bindings on the controller changed between different parts of the game that I'll list here:
- Disclaimer screen and skipping the intro require you to press Enter on the keyboard
- Any button except start on the controller is accepted on the title screen
- (On an Xbox controller) The left analogue stick and the X button are used to navigate and select in the menus
- The cutscene with Eggman and Metal Sonic can't be skipped at all on either controller or Keyboard
- Keyboard loses all bindings in-game and now the D-Pad can be used with the A button to jump, the Y button to cancel the Spindash and the X button to switch between 4 slots that I've yet to figure out what they do
This game could really benefit with some of universal binding system (for lack of better terms) along with button customisation options so that people don't have to either switch between devices or be stuck being unable to play the game at all because they don't have a controller on standby.

Second problem was with Sonic's physics, or rather the running physics to be precise. Sonic's control for the most part is a decent approximation of the Sonic Mania physics until you come across loops or slopes as simply running on them loses all speed immediately even with a decent run up or being launched by a red spring. As a result it becomes required to either roll or use the spindash/peel out on even the most simple of loops to progress:

​
Last time I checked the framework used here isn't based on Forces Classic Sonic so I shouldn't be struggling to do a simple task from 1991.

Third problem came with the bosses as while they do have clear telegraphs for what attack they're gonna do, the fast attack speed for 3 of the 4 bosses did make dodging more difficult than I think they need to be for the first zone's bosses. The second Act 1 boss in particular had really fast missiles that practically required me to memorise the timing off in order to get them to hit the ship. If I jumped any 1-2 frames before they come on screen would result in them being in the air and not where I wanted them to be.

As for a bug report I did notice that if I loaded the first act after finishing the demo, Sonic would phase through the floor and die instantly causing me to restart the game. The other 2 bugs involved the score tally not loading up correctly and getting hit on the rising ship making Sonic fall to his death: 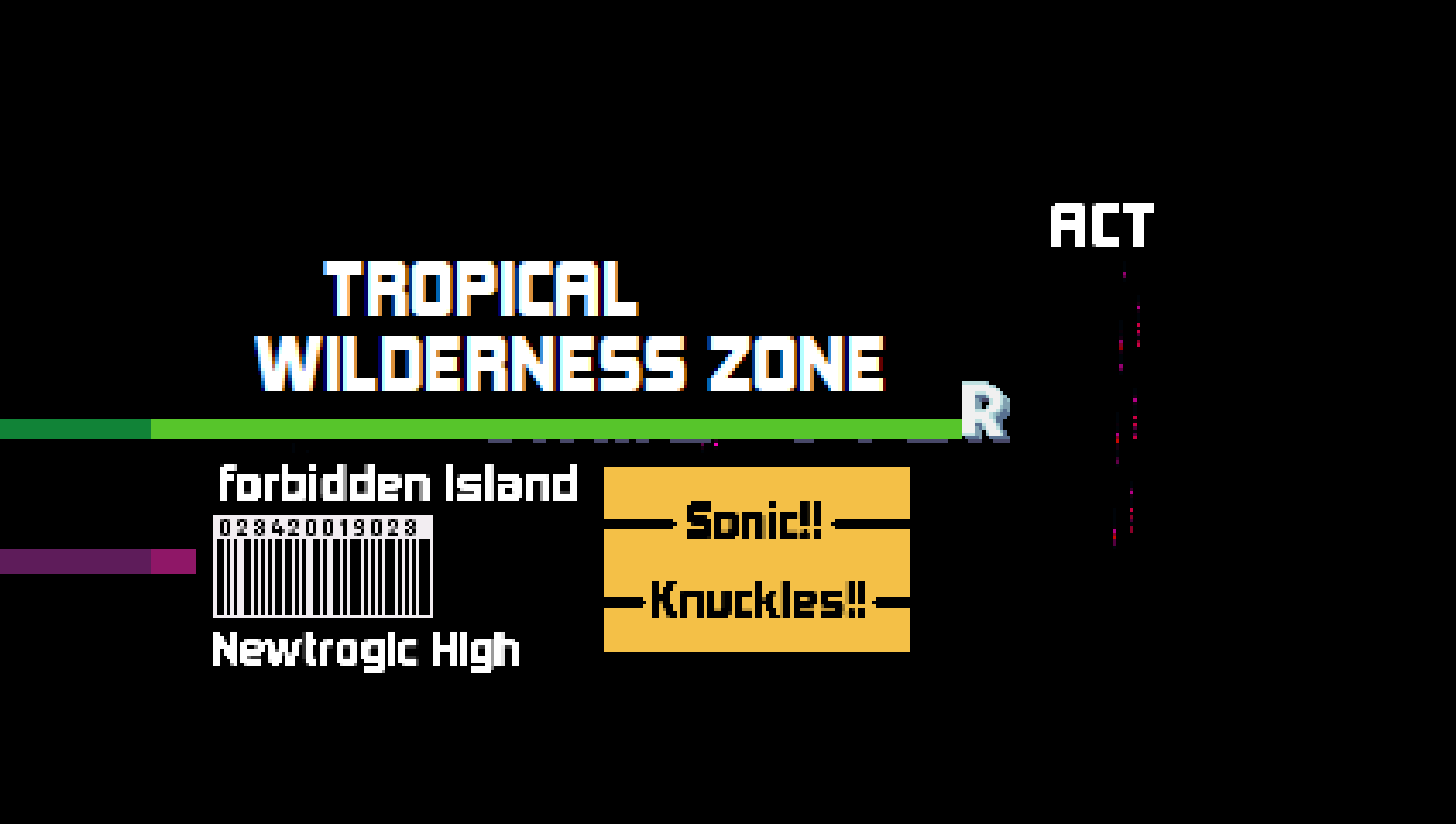 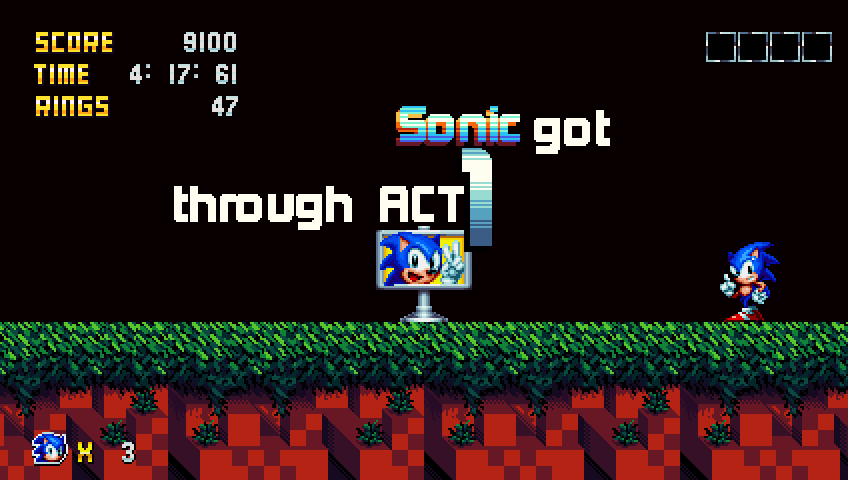 While this review has 3 stars on it, I do think this game has got potential to be great if some of the problems were ironed out and like I said before it's significantly better than the SAGE 2019 demo, so don't let the review score detract from keeping a close eye on the project. It's still an enjoyable demo, there were just some factors that prevented me from giving it the "Good" rating.

SonicG502
I like this fan game very much!! Like a lot....and it got really insane before every boss fight....my only problem is the jumping...Sonic feels kinda heavy...on the first boss I can barely hit the robot....

JunioSonicMan
I think complaining about not being able to skip the first cut scene is really dumb. considering it is 3 seconds. also the four slots I think are suppose to hold shields but he hasn't been implemented yet (who knows). the boss attack speed is just fine. there super easy to defeat too and if they were made slower it just make the bosses a cake walk. I think that one is just on you for not being good. the only things I really agree with are the keyboard and controller bug and Sonic feeling really heavy and the rising ship bug. I think the 3 stars you gave the demo is way too harsh considering the stuff mentioned.
Honestly, this fan-game is fun and definitely has some neat and interesting ideas. Of course, as some people have already pointed out, there's some unfair level design (such as springs that send you into enemies. Don't do that, pretty annoying). This fan-game can be a bit difficult, and the saws have a broken hitbox. You kinda need to fix it. Also, I'm not a big fan of the sprites for this fan-game for sonic and knuckles and the enemies. I'm ok with you editing the sprites from their originals, but the bevel effect isn't a good effect to use on them.
My main problem with the enemies is that they look out of place. All of the other sprites in the area are defined, but the enemy's sprite is blurry, undefined, and not fixed which is what makes it out of place.
Lastly, I think the explosion effects are overused here, and I think they need to be toned down a bit.

With all that in mind though, I'm still able to have fun in this, but it's not perfect and needs work. I hope this review helps.
Reactions: RaphaelZX
S&K Newtrogic Panic can become one of the best fan games along with Sonic Time Twisted and Sonic XG.

Some problems make this a imperfect thing examples are sonic sprite colors, some bugs with Knuckles, level desing very awkward but is not a mess and changes can make this a great demo and congratulations for making this.

Revamped All stuff . . . that is.
new demo where download? im android

Sorry , there's no mobile port. only on PC
[QUOTE =“ Tyson Tay，sc评论：1095，成员：3884”]对不起，没有移动端口。仅在PC [/ QUOTE]上
哦...:'(
um im just wondering can you send me an mfa file of the core engine plain i need it for my game reply soon with the clickteam file thanks
You must log in or register to reply here.