Since the original demo by FullHitPoints was lost,i remade it.
It's under completed fangames,because i wont add more stuff,making it into a "long and complete" game,and It's a fangame of ristar.
So yeah,Original Idea and Demo by FullHitPoints. 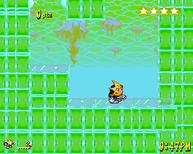 Hey man, this is a really great and interesting project, I've been wanting to make a sequel like this one for a while. I was wondering if you knew what tools or programs that would be needed in order to make something such as this. Thanks!
looking forward to seeing more about this.

game feels very close to original Ristar, minus a few things that could be adjusted. but i believe the author knows what he's doing.
Read more…

1. not sure if it was personal preference, but his basic movement speed seems around 1.5x faster than normal. that's not really a bad thing i understand.

2. well there's also the missing a goal to end the stage, but that's pretty obvious. probably would've been nice to just put a goal at the end there for now temporarily just to close the stage up.

here's some constructive comments below.

1. water movement needs adjustment in;
swim speed from fast movement to standard movement snaps, it would be good to add some acceleration and deceleration to the swim.

2. rotating in water, i feel like it might be good to let the character rotate better without moving around so much, this might get fixed automatically with adding acceleration, deceleration to the regular move speed. not sure.

3. sometimes colliding to a wall can make sonic stick instead of keep sliding off.


that's the only stuff i saw off the top of my head that i think could use work. hopefully this comment can be found as useful.

i really like what you have been doing so far so i'm looking forward to seeing more. also pretty curious on how you managed to get his hands to work like it does in genesis lol
it show the time. cool
You must log in or register to reply here.