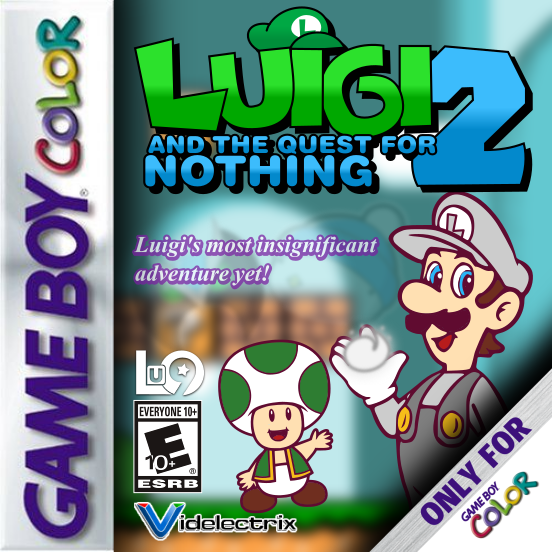 Luigi and the Quest for Nothing 2 is the direct sequel to the award winning* fangame, in development since 2014.

Game History (if you care about that)

The first game, made to coincide with "The Year of Luigi" had a simple goal - to create a silly game in the style of the original Super Mario Bros., with references to obscure games here and there, including the soundtrack, which was fully arranged by me.
A "director's cut" version had been released in 2017, redoing the soundtrack entirely and changing other things to make it more accurate to the NES limitations, and fixing other issues the game had.
In 2014 I started working on the sequel not knowing how big it was actually going to get, but I settled to make another platform, this time in a graphical style inbetween that of Super Mario Bros. 3 and Super Mario World, scaled down to the Game Boy Color's limitations, as a large part of my childhood had been emulating several obscure games on the platform, both good and bad. So I ended up giving the game several aesthetics and references from those games, as I already had in the previous game, but took it a step further, to make the game feel like it belonged in the GBC, as much as I could with Game Maker anyway.
Development started with the 7th Mario engine by Gate of Green Baron Games, formerly known as DeeY, CatezeeY and other names, on Game Maker 8. At this point in time I had already decided the game would have roughly 5 "worlds", and decided on how exactly it would end. I would even hint at a possible 3rd installment... but not directly related to Luigi and the other two games. That idea is still not completely scrapped, but is unlikely that it will ever see the light of day.
A couple years passed, and I was still developing the game (and arranging AND re-arranging music, the more I figured out how sounds from the Game Boy sound chip SHOULD sound like, its limitations and whatnot, though this time around I was using some music just taken directly from those same obscure GBC games I've mentioned before) and I had a slightly outdated copy of the source code on the cloud. But one fateful day in 2016, my external hard drive, who I bought, ironically enough, to backup important things, such as the game, was acting up due to a faulty cable... it would still work, until the day it stopped, and even caused my entire Windows installation to just... not work anymore. So a few weeks stranded on the islands of Linux, I still couldn't get the external hard drive to work again, a new cable couldn't fix it. Nor data recovery tools. And to this day nothing that I've tried could bring it back to life... not everything in there was important, but progress on the game was there, and it was lost. All I had was my backup in the cloud, which wasn't the most up to date thing, but it was better than having no game at all.
Before trying to regain the lost progress though, I've decided to attempt something many would consider to be lunacy: to port over the game's code, from the outdated Game Maker 8, to the newer Game Maker Studio 1.4.
I was already familiar with it, but porting the game over meant having to replace a lot of now obsolete functions, and, possibly the worst thing - initializing uninitialized variables, for you see, we users of the classic Game Maker loved one very convenient feature that enabled a very bad coding habit for many - treating unknown local variables as zero... and the game's engine was full of them. It probably still has one or two of that in the code to this very day, but I managed to fix all of that... which came with other issues too, but those were eventually also taken care of. Fixing those issues and even other issues I had even in the Game Maker 8 version motivated me to continue work on the game, and eventually I added back some of the progress I lost. But one other thing was lost along with the source - my exact ideas for the ending, potential bosses and levels, and just some ideas in general. But... they probably weren't that great anyway. The original ending would've had Luigi retrieving the Nothing, and going back to Mario, who'd just facepalm to this whole thing, and... hang Luigi in a clothesline saying "you don't move from here until I come back" or something like that, for some reason. But Luigi deserves to shine, and so not too long ago I have decided to take the story into a completely different direction, since the original game was already a silly game with crossover characters added in for no reason, I think it wouldn't be bad if we went all out with the crossover aspect and make it a part of the plot. It still is a silly fangame at the end of the day. And in the last demo I teased this aspect a bit. The same will apply for this demo, which by the way, the game has once again been ported over to a newer version of GameMaker, this time, the latest one - the 2.3 series, and as a result I can now visually make cutscenes other than just programming them by using the new sequences feature. Pretty neat.
And of course, the transition process was much smoother, straightforward and less problematic than the transition from GM8 to any version of GMS, so it wasn't much of an issue.
*"Game Of The Month" award on the Mario Fan Games Galaxy website.

Plot
After the events of Luigi and the Quest for Nothing, a mysterious figure snags the Nothing away from Luigi. I think he didn't like that. So off he went again to find this figure, along with his friend, the Green Toad. But little did Luigi and this mysterious figure know of the importance of "The Nothing"... As you go through the worlds you will meet new unlikely allys, who will tell you about what exactly is happening in the world... or worlds... or universe?

Features
• Game Boy Color resolution and aesthetics
• Many elements from several Mario platformers new and old (and other platformers)
• Luigi and Green Toad as playable characters
• Explorable world map inspired by Super Mario 3D World (it was 2014, you know)
• "Spectral Flower" powerup, control fireball direction
• A selection of great chiptune from the GB/GBC library and exclusive arrangements by yours truly
• Various mini-games, with more to come
• Many secrets hidden in passwords
• "Super Game Boy" mode with border
• 2 Boss Battles (so far)

Known Issues
• Spinjumping in flying piranhas does not work
• Green Toad has glitchy mid-air spin animations
• "Cheat": Do a mid-air spin after stomping an enemy (without holding jump) to "fly"
• "Classic" bump sound does not play.
• Do not carry a veggie into a pipe.
• If you have a saved game from a previous demo it's probably better to erase it.
• If you experience anything weird with game saving please let me know.

Well uh... I didn't expect I'd like this game but here we are!
Good stuff I must say

pros;
-its fun to experiment with passwords and such, I am a little paranoid one of the passwords will jumpscare me tho
-wow you put minigames in this?
-there's popular mario/other game songs in there de-made to the gameboy instruments
-wall jump, spin jump, 'new super mario float jump' and enemy pull are interesting skills to combine together. All you need is a ground pound and you're set
-I was expecting a gameboy styled game with limited fps and graphics. Quite the opposite but still a little jarring to see some stuff I'm not used to in mario such as blocks being broken so smoothly
-with some levels, you can just runjump then spam 'new super mario float jump' and that's good for speedrunning

con;
-i can't believe you put that one game screen in this password screeen [that starts with a 7] and I didn't expect it. But beyond that, it was a crime i couldn't play 'that' game either.
-jumps are a little floaty.
-some sprites look out of place such as black bird, floating book. they have too much detail compared to other enemies
-some backgrounds are more shaded than others it's distracting
-i wanted to do luigi taunt but was greeted with this error message; 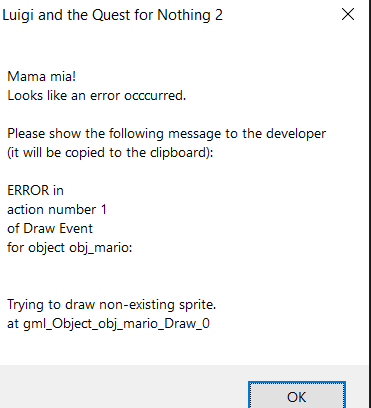 apart from that great job! I look forward to future development!
Fun and interesting Mario fangame!

ProfessorBadvibes
Got an error in level 2-3:

Lu9
yes, i am aware of it, it's in known issues, when you carry a vegetable into a pipe. hopefully i can fix it soon...
Read more…

I think I've encountered a problem. The run button makes you spinjump when you press it

LellyLL said:
I think I've encountered a problem. The run button makes you spinjump when you press it
Click to expand...

no plans for one, but if you know how gamemaker games usually work, you CAN get it running on android, but you'll still need a controller.

for the next update i'll at least include the linux runner in the zip.
You must log in or register to reply here.