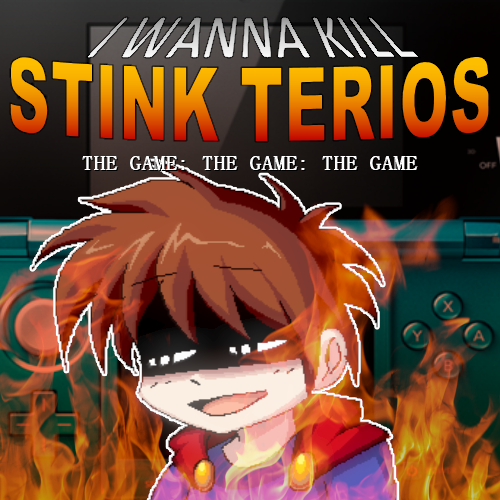 (SAGE 2020 demo)
I Wanna Kill Stink Terios
A Discord Server collaboration
Have you ever heard of I Wanna Be The Guy? If you've played it before, you'll have an easy time with this game, but if you haven't played, don't worry, this game is not going to pull up any of the trolls you'd expect, such as flying spikes and falling fruits!
I Wanna Kill Stink Terios is an IWBTG fangame based off the let's players Stink Terios and raocow!
This game is entirely focused on platforming skills, such as jumping, shooting and avoiding spikes, with a few puzzles here and there that are very simple and easy to figure out.

Stages:
This game is divided into stages inspired by games Stink Terios has played on his YouTube channel. Each stage has its own set of screens, each with its own setups! In every stage, there's a secret path that leads to secret area. Every secret area is inspired by games raocow has played.
​
STAGE 1 - Make a Good Mega Man Level 2
This stage is based on the entry "Spiky Situation" from MaGMML2. It is very basic and beginner friendly and serves as an introduction to what the rest of the game has to offer. It presents six screens with nothing but jumps over spikes (also known as needle) that get progressively more difficult. If you're very perceptive, you'll notice a secret path that will take you to the first secret area.

SECRET 1 - YUMP
This secret area is based on an infamous level from the Super Mario World hack YUMP, but is simply presented as YUMP 38. It's composed of a single screen that is strictly time limited and features an Eerie generator, but is significantly easier to go through in this game compared to its source material, as it doesn't share the same physics engine as Super Mario World and doesn't feature ice physics on its platforms.

BOSS 1 - Air Man
The unbeatable Air Man (except he's quite easy lol). This boss is very basic, but serves as an introduction to bullet avoidances, as it uses very simple RNG and has very short cycles.

STAGE 2 - Miner Ultra Adventures
This is where the game really starts! This stage starts spiking up the difficulty by having nine screens, adding slightly more challenging jumps and introducing a few puzzle elements and presents a combination of avoidance and platforming! The secret path is slightly more cryptic, but here's a hint: Always pay attention to spots free of spikes or walls! This time, the secret area is not going to be handed to you so easily, as you must prove what you've learned so far before reaching it!

SECRET 2 - Cat Planet/YUMP 2
Everybody cat planet tonight like it was $15,99! After going through an area that seems incredibly free, you must face a new gameplay gimmick, taken straight out of YUMP 2: You have to collect coins, but not let your coin counter reach a number that ends with zero! It might sound simple, but this gimmick will put your attention to the test, as you must think very carefully about the order of the coins you must collect, as the green ones are worth two coins.

BOSS 2 - Mineirinho
The protagonist of Miner Ultra Adventures himself with his full arsenal of wacky food! This boss is more challenging than Air Man, as he has multiple patterns that are randomly chosen by a roulette and you cannot attack him while he's performing any of the patterns. This boss will put your avoiding skills to the test, as your only opportunity to attack him is when he's choosing his attack!


Controls: ​
If you've ever played I Wanna Be The Guy (or any of its fangames), you know how this goes.
Left/Right Arrow Keys - Allow you to run as fast as the Kid can go!
Up Key - Allows you to read hint signs!
Shift Key - It makes you jump! Press it twice to double jump.
Z Key - Press this key to shoot!
R Key - Resets the game to the closest Save Block you've shot.
P Key - Pauses the game.
Backspace - Warps you back to the hub area.
F2 - Resets the entire game.
Esc - Closes the game.
Q Key - It is a mystery... 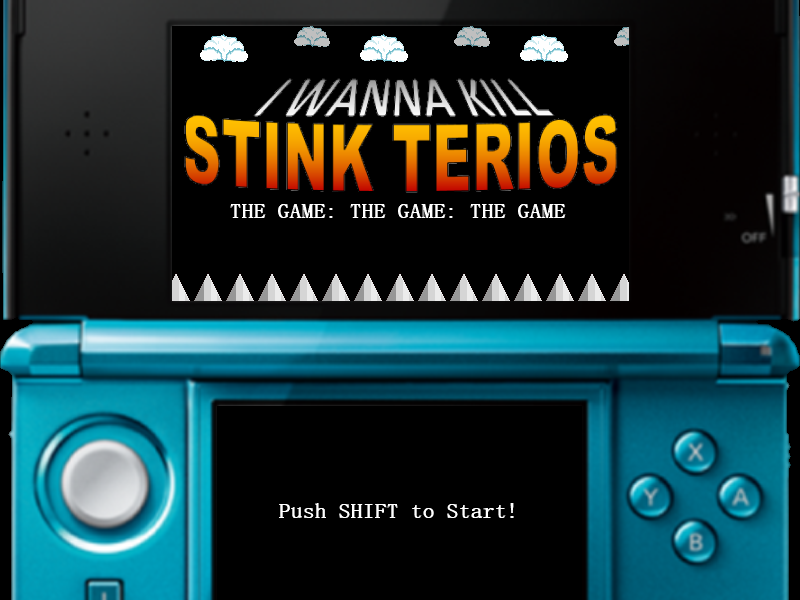 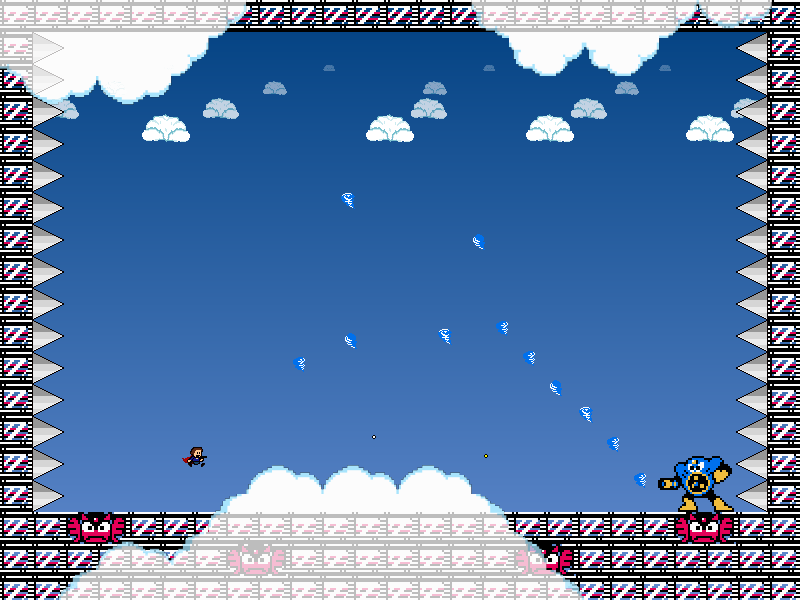 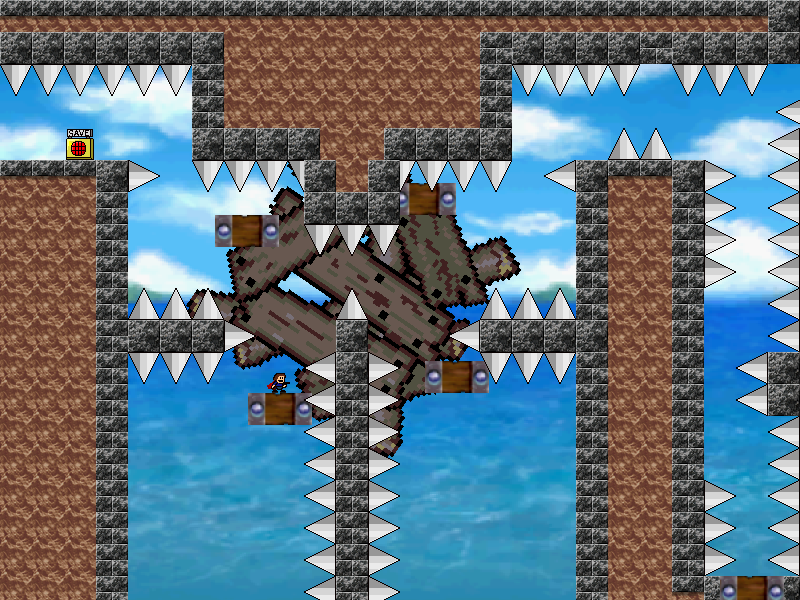 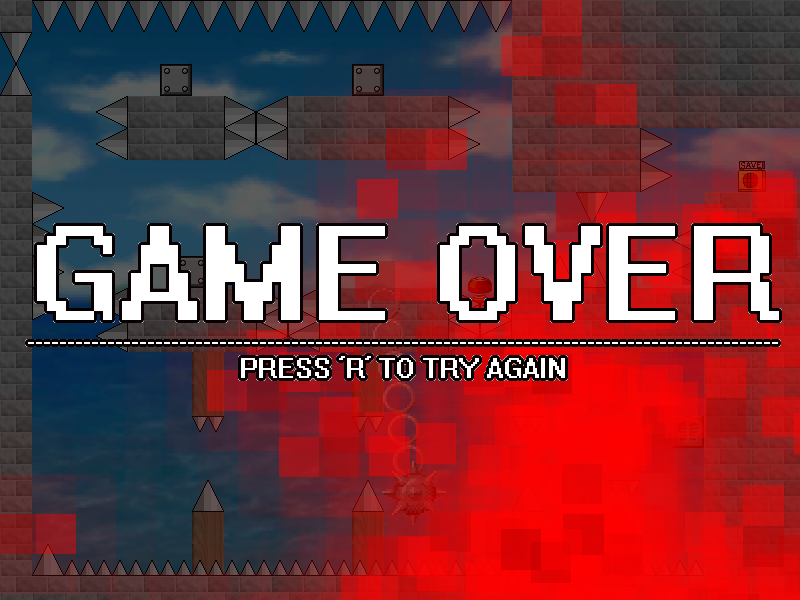