Havoc Fox is a 2D platformer inspired by the likes of Megaman ZX and Freedom Planet! Play as either Grey, a sword-wielding, visor-wearing fox, or Venice, a rabbit/dragon hybrid with a faithful (and dangerous) owl companion as you fight your way through the corrupted kingdom of Vanalia to stop its tyrannous king!

The game features fully voice-acted cutscenes and original music. Gameplay is subject to change, and some voice lines/ sound effects may be missing or incomplete! 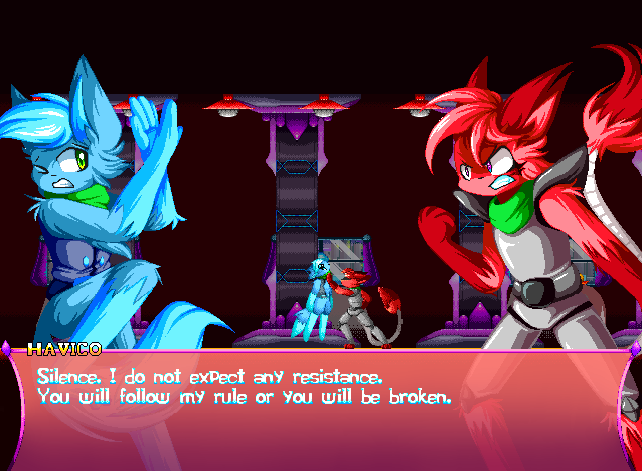 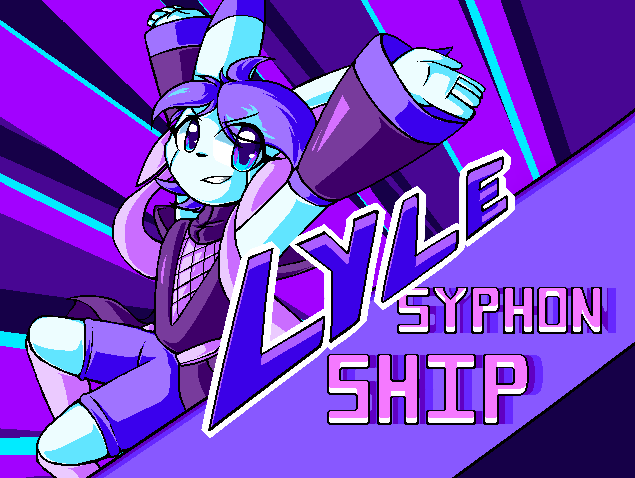 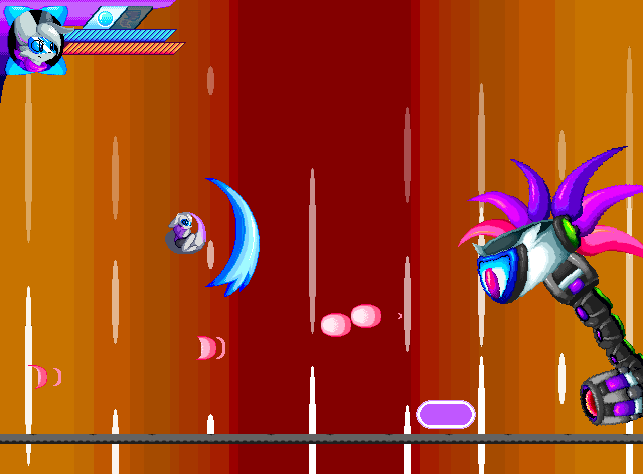 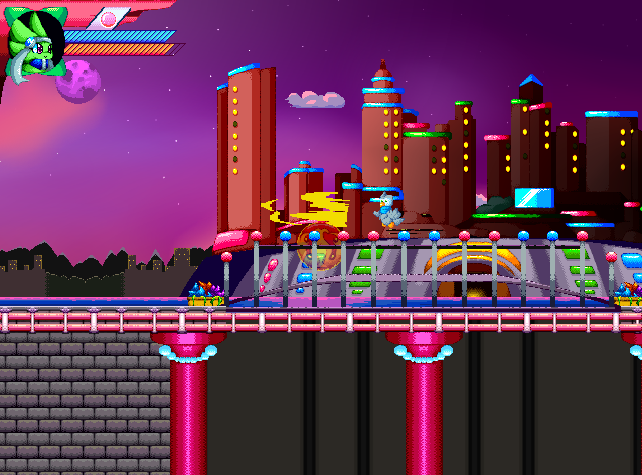 Five stages are playable in this demo--three for Grey and two for Venice. There are some missing voice lines, and some sprites are unfinished or old.
The cart-ride section in Retro Ravine may malfunction if you pause the game during it, so be careful! Currently still working on a fix, but it won't be in SAGE.
Also features a schmup minigame, Macaron Magic! Fully playable and included in Aqua Rocket Base.

For questions and glitch reports please email [email protected] or report in our Discord server, discord.gg/havoc-studios .
Thanks to ViggleWiggle for composing Venice's theme, to Leila "Woofle" Wilson for composing the trailer theme, to Funk Fiction for the Retro Ravine boss theme, and to all of our testers for the project so far!

Let's take this bitwise, since we've got two different characters to look into here. Overall, it's pretty fun to play(and keep in mind when you read this MOUNTAIN OF TEXT that I actually really enjoy the game and anticipate the final product), but there are bits and bobs in places that could use some work~
(Edit: 10/9/19 -- Just correcting noisome errors I made and expanding on text, here or there~)

General
High points:
--Love the atmosphere of the world, its characters and the interactins they have. It two-parts cheesy 90's cartoon(and the Elementals know I love me some cheese~) and three parts world of snark, and it's hilariously and enjoyably over-the-top with both!
-The physics feel great to play given the situations we get into. The melee attack, especially, is fast and reliable, as it should be for a game inspired by Megaman ZX~
-That soundtrack. Yes. Love the music.
-This is, by far, the longest demo I've played and enjoyed at SAGE, and again, I respect and enjoy that~

Tripping Points:
-There are some animations that feel a bit awkward, such as Grey's crouching melee or the Aqua Rocket's rabbit miniboss. It's a minor thing(and I wholly get how painstaking animation and spriting can be, from my own hopeful projects), but they might need a bit of updating?
-Especially during the later end of each characters' stages, the level design may contain a few cheap shots(I remember a place just before Grey's three-switch-gate where an enemy pokes out of a hole a la classic Megaman and Venice's second stage vertical drop tunnel of painful hardlight beams), but it is at least made up for by a decent amount of health pickups, so I can kind of let it slide~


Grey's Side
High Points:
-I almost get a Shinobi vibe from Grey's gameplay, what with the double jump functionality and all, and across the board, his attacks are very reliable, for the most part, in solving the little puzzles and battles along the way. Heck, I've been using the double jump like it's Vectorman, or something: to shred bosses and other enemies into scrap metal~
-After going through most of the game without understanding the Freedom Planet inspiration(and also Megagwolf's Day 2 redo stream lol), it kinda suddenly registered for me. The graphics, the flow of plot, that third boss(especially the third boss)... they all pay clever homage to Ziyo Ling's characters and the story around them, highlighting the good bits while also adding a unique spin for the characters, here in this demo~

Tripping Points(I'm aware it's a lot, but I'm fairly long-winded with expressing points. It's a habit.):
-I see many games, some of them 8/16-bit era, that grant a crouching attack but also have enemies that are too small for the attack to hit. Why? Admittedly, the projectile attack can do the job, but no matter how much I look at that crouching sword attack, it just... doesn't look or feel right. That extends to its animation as well, by the by. I feel like it should be a better sweep than what it is. I will admit this feels a bit like a nitpick, but... maybe it's because of the fact that I've played so many of those games that do have it that I'm fighting muscle memory during play~ :P
-C.Y.G.N.A.Y. has the potential to cheap-shot you during most of its phase transitions, including when battle begins(especially when battle begins) and even when you try to avoid it, you essentially have to have Promethean precognition(which I only selectively have lol) or have played the boss a few times to know when to react. And even then it's attacks will still easily hit you!
-You can aim the projectile attack upward, which itself would be a positive... but we're never told or shown that. I sure didn't know that before the point when this information became mandatory for clearing a stage(Edit: 10/15/19 -- While making a review video for the game, because 'why not?', I stumbled upon the guide within the pause menu which I totally didn't read like some kind of feral. I swear, my short-sightedness can only apply to so many situations before it develops cataracts. READ IT. It tells you quite a lot, some of which I never figured out~). The projectile attack is pretty reliable, but it feels a bit... segmented and slow. Sometimes, it's to the point of feeling unreliable, even when it 's completely reliable(C.Y.G.N.U.S. phase 3 lol). A combo string for the projectile sounds and feels cool, admittedly, but it needs a good visual tell for where in the combo the projectile is, since the game does, indeed, remember that detail.
-Stage 3's rail segment. WHY. The platform is very small, some of the moments where you need to jump feel incredibly precise(read: no room for error whatsoever, even when you get it right) given Grey's jumping abilities and the platform pushes Grey along while active, even if you're not on the platform, and jams your controls a bit while Grey is touching it. Mind you, I know that one is a general Clickteam bug/exploit(Freedom Planet actually had a similar glitch in one area), but I hate this segment with a fiery passion. I did manage to clear it in the end(by letting the platform drop you and exploit the jump bug/exploit that, ironically, was also in Freedom Planet 1, to do it but my point stands stalwart), but this segment might need some fixing.
-Minor nitpicks segment: Grey's delivery on lines could use a little work; there are moments where the tonality is a bit off from the situation(i.e. post-C.Y.G.N.U.S. scene: he comes off more as angry and cocky than he does exhausted, et al). Oh, and a run function might help to speed along segments of walking through corridors, as pacing feels a bit on the sluggish side. I can easily make do without, but as your inspiration is ZX(hint hint), it might be a good thing to have and use to build challenges off of~

Venice's Side
High point:
-My god. The projectile attack is amazing. Heck, Venice's got quite a good moveset for traversing terrain, given that she's so small~


Tripping Point:
-The cupcake platters on the right of the train aren't exactly obvious platforms, given how everything else is shaded. Maybe place an indicator there, or something?
Last edited: Oct 15, 2019
Read more…

LOOK LIKE IS FREEDOM PLANET:3
I think this game needs a lot of work. It feels somewhat slow, heavy, and boring compared to its inspirations. I admire the ambition and the production value. Kudos for getting MegaGWolf and some of the voice actors from Freedom Planet. I also like the art and sprites, and the music is pretty good. I think with a lot of work, this game could be great.

gsman243 said:
I think this game needs a lot of work. It feels somewhat slow, heavy, and boring compared to its inspirations. I admire the ambition and the production value. Kudos for getting MegaGWolf and some of the voice actors from Freedom Planet. I also like the art and sprites, and the music is pretty good. I think with a lot of work, this game could be great.
Click to expand...

OH
This has a lot of potential. However, the physics need a lot of work, especially the jump. Also, I feel like the story takes some very sharp turns, and I'd like to know how the two characters' stories connect. Finally, the bounce platforms in Venice's levels don't have enough height for me to like using them.
You must log in or register to reply here.