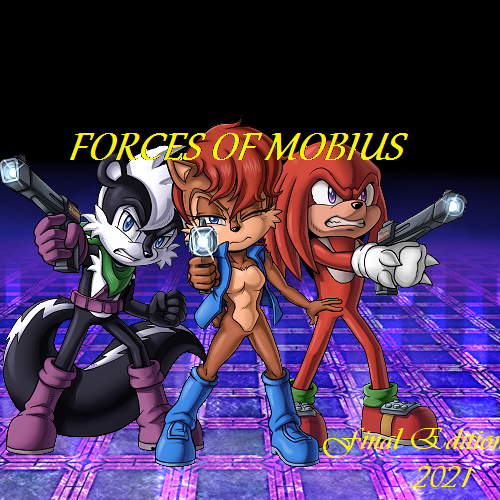 Forces of Mobius was the final RPG I began working with in November 2015, and I released the first edition in September 2017. However, in that edition, I used graphics based on Second Life-models, which turned out to be a bad idea, so in 2019, I released a new version, where all scenes and portraits had been replaced by hand-drawn art, as well as improved battle animations, and several new cutscenes were added, and a bonus chapter for those who complete the game with a good ending. Now, for the Final Edition 2021, we have added more storylines, making the game longer (and better, hopefully, with another six characters playable (Tails and Blaze being two of them...who are the others...?), and a few more dungeons). Yet even more cutscenes have been added, to try to make the experience even more enjoyable. And finally, the endings were improved and extended.

As this is the third game in my triology, playing the first two games, "Chaotix of Tomorrow" and "Twisted Mettle" are not neccessarily required to play through before playing this game, although certain elements are easier to understand if you have played these two games already. Brushed up versions, with improved graphics, easier gameplay and text fonts, were released in 2020.

The story so far is basically that Mobius has been liberated from evil once again, but that evil lurks in the shadows, threating world peace on the planet once more. So, it is up to the player to guide three teams, lead by Sally, Knuckles and Geoffrey St John to liberate the planet and secure freedom once again. There are four endings possible, depending on your actions and decisions! Gear up, and prepare yourself for an adventure across all the corners of Mobius!
Reactions: SoggyDoggy and Sternosaur
Share:
Reddit Pinterest Tumblr WhatsApp Email Link

you're right
Good to finally see this one completed, looking forward to playing it this weekend :D
Okay i hope it's ready next week because i can going to try it out for the main event after with sonic rpg 2019 and 2020 i already finish both this year
I'm not able to download it. :(
I have finish the Forces of mobius edition I love it i have finish with hero story since i started on september ended hero story mode
dark story i have finished it's short but i die once i have to level the stats to finish the game I love it RPG Style love it! Magnus Hagstrom if you are listen to this Love it your putting an effort with your helpers i give 10 out of 10 Rpg Dialogue stuff boss very challenging love it my credit to you my Good Sir congrats this game is made by Magnus Hagstrom love it
The empty maps, frustratingly all-too-common "random encounter" battles and almost entire lack of Sonic styled music (compare this to SatAM RPG, which at least makes the effort to use versions of the cartoon's OST) mar what is otherwise a decent playing experience, I find.
yeah, but it's important not to give up.
That is the best game i have played 2021 MagnusHagstrom thank you for bringing the final edition i love it i have both ended i already credit to you thank you very much!
forces of morbius
You must log in or register to reply here.