The first demo!
Demo 2 can be found here (click)!

Crash N. Tense Adventure, a 2D Crash Bandicoot fangame, inspired by the original Playstation 1 Crash games. Exactly what you'd expect from a Crash game, single player classic platforming, collecting crates, wumpas and crystals, avoiding or attacking enemies with a spin move (not the Sonic variant), and then trying to beat your time in time trials.

Windows .exe
Single player
Platformer
3 completed, full lenght stages
and maaaybe another stage from the earlier videos of the game...
Custom music!
Xbox game controller support!
Made to work with Xbox controller, but some generic USB game controllers work too

Buzz robots in Construct - These enemies don't die from jumping or spinning, use the slide to defeat them.

TNT - Spinning to destroy these crates is dangerous, but jumping on them is... relatively safe. Make sure to explode all of them if you're trying to collect all the crates. Just avoid Nitros though.

Locked crates - These crates don't break from being jumped on or from spinning, use ground pound to break them.

Blue crates - These crates don't count to the box total, just use them to platform your way across.

Aku Aku on Crash' face - When you collect third Aku mask (the thing floating next to you), you'll be invincible for a short time. Use this time to just ram through boxes and enemies while ignoring anything that would normally harm you. This Crash Bandicoot fangame (or, a demo of one) was made by Crash fans, for Crash fans. Hopefully you've liked things so far, we hope to keep working on the game as time permits. The ultimate goal, ofcourse, is to make a 25 stage long game with bosses and all, but being a fangame and made by just a few fans, I hope this demo will do for now. Thanks!


Play with power ups!
I noticed players having trouble enabling the power ups, so here we go!
Normally, you'd unlock these power ups by beating bosses, but since those aren't in the game yet, you can unlock the power ups by doing the following. Do this each time you enter a stage:

In the level select, hold down the pause button, then press the jump button to enter the stage like you would normally (don't let go of the pause button)! You can let go when the game starts to load the stage!

Double Jump
Gives you a double jump. Watch out though, Crash cannot use double jump if he's already falling too fast.

Super Spin / Death Tornado
Gives you a longer spin which can also be used to float. Rapidly tap the spin button or hold it down after initiating the Super Spin.

Super Slide
The most technical Power up. A continuation to the regular slide, keep holding the button or tap it again when performing a slide. Crash slides further and through boxes, and can then perform two additional moves from the Super Slide, either a long jump by hitting the jump button, or a slidespin with the usual spin button, which allows Crash to go fast while spinning - Super Spin cancels the speed up though.


Relic times for time trial.
Access time trial by first clearing the stage with a crystal, then re-enter the stage and collect a yellow clock at the start. Once you then cross the "Start" point, the clock will start ticking. Collect yellow boxes to halt the clock, try to get a good time and aim for the Platinum Relic! For any future updates, demos, and so on, follow:
https://twitter.com/NipponKawai

This was a real treat to play - it harkens back to the original Crash games in so many ways, from gameplay mechanics to level design... but revamps it for new challenges. (The 'Blue Box' platforming challenges are by far my favourite new addition).

The most impressive aspect of the game to me was how fair the challenges were. I was determined to play through each of the levels and go for the box gems because it felt rewarding whenever I finally managed to get past a trouble spot. And if ever I failed, it never felt like the game's fault, but my own skill level that needed to improve. That's something I value a lot in a platformer, and N. Tense pulls it off marvelously.

Only criticism is that on occasion, I would fall through an enemy when I should have hit/bounced off of it (happened at a specific enemy on the final level's death route - image attached for reference), but otherwise, I'd just love to see more of this game and more levels in the future! 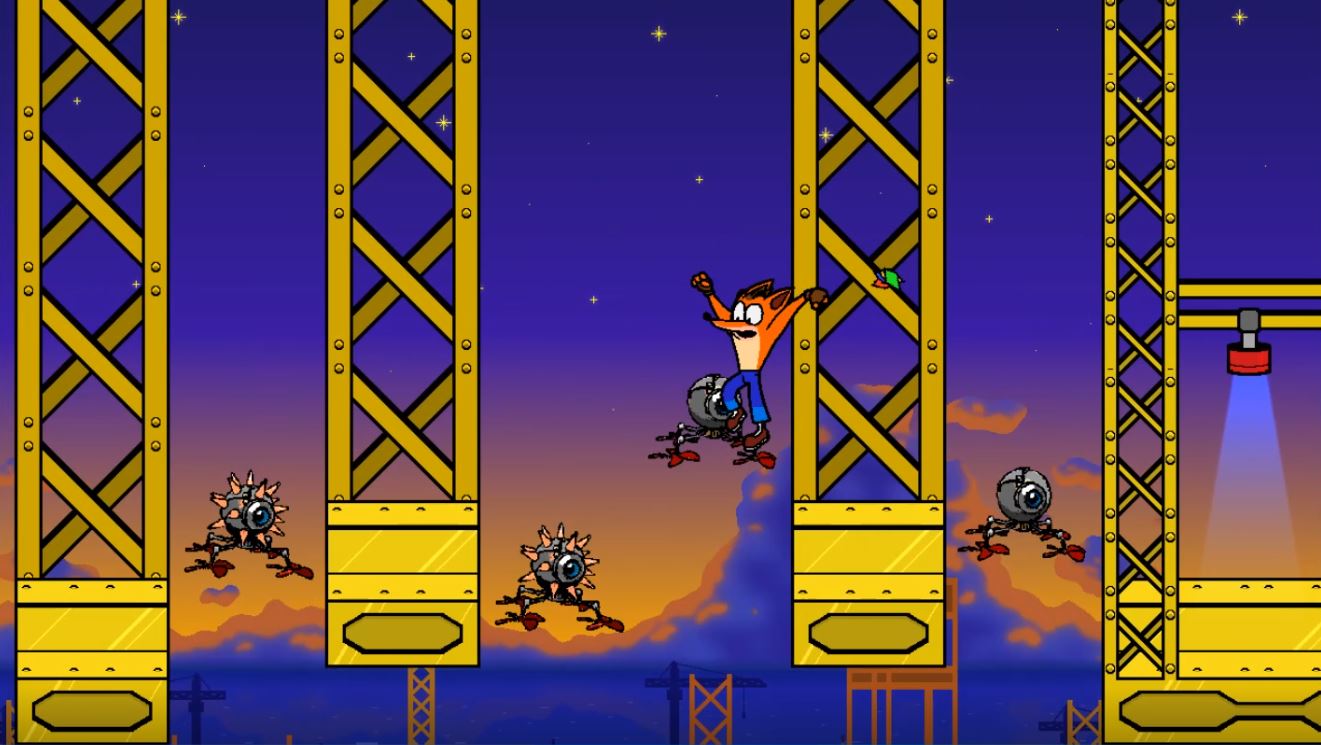 Metalsonic3
I must've put that enemy on the wrong layer or something whooops, either way yeah thanks! It's interesting to read that you found the difficulty fair, I keep feeling like I made this first demo too difficult. I'm honestly afraid of making the game too difficult, I definitely don't want it to turn into a Kaizo Crash or anything like that. Demo 2 will be a tad easier I feel, buuut I suppose I'll find that out for certain once I watch people play it!

Is the game pausing when I press the jump button a known glitch? I'm using a XBox360 controller, but pressing A registers as start.

Beyond that, it looks fantastic so far! I really love the art style (Crash is so adorable here, it might be my favorite style/incarnation of him!)

I can't edit my post, so I'll reply to myself

It seems an update was the culprit, not the game. Got controller working to more comfortably play. And my adoration remains strong! This is really nice all around!!

Well damn yeah, I'd have no idea how I'd even try and fix a glitch like that, so good to hear it wasn't my game, hah! But yeah, thanks!
OoO!!! Amazing!!! The Expressions are awesome! I could definitely see this as a "Crash 4".
cool looks awesome, when will full version be out?

Zenron said:
cool looks awesome, when will full version be out?
Click to expand...

Can't say yet since I'm not sure, still ways off, but I'm hoping to release a new demo at SAGE this year
The Style Visual Is Amazing! 10/10
You must log in or register to reply here.