Just as a quick reminder before reading this article. The 20th Anniversary SAGE Expo event is going to begin on September 5th! That is this Saturday! As a warm-up before the festivities begin, I wanted to go back to a fangame, or in this case, a ROM-Hack of Sonic The Hedgehog 1, that holds a very important role in the fangame community, and as of late, the actual Sonic franchise as a whole. This can arguably be considered as one of the most influential Sonic projects of all time, as it's release (And another ROM Hack called Sonic Boom) would start a sort of "Sonic Hack Resistance", inspiring and leading the way for many new and creative hacks to be created in its wake. Today, we will be taking a more retrospective look into Sonic Megamix. As a quick little side note, I will be looking into the stable 3.0 Genesis version of the game, not the more unstable 4.0 release. As such, some of the things I'm saying may be different depending on which version you do play, so do keep that in mind. Anyway, I feel like it's best to go back into the history of this project to get a better understanding of how impactful this project is.

Sonic Megamix is a wide-scale modification of the original Sonic The Hedgehog for the Sega Genesis, and it's a pretty big one at that. The project began as an entry to the 2005 Sonic Hacking Contest, being developed by a crew named Team Megamix as a start of a series of "Megamix" hacks that would remix the 3 main Sonic platformers. The team consisted of pretty major members of the Sonic Retro community to this very day, such as Cinossu, the amazing MarkeyJester, and the one and only, Stealth, who was then known for his ability to port Knuckles into Sonic 1, something that was considered nearly impossible at the time. If the name Stealth rings any bells, it should, as he would later kickstart the company Headcannon, who would co-develop the Android and iOS ports of Sonic 1 and 2 and would later develop Sonic Mania. Sonic Megamix can be seen as one of the main stepping stones in bringing Sonic's ROM hacking scene to the eyes of the mainstream, as it would become one of the most well-known fangame projects to this very day, and you can even feel fragments of its success in Mania itself. 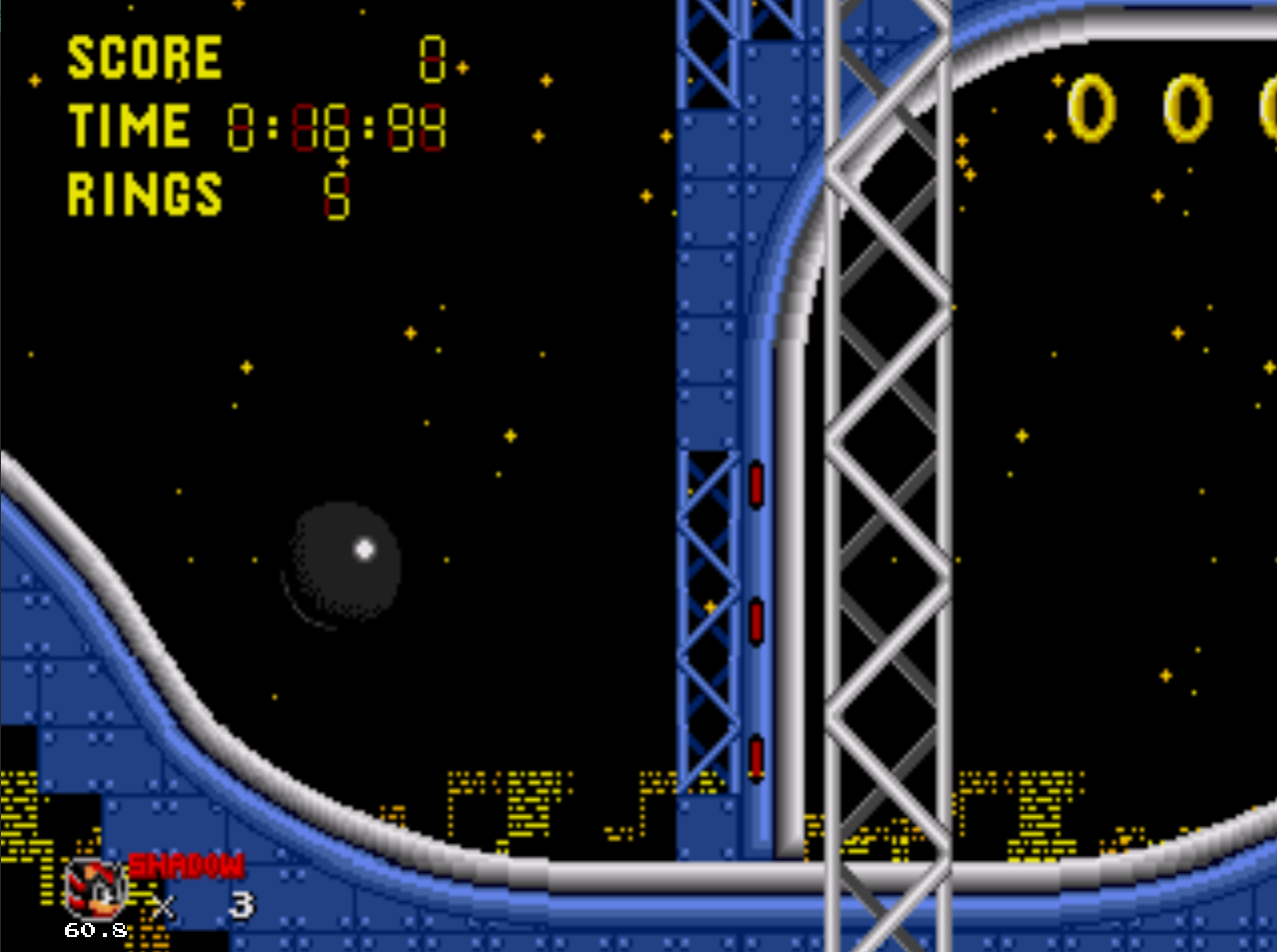 But, what is Sonic Megamix? As stated before, the ROM hack is a massive modification to the original Sonic 1, and as such, uses the original game as a foundation for what it tries to do. However, it adds a lot more to the wonderful dish the game it's based on has to offer, as a huge number of additions, new level layouts, and even extra content create a truly delectable experience. One of the first things you may notice by going into the options menu is that there are 3 main playable characters, Sonic The Hedgehog, the edgy Shadow The Hedgehog, and Mighty the Armadillo, from Knuckles' Chaotix. Each character has their own distinct abilities and differences that make experiencing the game's sprawling levels a unique experience each time you boot the game up. Every character breaks the mold of a "general" classic Sonic game, as Megamix blends the modern movesets into the already excellent gameplay formula the classics created. Sonic gains the jump dash, homing attack, and the light speed dash from the Adventure games, allowing him to either get to top speed very quickly or to reach item boxes that may seem out of reach. Shadow gains a handy double jump and the ability to instantly dash to top speed, at the cost of some of his rings. Lastly, we have Mighty, who plays very similar to Sonic from the 3rd main platformer, only having an insta-shield and a spin dash. However, he has the unique ability to store any shield he obtains and to save them for later use, even being able to use the shield abilities Sonic dropped. There is very little to no cooldown when switching your shields either, so you can switch on the fly and mix different shield abilities. The level design works in every character's favor, and there's even very hidden goodies and secrets for those that mastered the abilities of their chosen character. The soundtrack is just as amazing, with remixed versions of classic Sonic tracks, and even music taken from other Genesis games but retooled to fit the Classic Sonic aesthetic. There are some amazing earworms here.

While Sonic Megamix is packed with highs, there are some lows that newcomers should look out for when picking this game up that may hinder the experience for them. While the level design is amazing, there are points where the game catches "ROM Hack Syndrome", a situation where the hack assumes the person playing the game is automatically good at the game it's based on, therefore making it a more difficult experience, and sometimes in very annoying ways. While Sunset Hill is arguably more straight forward due to it being the introduction level, once you get to Dark Fortress, the 2nd zone of the game, the level design, as the one and only MegaGWolf goes about it, likes to throw a lot of "D*ick Moves" at you. There will be times where you will drop into a bed of spikes you didn't know about, the game specifically trapping you into a situation where you are bound to be hit, and many times where the number of enemies and obstacles are just overwhelming. You should get used to constantly hearing the ring loss sound effect, as you can constantly run into hazards as you are running about. The 3.0 Genesis version also tends to be a bit more ambitious than what it can handle, as there can be a lot of slow down and graphical snafus in places where a lot of things are happening but this tends to be on an occasional basis. All in all, Megamix still to this very day provides a very unique and fun experience in the Sonic fangame landscape. In regards to SAGE's 20 years of being around, celebrating the wonderful projects the blue blur's fans can create every single year, going back to something like this is very important to understand why the Sonic fan scene is so great. With the amazing footnote in Sonic's literal history being paved by this title, even if it shows it's signs of age, Sonic Megamix will continue to hold it's place as one of the most important pieces of Sonic's history, even if it wasn't made by Sonic Team themselves.

Go fetch yourself a copy of Sonic Megamix today. There are two specific versions you can try, but I'll recommend the 3.0 Genesis release, as it tends to be much more stable and easier to get working. But if you are willing to take the plunge, bask in the beauty that is CD audio, and want to be able to play as both Tails and Knuckles in this wonderful masterpiece, then the 4.0 SEGA CD version might be up your ally.

Sonic MegaMix is still my all time favorite sonic hack.
Megamix is the G.O.A.T
You must log in or register to reply here.